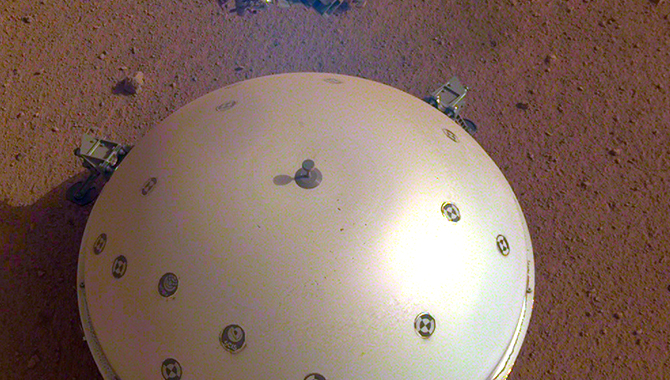 NASA’s InSight lander had only been on the surface of Mars for 128 Martian days, when on April 6 it detected what is believed to be the first quake ever observed by humans. The quake can be heard as a deeper rumbling following sound of Martin winds here. It is then followed by vibrations from the lander’s robotic arm.

The April 6 event, which was faint, was nevertheless detected by the lander’s Seismic Experiment for Interior Structure (SEIS) instrument and appears to have emanated from inside the planet, rather than from surface forces. This is significant because scientists were unsure to what extent Mars was seismically active.

On Earth, quakes are generated by plate movement in the lithosphere. On the Moon—the only other place where humans have observed quakes—they are thought to be caused by tidal forces. The internal structure of Mars is largely unknown. Learning more about the planet’s internal structure is a key part of InSight’s mission.

“The Martian Sol 128 event is exciting because its size and longer duration fit the profile of moonquakes detected on the lunar surface during the Apollo missions,” said Lori Glaze, Planetary Science Division director at NASA Headquarters.

By Earth’s standards, the temblor would have easily been lost among the constant low-level rumbling of, for instance, the California coastline. On Mars, however, where the surface is very quiet and still, InSight’s SEIS is tuned to pick up these faint quakes.

The SEIS is a 65-pound, dome-shaped instrument that was placed on the surface of Mars on December 19, 2018. It is the third seismometer to be placed on Mars by NASA, with Viking 1 and Viking 2 carrying the others in 1976. Results from those earlier efforts were limited because the seismometers remained on the spacecrafts and were vulnerable to atmospheric vibrations. 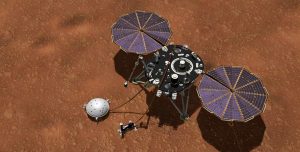 The SEIS has a suite of sensors to help isolate outside effects, such as dust storms and atmospheric turbulence, from seismic motions. Scientists hope to use the SEIS measurements to learn more about the material beneath the surface of Mars and find clues as to how the rocky planet formed.

When seismic waves from a large quake pass through different types of material under the surface, their characteristics will change. These changes can help the InSight team understand the material and structure beneath the surface.

This is exciting because scientists believe the area 620 to 1,250 miles from InSight was geologically active, with volcanos and quakes as recently as 1 million years ago. The SEIS is sensitive enough to detect volcanic plumes if large enough seismic waves were to pass through them.

Decades ago, a series of seismometers placed by Apollo astronauts on the surface of the Moon greatly enhanced scientific understanding of the internal structure of the Moon. The lunar seismometers recorded thousands of quakes and meteorite impacts. From those data points, scientists discerned the Moon’s structure, with a distinct crust about 31 mi thick, and a solid, iron-rich inner core about 150 mi in diameter, surrounded by a fluid outer core of liquid iron.

On Mars, the InSight lander has registered three other seismic signals in the weeks before and after the April 6 event, but those were considerably smaller. The quake on April 6 energized the team.

“We’ve been waiting months for a signal like this,” said Philippe Lognonné, SEIS team lead at the Institut de Physique du Globe de Paris (IPGP) in France. “It’s so exciting to finally have proof that Mars is still seismically active. We’re looking forward to sharing detailed results once we’ve had a chance to analyze them.”