Back to Top
Home/INSIGHT/Perseverance Joins Odyssey, MRO, Curiosity, MAVEN and InSight at Mars 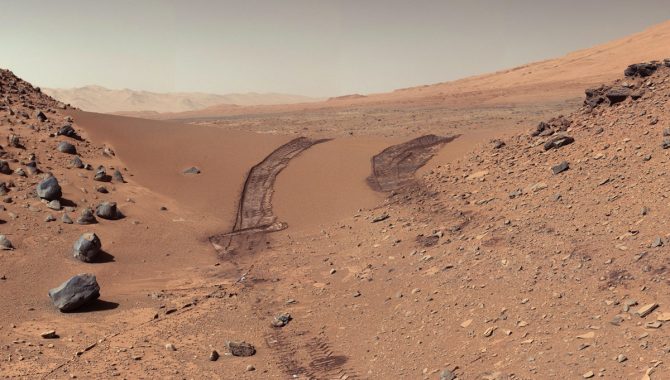 This look back at a dune that NASA's Curiosity Mars rover drove across was taken by the rover's Mast Camera (Mastcam) during the 538th Martian day, or sol, of Curiosity's work on Mars (Feb. 9, 2014).
Credit: NASA/JPL-Caltech/MSSS

NASA’s active missions at the Red Planet responsible for decades of revelations.

When the Perseverance Rover landed at Jezero Crater on February 18, it not only began a bold new chapter of scientific discovery that includes the first effort to bring samples of Martian soil to Earth, it also joined five NASA spacecraft already exploring Mars—three in orbit and two on the surface—that are shedding light on the planet’s past, its present, and what humans will need to know to visit it in the future.

The study of Mars traces all the way to ancient Egypt, China, and Greece, and includes misunderstood observations by early astronomers that fueled decades of stunning speculation by science fiction writers about what the surface of Mars might hold. When NASA’s Viking 1 lander returned the first clear images of the Martian surface in 1976, it was the beginning of a much better understanding of a desolate planet with an intriguing past.

Taken by the Viking 1 lander shortly after it touched down on Mars, this image is the first photograph ever taken from the surface of Mars. It was taken on July 20, 1976.
Credit: NASA

Of all NASA’s spacecraft that are currently active at Mars, Mars Odyssey arrived first, entering orbit on October 24, 2001. Equipped with a Thermal Emission Imaging System, a Gamma Ray Spectrometer, and an experiment to measure radiation levels, Mars Odyssey is approaching an impressive milestone—20 years in active operation at another planet.

During that time, Mars Odyssey has fulfilled all its mission goals, including finding evidence of abundant hydrogen beneath the Martian soil, near the surface, at high latitudes. Later missions confirmed this hydrogen was in the form of large amounts of frozen water, a building block for ancient life and a possible precious resource for any eventual human missions to Mars.

Mars Odyssey continues to gather important data about the climate, geology, and mineralogy of Mars. It has taken thousands of images, contributed to the development of the detailed maps of the Martian surface that helped Perseverance land successfully in difficult terrain, and has served as a key communications relay during the Perseverance landing and for other missions, notably NASA’s Spirit and Opportunity rovers.

Next to Mars was NASA’s Mars Reconnaissance Orbiter (MRO). It joined Mars Odyssey in orbit around Mars on March 10, 2006. MRO is 21 feet tall, with 220 square feet of solar panels that make the spacecraft 45 feet across. Its suite of cameras includes the massive High Resolution Imaging Science Experiment, a powerful telescopic camera that produces sharp images of features on the Martian surface as small as 3 feet across. This dramatic increase in capacity has revealed features on the surface of Mars that appear to be caused by erosion and the long-term presence of water. 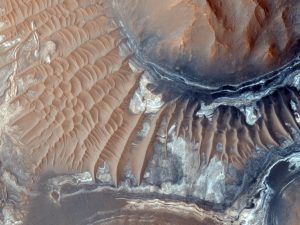 Observations of this region of the Noctis Labyrinthus formation have shown indications of iron-bearing sulfates and phyllosilicate (clay) minerals.
Credit: NASA

MRO’s contributions to scientific understanding of Mars are broad and far-reaching. It has monitored weather on Mars, which includes vast winter dust storms that engulf the planet, photographed avalanches, identified a vast ice cap at the north pole, and photographed features that indicate what forces have shaped—and are shaping—the Martian surface.

“This mission has helped us appreciate how much Mars—a planet that has changed greatly over time—continues to change today,” said Dr. Richard Zurek, on the orbiter’s 10th anniversary at Mars. Zurek is now the Chief Scientist for the Mars Program Office at NASA’s Jet Propulsion Laboratory and continues as the Project Scientist for the Mars Reconnaissance Orbiter.

On August 6, 2012, NASA landed a new generation of rover on Mars. The Mars Science Laboratory Curiosity, at 9-feet, 6-inches long and 8-feet, 10-inches wide, is nearly double the size and four times heavier than earlier rovers. It landed in Gale Crater, an impact site 96 miles in diameter and more than 3.5 billion years old. The crater is an excellent site to search for clues to what Mars was like when the planet was warmer and had abundant surface water.

Curiosity carries an impressive array of scientific instruments to look for evidence that the planet ever had the right conditions to support life. Early in the mission, just 546 yards from the landing site, the rover drilled into a clay deposit and found building blocks of life, such as carbon, nitrogen, oxygen, sulfur, and phosphorus. While climbing a mountain of sedimentary rock that towers three miles above the crater’s floor, Curiosity found evidence the crater had been filled with a lake for millions of years.

MAVEN, an acronym for Mars Atmosphere and Volatile EvolutioN, arrived next at Mars on September 22, 2014. The spacecraft—roughly a 7-feet, 7-inch cube with solar panels expanding its length to 37.5 feet—orbits Mars in a dramatic elliptical, beginning 3,728 miles above the surface and then coming within 93 miles at its nearest point. This orbit sends MAVEN through a broad swath of the Martian atmosphere.

Employing a suite of eight instruments, the probe measures the solar winds and the Martian atmosphere, seeking to learn more about the role the Sun played in Mars’ evolution from a warmer planet with abundant surface water and the building blocks of life into the cold, desolate desert it is now. The team made key discoveries almost immediately.

In 2015, the team published research that indicates the solar wind continues to strip about 100 grams of gas from the Martian atmosphere every second, and that this rate of the erosion increases dramatically during solar storms.

“Like the theft of a few coins from a cash register every day, the loss becomes significant over time,” said Bruce Jakosky, MAVEN principal investigator at the University of Colorado, Boulder, in a 2015 NASA press release. “We’ve seen that the atmospheric erosion increases significantly during solar storms, so we think the loss rate was much higher billions of years ago when the sun was young and more active.” 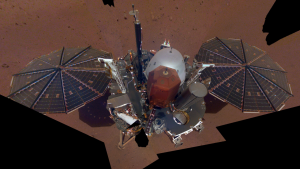 This is NASA InSight’s first full selfie on Mars. It displays the lander’s solar panels and deck. On top of the deck are its science instruments, weather sensor booms and UHF antenna. Image Credit: Nasa/JPL-Caltech

Most recently to Mars before Perseverance was InSight, which landed at Elysium Planitia on November 26, 2018. InSight, which is 19-feet, 8-inches long with its solar panels deployed and about 5-feet wide, was sent to Mars to learn as much as possible about the interior of the planet. InSight is an acronym for Interior Exploration using Seismic Investigations, Geodesy and Heat Transport. Once on the surface, the lander’s 5-feet, 9-inch robotic arm placed a series of experiments on Mars.

Scientists are interested in the interior of Mars because it likely holds important clues as to how all rocky planets formed and evolved. Unlike the Earth, however, which has high internal heat and is very geologically active, Mars has been cooler and much more stable in the billions of years since its formation, preserving much of the historical geological record.

InSight has already identified surface shaking—Marsquakes—that indicate Mars has strong tectonic activity. Unfortunately, the team attempting to drive lander’s heat probe as far as 16 ft below the surface encountered soil unlike any previously found on Mars and discontinued those efforts. But the lander has gathered important data about the atmospheric dynamics, interior structure, and magnetic field at Mars. While the heat probe effort was discontinued, NASA recently extended the mission through 2022 to carry on its other scientific activities.

For more about Perseverance at Jezero Crater, click here. For a podcast discussing the mission’s science objectives, click here.