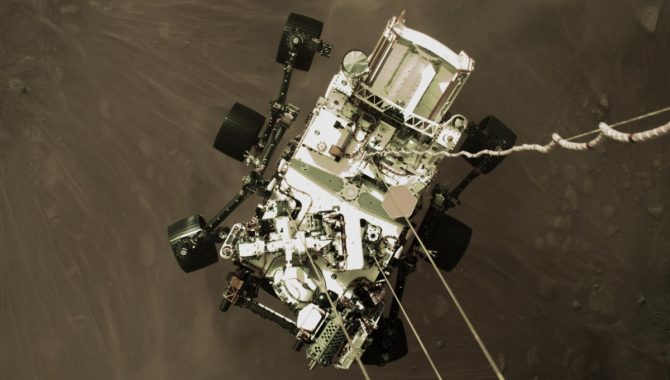 The Perseverance Rover is lowered to the surface of Mars by the Descent Stage, via nylon cables. A camera aboard the descent stage captured this shot.
Credit: NASA/JPL-Caltech

The Martian skies over Jezero Crater were clear on February 18 when the Mars 2020 spacecraft, containing NASA’s Perseverance Rover, streaked into the thin atmosphere travelling more than 12,000 miles an hour, successfully hitting a narrow entry window. With that, a dazzlingly complex automated entry, descent, and landing (EDL) process began, so nerve-wracking it’s known as “seven minutes of terror.”

“These things are so complicated. We’re running a couple million lines of flight software code. I think we had something on the order of 30,000 parameters to set and get them all right,” said Matt Wallace, Deputy Project Manager, Mars 2020, in a NASA press conference.

Mars was about 126 million miles from Earth on February 18. At that distance, a signal sent with the most sophisticated communications technology available takes 11 minutes to reach Earth. Although the spacecraft reported its progress back to the team at NASA’s Jet Propulsion Laboratory via a set of 256 tones, the landing itself depended on the exacting work the team has already performed months and years before.

The spacecraft’s ablative heat shield bore the brunt of the deceleration for about the first four minutes of descent, reaching temperatures in excess of 2,300 degrees Fahrenheit, while protecting the rover within from that intense heat. Thrusters on the backshell fired to steer the spacecraft toward the landing site at Jezero Crater. 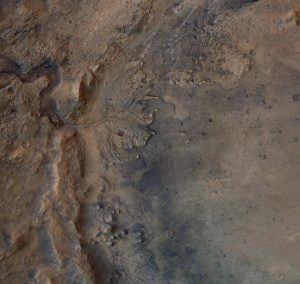 The crater is about 30 miles in diameter, a rugged site on the northwest rim of one of the largest impact craters on Mars. Jezero has intrigued scientists for decades because the fan-delta, clay deposits, and other features signal there likely was a large lake there more than 3.5 billion years ago. This makes it an excellent site to search for any signs of past life on Mars. The site was considered for previous missions to Mars but was ruled out.

“Jezero may look great and promising from a science perspective, but it’s absolutely treacherous for landing,” said Al Chen, Perseverance Entry, Descent, and Landing Lead, in a NASA video. “There’s a cliff wall that’s about 200 feet tall that runs right through the middle of the landing site. There are craters full of sand that, even if we landed in them, we would not be able to drive out… And there are … rock fields that would be a bad day for us if we were to land on them.”

When the spacecraft reached about seven miles above the Martian surface, it had slowed by more than 11,000 miles an hour but was still traveling faster than the speed of sound.  This was when a new technology that reduced the risk of a Jezero Crater landing—Range Trigger—played a role. Unlike past landings on Mars, Perseverance deployed its massive supersonic parachute, 70.5 feet in diameter, not based solely on velocity, but on data that included its location and distance from the landing target.

Slowing dramatically with the parachute deployed, the spacecraft soon jettisoned the heat shield. This exposed Perseverance and another new technology that reduced the risk of landing at Jezero Crater. The Terrain-Relative Navigation system uses a camera to take images during the descent and then compare them with an onboard map developed from satellite images. By matching large hazards, such as hills, craters, and boulders, the spacecraft could pinpoint its location and divert, if necessary, to a safer landing site within the area.

With Perseverance dropping at about 160 miles per hour, the descent stage and rover released from the backshell and parachute, firing eight retrorockets for the last stage of the descent. Soon the Earth dropped below the Martian horizon and Perseverance began relaying signals through the Mars Reconnaissance Orbiter.

About 70 feet above the Martian surface, the Descent Stage began the Sky Crane maneuver, lowering Perseverance down to the surface on long nylon chords, finally depositing it at Jezero Crater at just two miles per hour, the ninth NASA spacecraft to land successfully on Mars. After releasing the chords, the Descent Stage flew a safe distance away before also landing.

“The system performed flawlessly,” Wallace said. “You know, get through 10 or 12 Gs of deceleration, a supersonic parachute deployment, eight big main engines had to fire, our terrain relative navigation hazard avoidance system had to perform the way it was designed, and you know it’s just never easy.”

Decades of future research depend on Perseverance, which will drill and collect core samples, hermetically sealing them in advance of a complex mission in which NASA and the European Space Agency have partnered to send multiple autonomous spacecrafts to Mars to bring the samples to Earth as early as 2031.

“It’s the biggest and best rover we’ve ever sent to Mars and it can really do amazing things…,” said Mike Watkins, Director of JPL, in a NASA video following the landing. “In one sense, the seven minutes of terror are very exciting, but on the other hand, the mission [has] just started.”

For more about Perseverance at Jezero Crater, click here. For a podcast discussing the mission’s science objectives, click here.