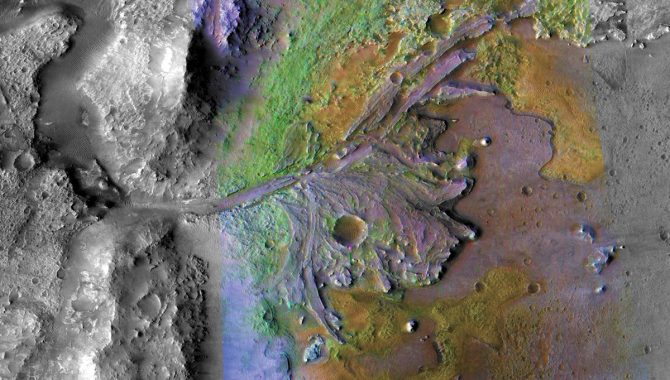 Rover will explore site of ancient lake for signs of past life, measure weather.

Jezero Crater, on the surface of Mars, is about 30 miles in diameter. It is on the northwest rim of the Isidis Planitia impact basin, which is one of the largest impact craters on Mars, at about 930 miles in diameter. The area is marked by a fan-delta, deposits of clays and carbonates, and other features that signal there likely was plentiful surface water there in the planet’s distant past—more than 3.5 billion years ago.

The evidence suggests that Jezero Crater was an ancient lake on Mars—similar to Lake Tahoe on Earth today—making it an excellent site to examine evidence of Mars’ geological past and for indication of whether the planet has ever supported life. It is the target landing site of the Mars 2020 mission, which will employ a variety of tools on the Perseverance Rover to examine the geologically rich terrain.

The mission is currently scheduled to launch on July 17, 2020—the first date of a window that extends until August 5, 2020. The spacecraft will launch atop at Atlas 541 rocket from Cape Canaveral Air Force Station, taking about seven months to reach Mars. The spacecraft is scheduled to enter the thin Martian atmosphere on February 18, 2021, and begin a controlled descent to Jezero Crater, deploying a 70.5 feet diameter supersonic parachute. Near the surface, a “sky crane” maneuver will deploy and lower the rover to the surface.

The site is just north of the Martian equator, in an area of geological diversity that has intrigued scientists for decades. The nearby river delta, cliffs, smaller impact craters, and large boulders make the site challenging for landing. The Mars 2020 team’s entry, descent, and landing (EDL) engineers were able to develop new technologies to greatly improve the accuracy of the descent and landing to identify and avoid known hazards. 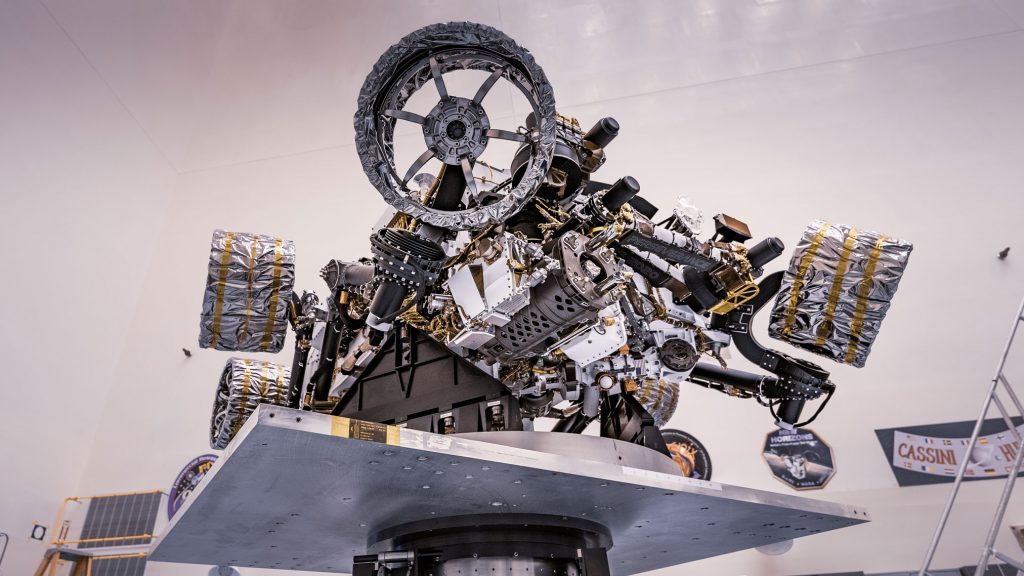 NASA’s Perseverance rover attached to a spin table during a test of its mass properties at the Kennedy Space Center in Florida. The image was taken on April 7, 2020.
Credits: NASA/JPL-Caltech

The spacecraft will employ Terrain-Relative Navigation, an autopilot system in which a camera takes images during the descent and compares them with orbital imagery stored in the onboard computer. By matching large hazards, such as hills and craters, the spacecraft can pinpoint its location and divert, if necessary, to a safer landing site within the area. This technology improves the probability of a safe landing at Jezero Crater by about 15-20 percent to 99 percent.

“The Mars community has long coveted the scientific value of sites such as Jezero Crater, and a previous mission contemplated going there, but the challenges with safely landing were considered prohibitive,” said Ken Farley, project scientist for Mars 2020 at NASA’s Jet Propulsion Laboratory in Pasadena, California in a NASA press release. “But what was once out of reach is now conceivable, thanks to the 2020 engineering team and advances in Mars entry, descent and landing technologies.”

The Perseverance Rover will arrive at Mars with a prime mission of two Earth years, to analyze lake sediments, explore the delta, and traverse the former shorelines to explore the rocky crater rim, which will contain rocks from the deep crust of Mars, violently upended by an object impacting the planet. This area could have contained hot springs at one time, another target in the search for evidence of past life.

Perseverance will be equipped with seven instruments to examine Jezero Crater in unprecedented detail. 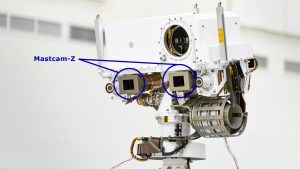 A close-up view of the head of Mars 2020’s remote sensing mast. The gray boxes beneath the mast head are the two Mastcam-Z imagers.
Credit: NASA/JPL-Caltech.

Mounted to the rover’s mast at about 6.5 feet high, the (Mastcam-Z) is an advanced camera system capable of high-definition video, as well as panoramic color and 3D images. It will be used to examine the mineralogy of the Martian surface and help guide the rover. The principal investigator of Mastcam-Z is James Bell, of Arizona State University in Tempe, Arizona.

The Mars Environmental Dynamics Analyzer (MEDA) will measure the weather on Mars, from temperature and humidity to wind speed and direction, and also categorize the size and shape of dust particles. Understanding the weather on Mars is important for a future human mission there. The principal investigator for MEDA is Jose Rodriguez-Manfredi, Centro de Astrobiología, Instituto Nacional de Tecnica Aeroespacial, Spain.

The Mars Oxygen In-Situ Resource Utilization Experiment (MOXIE) will demonstrate technology designed to produce about 10 grams of oxygen in an hour from the carbon dioxide-rich atmosphere of Mars. The experiment will be conducted intermittently over the course of the prime mission. Developing an effective way to produce oxygen on Mars could aid future human missions. The principal investigator for this demonstration is Michael Hecht, Massachusetts Institute of Technology, Cambridge, Massachusetts.

The Planetary Instrument for X-ray Lithochemistry (PIXL) utilizes an X-ray fluorescence spectrometer and high-resolution imaging to zoom in on rock features as small as a grain of sand and identify chemical elements. This combination is used to search for traces of past microbial life on Mars. “If you are looking for signs of ancient life, you want to look at a small scale and get detailed information about chemical elements present,” said Abigail Allwood, of NASA’s Jet Propulsion Laboratory (JPL) in Pasadena, California, who is the principal investigator for this instrument.

The Radar Imager for Mars’ Subsurface Experiment (RIMFAX) is ground-penetrating radar with a penetration depth of more than 30 feet that measure about every four inches that the rover travels, recording geologic features. RIMFAX can also detect any subsurface ice, water, or brine. The principal investigator for RIMFAX is Svein-Erik Hamran, the Norwegian Defense Research Establishment.

The Scanning Habitable Environments with Raman & Luminescence for Organics & Chemicals (SHERLOC) utilizes spectrometers, a laser, and a camera for fine-scale detection of minerals, organic molecules, and signs of past microbial life. Its principal investigator is Luther Beegle, JPL.

The SuperCam also uses a camera, laser, and spectrometers to search for the markers of past life on Mars, able to detect the chemical and mineral signature of objects as small as a pencil point from more than 20 feet away. The principal investigator for SuperCam is Roger Wiens, Los Alamos National Laboratory, Los Alamos, New Mexico.