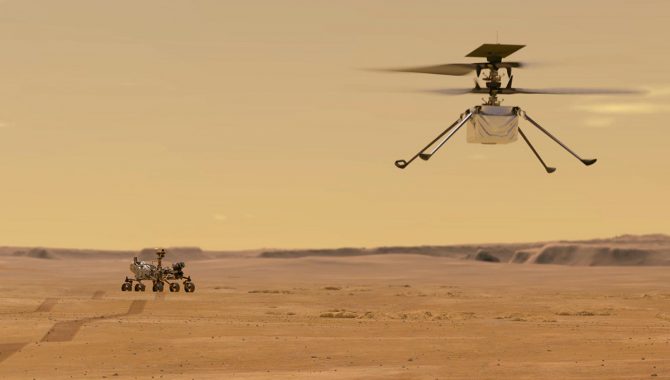 This illustration depicts the upcoming Wright Brothers moment for the team of the Mars Helicopter Ingenuity. NASA is targeting April for the first powered flight by an aircraft on another planet.
Credit: NASA/JPL-Caltech

On December 17, 1903, Orville and Wilbur Wright took turns climbing onto their aircraft on the windswept dunes of North Carolina’s Outer Banks. The Wright Flyer weighed just 605 pounds, its wooden-framed wings spanning more than 40 feet, covered with a double layer of unbleached muslin. The four-cylinder engine that would power the first human flights in a heavier-than-air craft, produced just 12 horsepower. By the end of that day, the brothers’ longest flight covered 852 feet, the maximum altitude was about 10 feet.

Today, a little more than 117 years later—and an average of about 140 million miles from Kitty Hawk, North Carolina—a helicopter known as Ingenuity sits on the surface of Mars. It stands 19 inches tall and weighs about four pounds. Its counter rotating blades span about four feet. In flight, they will spin at approximately 2,400 rpm. Ingenuity arrived at Mars earlier this year, tucked beneath the Perseverance Rover, encased in a protective debris shield. 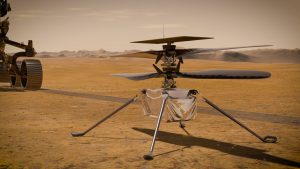 In this illustration, NASA’s Ingenuity Mars Helicopter stands on the Red Planet’s surface as NASA’s Perseverance rover (partially visible on the left) rolls away.
Credit: NASA/JPL-Caltech

“Immediately after the rover landed on February 18, just within a couple of hours, we started to search for a good place to drop off the helicopter,” said Håvard Fjær Grip, Ingenuity Chief Pilot, speaking at a NASA press conference on March 23. The team was searching for a flight zone on Mars, one marked by flat terrain and containing within it an airfield with minimum rocks and obstacles for safe landings and takeoffs. The flight zone needed enough texture that Ingenuity’s camera guidance system could autonomously identify its location and effectively maneuver.

“We began to look for an airfield and surrounding flight zone first using satellite imagery and then, as they became available, images taken by the rover itself after it landed. Using these images and other images, we really scoured this area. We looked at every little rock and pebble within that airfield and measured it before we were finally comfortable saying, ‘yes,’ this is going to be our home base for the helicopter,” Grip said.

Although the site was close, the trip to the airfield took a couple of days for the carefully moving rover. Once the debris shield was dropped, the team began the intricate deployments to place Ingenuity on the Martian surface. The team shifted the helicopter, which traveled to Mars positioned horizontally, to an upright position, and unlocked the landing legs, allowing them to snap into place. After one last electrical charge from Perseverance, Ingenuity was dropped a short distance to the surface of Mars, and Perseverance pulled back to a safe observational distance.

“We’re a separate spacecraft on Mars, on our own energy, and the team couldn’t be happier,” said Theodore Tzanetos, Ingenuity Deputy Operations Lead, in an April 5 briefing by NASA’s Jet Propulsion Laboratory.

“It was a dream come true to see the culmination of the entire team’s hard work really pay off,” Tzanetos said. “Being dropped, right, that’s one huge milestone. But the massive one for us over the last two days has been realizing not only did we drop, but we actually survived the first night. That is huge.”

The first night posed a crucial challenge to Ingenuity because temperatures on Mars plunge to as low as minus 130 degrees Fahrenheit at the site. This extreme cold tested the insulation and heaters the team devised to protect the spacecraft’s precious electronic flight and guidance systems from the Martian night. With those protective systems validated, and confirmation that Ingenuity’s solar array is working as designed, the team can now turn its attention to their upcoming Wright Brothers moment.

“We will go through a number of days of commissioning, approximately a week, where we test our sensors, we test our servo mechanisms, we test the motors to make sure they spin right. And we will be very methodical and event-driven as this engineering experiment unfolds. And then we will be at a point where we will undertake our first flight. And then we will purposefully undertake more aggressive flights once we understand and analyze all the behavior from that first flight,” said Bob Balaram, Chief Engineer of the Mars Helicopter Project, speaking at the March 23 press conference. This puts the first flight target at no earlier than April 11.

Although Ingenuity’s first flight plan is simple, its first flight will be anything but. Over a 30 second flight, the helicopter will take off in the thin Martian atmosphere—at 0.088 psi it’s less than 1 percent of the Earth’s atmospheric pressure—rise to an altitude of 3 meters, hover, turn, adjusting for winds and gusts, and then land, flying autonomously based on commands sent by the team days before.

“I think the biggest challenge will be that we’re flying in the atmosphere of Mars, which has its own dynamics, its own winds, wind gusts and so forth,” Balaram said, noting that although the team tested Ingenuity in a vacuum chamber that simulates the Martian atmosphere, “there’s nothing the beats actually being in the real environments of Mars…”

When Ingenuity takes off later this month, becoming the first powered flight by an aircraft on another planet, it will carry beneath its solar array a small swatch of muslin, about the size of a postage stamp, from the Wright Flyer—a tribute to a trailblazing aircraft and a testament to the staggering advances in aviation in 117 years.