Back to Top
Home/INSIGHT/Mars: The Next Giant Leap for Humanity 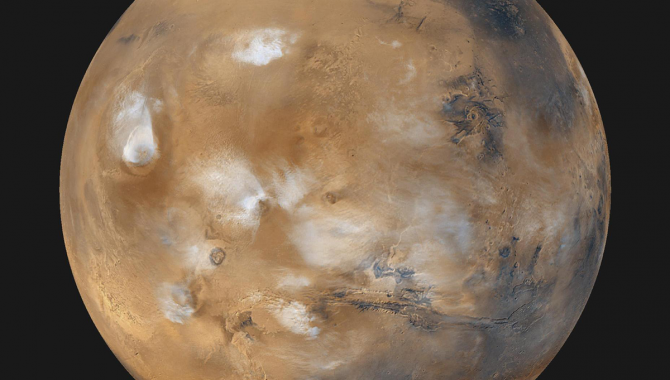 When Artemis I is launched from Kennedy Space Center it will be an important step in NASA’s bold plan to establish a sustained human presence at the Moon and begin developing the experience and capabilities necessary to push even farther into the solar system, to Mars. This sustained presence at the Moon will help answer the challenging questions of a human mission to Mars.

“What kind of food do we need? Do we have the propulsion systems we need to go to Mars? Is the technology there for surface power? These are some of the questions that we’ve got to answer. As we build up our capabilities at the Moon over time, we are working to send humans to Mars, late in the decade of the 2030s,” NASA Administrator Sen. Bill Nelson said recently, addressing the 2021 Humans to Mars Summit.

The virtual summit was sponsored by Explore Mars, Inc., a non-profit organization that advocates for human exploration of Mars by the 2030s. The event brought together leaders and stakeholders in aerospace to discuss the many facets of a human mission to Mars, from the space suits astronauts will wear, to the challenges of building habitats, to the essential partnership between astronauts and robotics in future space exploration. 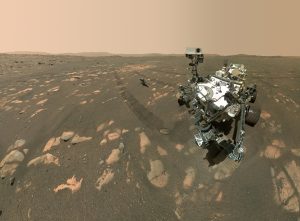 NASA’s Perseverance Mars rover took this selfie on April 6, 2021 with the Ingenuity helicopter about 13 feet (3.9 meters) from the rover.
Credit: NASA

“Today, humanity is closer than ever to those footprints being on Mars,” Nelson said. “It’s not science fiction. It’s real. NASA has a history of setting ambitious goals and then accomplishing them. And the proof is going to be over the next couple of decades. Mars is the next giant leap for humanity.”

NASA has had an impressive year at Mars in 2021, successfully landing the Perseverance Rover near the difficult terrain of Jezero Crater on February 18, with an automated entry, descent, and landing process so nerve-wracking it’s known as “seven minutes of terror.” In April, NASA successfully flew the Ingenuity helicopter on Mars—the first powered flight by a human aircraft on another planet. And earlier this month, the Perseverance Rover team successfully collected the first of many core samples that will be brought to Earth later this decade in an ambitious joint endeavor by NASA and the European Space Agency (ESA) known as the Mars Sample Return (MSR) campaign.

“And so that core sample that has now been processed and packaged, eventually it will return to Earth and it’s going to start to unlock the secrets of Mars in ways that we haven’t been able to,” Nelson said. “This is a momentous achievement. It reflects our nation’s never-ending commitment to discovery and innovation and exploration.”

The Artemis I mission will launch atop the most powerful rocket ever built, NASA’s new Space Launch System, flying without a crew, as did the first missions of Mercury, Gemini and Apollo. The mission’s Orion spacecraft will go farther beyond the Moon than any human-rated spacecraft has ever traveled in a series of elliptical orbits around the Moon. NASA will analyze data from the flight and the return of the mission’s Orion capsule to Earth before Artemis II, a crewed mission currently planned for late 2023 to early 2024, that will be an Apollo 8 moment for a new generation.

In between those flights, NASA will usher in a new era of global science and exploration on the lunar surface with the arrival of the first commercial spacecraft delivering robotic missions for NASA. NASA’s Commercial Lunar Payload Services program is working with a total of 14 companies who are developing landers to provide commercial payload delivery options to bring science experiments, rovers, and more to the surface of the Moon, with NASA as one of what the Agency hopes will be many customers.

“America needs a long-term presence on and around the Moon, both robotic and human, and it’s how we will develop the experience and capabilities to push out then further into the heavens. It’s how we will eventually send the first astronauts to Mars, by the preparation that we do on the Moon. And there’s a lot of work to be done,” Nelson said.

Speaking to students watching the Summit on NASA TV and other outlets, Nelson noted that as part of the Apollo generation, he saw how the lunar missions revolutionized life on Earth, inspiring generations of students to pursue careers in science, technology, engineering, and mathematics, as well as helping to spread new technologies across the U.S. and around the world.

“You students are going to be part of the Artemis generation. Back to the Moon and on to Mars. And that’s going to mean all kinds of new technology, new ways of doing things, new ways of thinking about solving problems. The use of artificial intelligence. What we learn on the Moon will help us be able to sustain human life to go all the way to Mars. And who knows how long to be on the surface before we can return? So, you are going to be a part of the Artemis generation. And this is an exciting time,” he said.