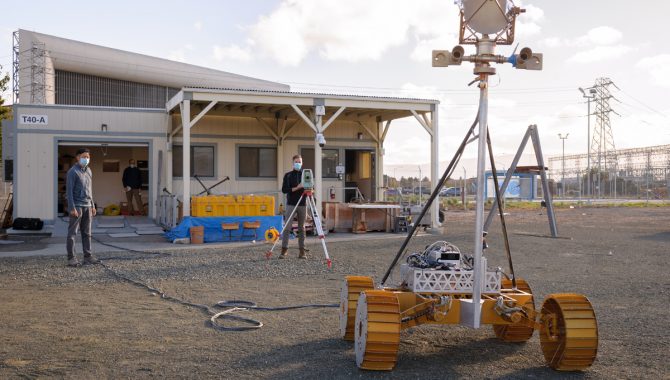 VIPER will map a portion of the lunar surface and drill into suspected pockets of water ice.

When the Apollo astronauts walked the surface of the Moon, marveling at the desolate landscape of ancient dust and boulders beneath a pitch-black sky, they had no way of knowing that far to their south and north at the lunar poles, water ice laid hidden below the surface and in the perpetual shadows of impact craters, protected by foreboding cold as low as -415 degrees Fahrenheit.

It would be four decades before findings from NASA’s Lunar Crater Observation and Sensing Satellite (LCROSS), coupled with findings from other missions and instruments, indicated the presence of a significant amount of water ice on the Moon, perhaps as much as millions of tons. Scientists believe this water ice could serve multiple purposes in supporting a long-term human presence on the Moon and perhaps a future mission to Mars.

To better quantify this water ice, NASA is developing a new rover, VIPER, scheduled to be delivered to the lunar surface near the Moon’s South Pole in late 2023 by aerospace firm Astrobotic, headquartered in Pittsburgh. Astrobotic is working under a $199.5 million contract awarded through NASA’s Commercial Lunar Payload Services (CLPS) initiative.

“VIPER will be the first resource mapping mission on the surface of another celestial body. It represents a new kind of mission for NASA, in which the objectives of advancing science and human exploration are closer than ever,” said Dr. Lori Glaze, Director of NASA’s Science Mission Directorate’s Planetary Science Division, in a NASA video detailing the VIPER mission.

“The measurements that VIPER’s instruments will make can help us understand the source and distribution of the water and other volatiles on the Moon, giving us insight into the evolution of the Moon and the Earth-Moon system,” Glaze said. “The Moon’s water is also a precious resource that could be extracted to support human exploration of the Moon and beyond.” 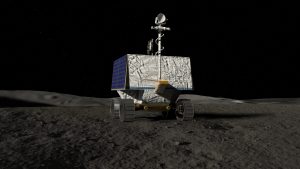 VIPER is an acronym for Volatiles Investigating Polar Exploration Rover. It is a tall, square vehicle at 5 feet long, 5 feet wide, and 8 feet high. It weighs 950 pounds. Its solar-charged battery pack provides 450 watts of power to drive the rover over about 12 miles of lunar surface during a primary mission scheduled to last 100 Earth days, during which it will travel no more than 0.5 miles per hour.

The VIPER will travel on four hollow wheels with ribs for traction in the powdery, abrasive Moon dust. But, because the South Pole of the Moon is a relatively unknown area, difficult to photograph from above because of the persistent darkness and shadow, the team has developed an active and highly flexible suspension system to accommodate a variety of conditions. Each wheel can turn independently and maneuver to free itself from obstacles such as thick dust.

The team has tested the wheel and suspension designs in a dust chamber at NASA’s Johnson Space Center in Houston and at the Simulated Lunar Operations Laboratory at NASA’s Glenn Research Center in Cleveland, Ohio. Engineers tested suspension components in large bins of simulated lunar dust, some with steep slopes. They have evaluated the performance of the vehicle and the suspension’s protective coverings. They have also worked to identify the most effective techniques to maneuver VIPER on the Moon.

Because VIPER will operate in dark and shaded areas of the lunar surface, the rover will be fitted with high-performance arrays of LED lighting that will work in concert with the rover’s cameras to give drivers a clear picture of what is in front of them. A key engineering challenge of the lighting system has been finding a combination of power and placement that minimizes light bouncing off the highly reflective lunar surface.

The rover will carry a suite of sophisticated instruments to identify water ice. The process begins with a Neutron Spectrometer System that will measure changes in the neutrons emitted by the Moon as an indication that the hydrogen below the surface could be impacting the particles.  A Regolith and Ice Drill known as TRIDENT can both drill and hammer into the regolith in an identified area looking for water ice deposits. A brush will clear the residue from the drill onto the lunar surface.

A Near-Infrared Volatiles Spectrometer System will examine the drilling deposits to discern if the hydrogen is in water ice or another form, such as hydroxyls or hydrogen atoms, as well as identifying other compounds, such as ammonia, carbon dioxide, or methane. The spectrometer includes an instrument to produce detailed images that reveal soil composition and a sensor to precisely measure surface temperatures.

“What we learn from VIPER will bring us a step closer to developing a sustainable, long-term human presence on the Moon,” Glaze said.

VIPER is part of the Lunar Discovery and Exploration Program and is managed by the Planetary Science Division of NASA’s Science Mission Directorate at NASA Headquarters in Washington. NASA’s Ames Research Center in California’s Silicon Valley is managing the project, leading the mission’s science, systems engineering, real-time rover surface operations and flight software. The hardware for the rover is being designed and built by NASA’s Johnson Space Center in Houston, while the instruments are provided by Ames, NASA’s Kennedy Space Center in Florida, and commercial partner Honeybee Robotics in Altadena, California.

For more about VIPER, listen to Project Manager Dan Andrews discuss the rover on this episode of the Small Steps, Giant Leaps podcast.