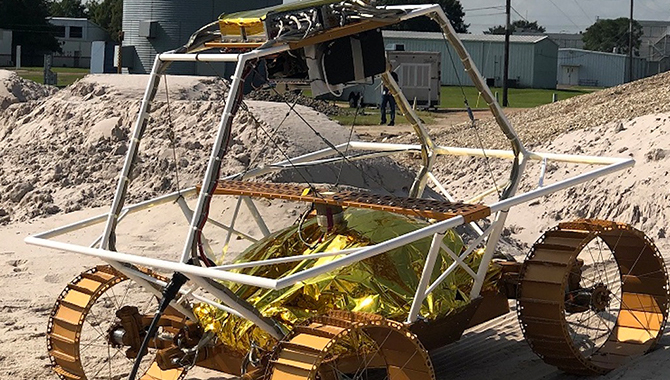 A VIPER engineering model is driven over slopes, textures and soils that simulate the lunar environment to test its mobility systems.
Credit: NASA/Johnson Space Center

Ten years ago, NASA’s Lunar Crater Observation and Sensing Satellite (LCROSS) released a 40 ft long spent Centaur rocket booster on an intentional collision course with the surface of the Moon, bound for a crater known as Cabeus. Trailing the spent booster was a small Shepherding Spacecraft, equipped with a suite of instruments to measure the plume that the impacting Centaur would surely create. What LCROSS recorded in that plume, coupled with data and images from other missions, changed scientific thinking about the Moon forever.

For decades following the Apollo Moon landings, it was believed that the surface of the Moon was completely dry. In the decade since LCROSS, it has been known that there is a significant amount of water ice in the dark craters on the south pole of the Moon, forever shielded from sunlight. Recent estimates place the amount at perhaps millions of tons. The water ice, which scientists believe can serve as a source of not only water and oxygen, but possibly even rocket fuel for future astronauts, seemingly opens the door to a long-term human presence on the Moon and long-range missions to Mars.

Before that, however, NASA must learn more about the water ice and what will be required to free it from the regolith of the Moon. Earlier this month, NASA Administrator Jim Bridenstine announced a new rover mission to examine water ice at the south pole of the Moon.

“But know this, we actually have a mission right now that I’m very pleased to announce. It’s called VIPER. We’re going to take a rover to the Moon with the new program we call CLPS, the Commercial Lunar Payload Services. …We’re going to use that to deliver VIPER to the surface of the moon,” said Bridenstine, addressing the 70th Annual International Astronautical Congress on Public Day.

VIPER, an acronym for Volatiles Investigating Polar Exploration Rover, will be about 4 ft wide and 8 ft long, carrying a suite of instruments to locate, retrieve and analyze the water ice on the Moon. The rover builds upon the impressive successes of the Spirit and Opportunity rovers, which contributed to greater scientific understanding of Mars.

Current plans call for VIPER to be delivered to the south pole of the Moon in 2022 by a CLPS mission. It will rove in both light and dark areas, collecting data for a planned 100 days. It will be equipped with a Neutron Spectrometer System, to detect markers for potential water ice. It will deploy a 3.2 ft long drill known as TRIDENT (The Regolith and Ice Drill for Exploring New Terrain). Samples from Trident will be analyzed with a pair of spectrometers to measure the mass-to-charge ratio of ions to determine chemical identities, analyze mineral and volatile composition, and determine if hydrogen is in water molecules or hydroxyls.

“The key to living on the Moon is water—the same as here on Earth,” said Daniel Andrews, the project manager of the VIPER mission and director of engineering at NASA’s Ames Research Center, in a press release. “Since the confirmation of lunar water ice ten years ago, the question now is if the Moon could really contain the amount of resources we need to live off-world. This rover will help us answer the many questions we have about where the water is, and how much there is for us to use.”

These are important questions because the water ice represents not only life support—oxygen to breathe and water to drink—but also a potential source of rocket fuel. Hydrogen and oxygen are the same fuels that will power the SLS rocket, the most powerful rocket that America has ever built.

The possibility to use resources from the Moon as potential rocket fuel could play an important role in a future mission to Mars. Recent discoveries of likely liquid water deep below the surface of Mars, coupled with the presence of organic compounds on the surface, and the presence methane cycles commensurate with the seasons are intriguing.

“The probability of finding life on another world just went up,” Bridenstine said.