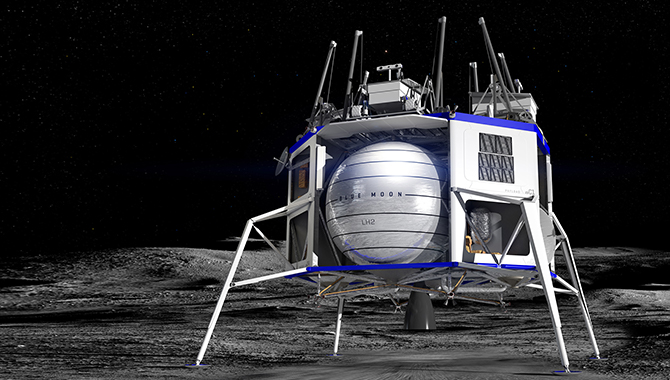 Expansion provides a wide array of approaches to landing science and technology on the Moon.

Years before the first astronauts of NASA’s Artemis program land on the Moon in 2024, the lunar surface will become a much busier place. NASA has increased the number of companies participating in the Commercial Lunar Payload Services (CLPS) initiative  by more than 50 percent, in advance of plans to build to at least two deliveries per year. The companies bring diverse specialties to an initiative scheduled to begin deliveries to the lunar surface in 2021.

The companies’ different strengths provide NASA with diverse options for CLPS deliveries to the lunar surface, according to Steve Clarke, Deputy Associate Administrator for Exploration at NASA’s Science Mission Directorate. “… As NASA continues to lean forward and use commercial services to explore the Moon, we want as many—and as diverse—ideas as we can on the table. So, we look forward to … hearing, reading, assessing those ideas when we put out those task orders,” said Clarke, speaking at a press call announcing the additional companies. 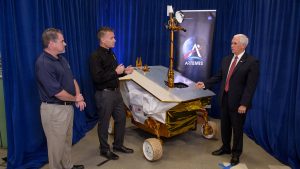 The diverse options for landing on the Moon range from large, potentially reusable spacecrafts, to lunar landers reminiscent of Apollo’s highly successful LEMs, to derivatives of heritage satellite busses. NASA envisions being just one of many customers to which the companies will provide end-to-end lunar landing services, sometimes with multiple customers in a single flight.

“What we do is put out delivery task orders— now to all 14—who can choose to bid… In those task orders will be specific requirements and objectives we want to meet. Some can have specific dates. Some may have specific locations we want to go to on the surface of the Moon. And we will have quite a cadence of task orders,” Clarke said.

“We are looking forward to broad, innovative ideas on achieving the NASA objectives, along with the other commercial customers,” he added.

The CLPS initiative will develop a robust commercial presence in space that will bolster NASA’s goals to have an extended human presence on the Moon and to stage future missions to Mars. The first payloads the CLPS initiative delivers early in the next decade will provide crucial information about the Moon’s resources and prove technologies that NASA will need to eventually travel to Mars. Future payloads could place experiments and tools in advance of the arrival of Artemis astronauts, enhancing their productivity on the lunar surface.

Brent Sherwood, Vice President of Advanced Development Programs at Blue Origin, said the company is honored to be part of the CLPS initiative , noting that their Blue Moon Lander, with its large, open payload deck and ability to power through the lunar night, can handle diverse payloads.

“We especially appreciate NASA’s leadership in doing this in a new way, with public-private partnerships, with a variety of payloads from both commercial and government providers. So, it’s very exciting times,” Sherwood said.

Michael Sims, CEO at Ceres Robotics, who identified his company as one of the smaller entries in the nascent commercial space industry, noted that “…small players bring an agility and a creativity that adds to the mix and can contribute in various, substantial ways in places.”

John Roth, Vice President of Business Development of Space Systems at Sierra Nevada Corporation, said the company is working on multiple options for CLPS payloads, from modified satellite busses for small items, to a larger spacecraft based on the technologies that were developed for the reusable lifting body spaceplane known as Dream Chaser.

“What an exciting program, to give the opportunity to have multiple missions per year going to the lunar surface… This is just a great way to kick off the Moon to Mars process that NASA has in place,” Roth said, noting that the company also has science capabilities, including experience in utilizing in situ resources, something that will be crucial to a long-term human presence on the Moon.

Gwynne Shotwell, President and CEO at SpaceX, noted that the company’s Starship with Super Heavy launch capability far exceeds the mass requirements for CLPS, with the ability to bring about 100 metric tons to the Moon.  “We do think this is a really neat program. CLPS … is an avenue for us to deliver payloads to the surface of the Moon for a customer. And obviously, we’re thrilled that NASA is a potential customer for us in this regard with that vehicle.”

Marco Villa, COO at Tyvak Nano-Satellite Systems, noted that the company will build upon its history of starting with smaller projects and leveraging experience and expertise. “Our lander initially will be something that will cater to the smaller side of payloads, but we have demonstrated in the past our flexibility and ability to scale up,” Villa said.

CLPS is an indefinite-delivery/indefinite-quantity contract running through late 2028, with a combined maximum value of $2.6 billion. Among the task orders the CLPS team will release is the VIPER Rover, a project that will locate and characterize water ice on the Moon’s south pole. The team is also working on new instrument calls.

“We keep the CLPS team very busy and I think we’re going to keep all of the CLPS providers busy on proposing to these task orders,” Clarke said. “I think that’s a good situation to be in, right?”