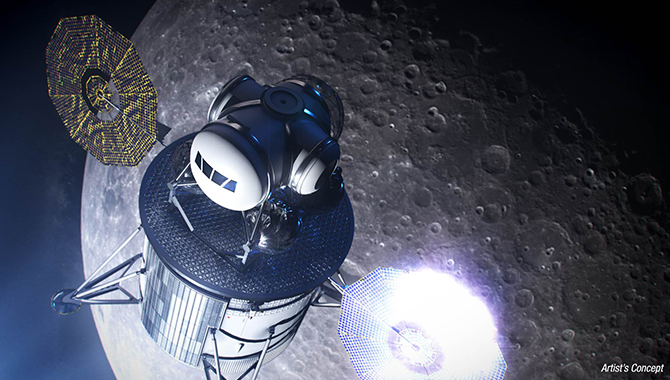 An artist’s concept of the next generation human lunar landing system.
Credit: NASA

Eleven companies will work on aspects of reusable system to shuttle astronauts to and from the Moon.

As NASA ramps up to return humans to the surface of the Moon by 2024, the agency has selected 11 companies to perform research studies and build vehicle prototypes for the next generation of lunar lander. This fits with the agency’s commitment to use public/private partnerships to help build a robust commercial space industry in which NASA is one of many clients. 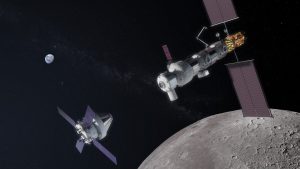 NASA is working to develop a multiple step process to land modern astronauts on the Moon. They will begin on the lunar Gateway, ride in a transfer element into a low-lunar orbit, and then use a descent element to land on the surface. An ascent element will return them to the Gateway. NASA is considering ways to make elements of this system reusable.

“To accelerate our return to the Moon, we are challenging our traditional ways of doing business. We will streamline everything from procurement to partnerships to hardware development and even operations,” said Marshall Smith, director for human lunar exploration programs at NASA Headquarters, in a press release announcing the selection. “Our team is excited to get back to the Moon as quickly as possible, and our public/private partnerships to study human landing systems are an important step in that process.”

The work is being funded through the NextSTEP public-private partnership model, which is designed to foster the development of commercial deep space exploration capability while reducing costs to taxpayers. The companies will receive a total of $45.5 million and are expected to provide at least 20 percent of their project costs.

The task before the companies is formidable. It is remarkably difficult to perform a soft landing on the surface of the Moon. So difficult, in fact, that few countries have ever even attempted it, and fewer have succeeded. Although the Moon’s weak gravity helps during a lunar landing, the lack of atmospheric pressure makes it more difficult.  The rough surface of the Moon is also an impediment, riddled with craters, boulders, and irregularities. Neil Armstrong famously ran down to less than 30 seconds of fuel remaining in Apollo 11’s Lunar Module, looking for an unobstructed landing site. 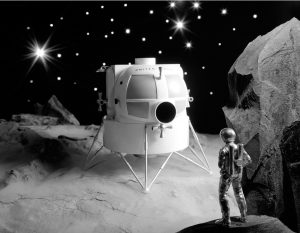 NASA and Grumman Aircraft went through many iterations of the Lunar Module of the Apollo era. Early designs called for a large round cockpit, comfortable seating, and large windows. But as engineers worked through the design, it became clear that the final spacecraft would need to strike a very delicate balance between power, weight and control.

During the development process, which at times was nearly a year behind schedule, the large windows were replaced by much smaller units, the seating was eliminated in favor of a system of support cables, and the module’s legs were reduced from five down to four. The team went so far as to grind away excess material on the module’s welds to remove any weight possible. The work paid off with a lunar module that earned the respect of all who flew it and was instrumental in saving the Apollo 13 astronauts.

“This new approach doesn’t prescribe a specific design or number of elements for the human landing system,” Chavers said in the press release. “NASA needs the system to get our astronauts on the surface and return them home safely, and we’re leaving a lot of the specifics to our commercial partners.”