Back to Top
Home/INSIGHT/This Month in NASA History: Kennedy Sets Course for the Moon 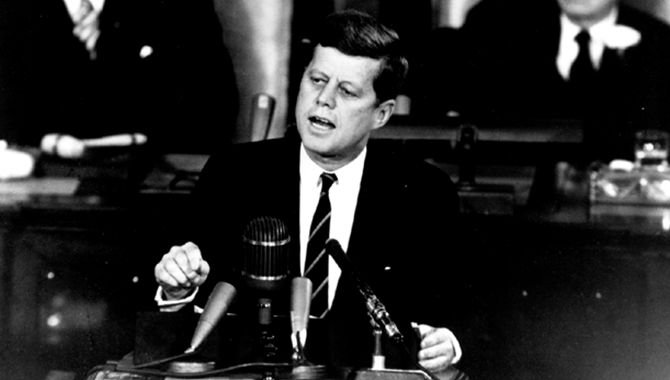 President John F. Kennedy addressed a special joint session of Congress on May 25, 1961, establishing a bold goal for the U.S. to land a human on the Moon and return him safely to Earth by the end of the decade, requesting $9.5 billion to do so.
Credit: NASA

The trajectory of the U.S. space program changed dramatically 58 years ago this month, when President John F. Kennedy addressed a special joint session of Congress and asked for the significant increase in funding—$531 million immediately and as much a $9 billion more over the next five years—needed to land humans on the Moon and bring them home safely.

The address, on May 25, 1961, came at a pivotal moment in the space race. The Soviet Union had held an early advantage in rocket science from the start, launching the first intercontinental ballistic missile in 1957. By the spring of 1961, they had put the first human in space, been first to orbit the Earth, and sent three spacecraft to the Moon, with one crashing into the surface and another returning the first photographs of the far side.

Eight days after the Soviet Union made Yuri Gagarin the first human to orbit the Earth, Kennedy sent a memorandum to Vice President Lyndon B. Johnson, who chaired the National Space Council, asking which of a list of dramatic space missions the U.S. might reasonably complete before the Soviet Union and how much that accomplishment might cost. Landing a human on the Moon was one of the options.

Kennedy also asked Johnson if the U.S. space industry was “working 24 hours a day on existing programs. If not, why not?”

The May 25 address came on the heels of a U.S. space milestone. Alan Shepard became the first human to control a spacecraft in flight and the first American in space just 20 days earlier. Kennedy framed the space race with the Soviet Union as a battle between freedom and tyranny, with the winner having greater geopolitical influence for decades to come.

“Now it is time to take longer strides—time for a great new American enterprise—time for this nation to take a clearly leading role in space achievement, which in many ways may hold the key to our future on Earth,” Kennedy said.

“I believe that this nation should commit itself to achieving the goal, before this decade is out, of landing a man on the moon and returning him safely to the earth. No single space project in this period will be more impressive to mankind, or more important for the long-range exploration of space; and none will be so difficult or expensive to accomplish,” Kennedy said.

He acknowledged that the Soviet Union had a lead in the race and would likely have that lead for years to come. This head start would mean years of impressive successes for the Soviets. 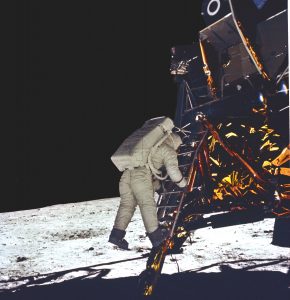 The crowning achievement for the Saturn V rocket came when it launched Apollo 11 astronauts, Neil Armstrong, Edwin (Buzz) Aldrin, and Michael Collins, to the Moon in July 1969. In this photograph, astronaut Aldrin takes his first step onto the surface of the Moon.
Credit: NASA

The U.S. suspected, however, that a crewed mission to the Moon would require a much larger rocket than the Soviet Union possessed at the time, essentially giving the U.S. a more level starting point and the best chance of a victory.

Kennedy recognized that his call to action required approval of Congress. He went so far as to suggest that if the lawmakers and the nation weren’t prepared to commit sufficient resources to the effort, it shouldn’t be undertaken at all.

“It is a most important decision that we make as a nation. But all of you have lived through the last four years and have seen the significance of space and the adventures in space, and no one can predict with certainty what the ultimate meaning will be of mastery of space,” Kennedy said.

“I believe we should go to the moon. But I think every citizen of this country as well as the Members of the Congress should consider the matter carefully in making their judgment, to which we have given attention over many weeks and months, because it is a heavy burden, and there is no sense in agreeing or desiring that the United States take an affirmative position in outer space, unless we are prepared to do the work and bear the burdens to make it successful. If we are not, we should decide today and this year.”

It’s easy to forget, in hindsight, that the nation didn’t yet have a plan to accomplish this risky endeavor. The Apollo program would require a new, larger space capsule, a lunar module, and creation of what is still the largest, most powerful rocket ever built.

The ultimate cost of the Apollo program was more than double Kennedy’s dramatic estimate before Congress that day. But, by accomplishing it “in full view of the world,” it did enhance U.S. stature in the world for decades to come.