Back to Top
Home/INSIGHT/Spotlight on Lessons Learned: SpaceWire Cable Fabrication and Installation 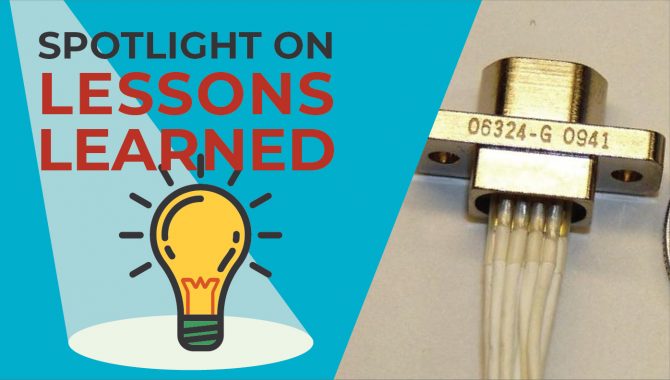 Handling, fabrication, integration and test issues were identified during the use of Gore SpaceWire cable (part number GSC-05-82730-00, size AWG26). One cable stopped functioning after the flight enclosure was shipped to the lab in preparation for system-level vibration testing. Another cable had passed all tests performed during fabrication, but stopped functioning after it was installed in the flight hardware.

After extensive troubleshooting at NASA’s Glenn Research Center indicated a probable short or open on Cable EFA517-001, SpaceWire Cable #3, the cable was taken to the Naval Research Laboratory for further evaluation. Time domain reflectometry tests identified the conductor and location in the cable where an intermittent short existed, and destructive physical analysis confirmed the location of the short.

Cable EFA518 -002, SpaceWire Cable #4, passed all functional tests during assembly, but stopped functioning after it was installed in the flight hardware. Extensive troubleshooting helped determine alcohol used during the post-solder cleaning process was absorbed by the expanded Teflon insulation, wicked its way up the cable, and caused an insulation breakdown and ultimate failure of the cable.