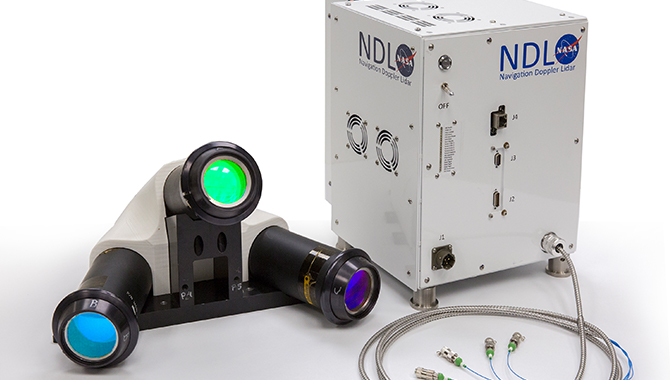 Lidar systems are increasing precision by more than an order of magnitude.

Earlier this year, a massive rocket sled blasted down rails at the Naval Air Weapons Station China Lake in California’s Western Mojave Desert, approximately 150 miles north of Los Angeles. The sled was carrying a NASA target and travelling at 450 miles per hour.

NASA engineers had come to the desert to test the latest iteration of Navigation Doppler Lidar (NDL), a system they have been developing for years to help reduce some of the formidable challenges a team faces when attempting to land on the Moon, Mars or another planetary surface.

“NASA has been relying on radar sensors for the landing vehicles to go to the Moon and other planetary destinations, but there are some limitations with the radar and using the lidar can overcome those limitations,” said Farzin Amzajerdian, NDL Principal Investigator, in a NASA video interview.

Unlike a conventional radar system, with beams that diverge at the ground before bouncing back, the NDL’s laser beams are dramatically more focused, like pencil points, Amzajerdian said. The NDL’s velocity and altitude measurements are greater than an order of magnitude more precise than radar, which has dramatic implications for the future of space exploration.

“Laser sensors can be smaller and more efficient, which is a big deal when you’re going to the Moon or Mars.  Every ounce counts,” Amzajerdian said. In fact, the NDL’s increased precision and significantly reduced mass can impact a mission in many ways.

For instance, by reducing the margin of error in altitude and velocity measurements, some design elements of a spacecraft, such as a lander’s legs, could perhaps be made smaller and lighter.  This reduced mass means a spacecraft might not need to carry as much fuel.

For the series of eight tests in the desert, the NDL unit was mounted to a stationary point as the target blasted toward it. The NDL’s three lenses directed laser light at the rapidly approaching target and the system used the return times and wavelengths to precisely measure its location and speed. It was another success.

The NDL system, which is being developed by a team at NASA’s Langley Research Center, has already been successfully tested when mounted under helicopters, producing high-resolution measurements of altitude, attitude, and velocity.

The NDL is a part of the Safe & Precise Landing – Integrated Capabilities Evolution (SPLICE) project, which is developing a suite of new technologies to increase the precision and reliability of data that aids in landing on the Moon, Mars and other planetary surfaces.

“This recent test validates the NDL’s ability to provide extremely accurate velocity measurements during descent and landing, which is a part of critical testing required to validate all of the SPLICE technologies for future NASA missions,” said John Carson, principal investigator for SPLICE. 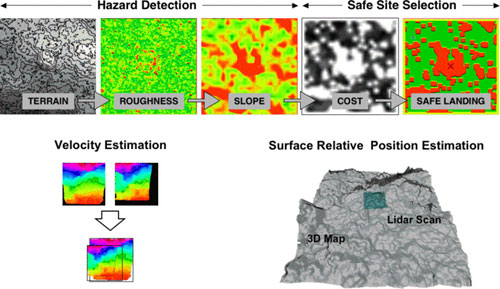 Results from LIDAR-based terrain analysis algorithms developed at JPL. The top of the figure shows the steps necessary to detect landing hazards and select a safe landing site in topographic data provided by a LIDAR.
Credit: NASA

Another key component of SPLICE is the Hazard Detection Lidar (HDL), which will generate an accurate three-dimensional terrain map of a landing site in real-time. This map, with a 50-meter radius, will enable future missions to the Moon to avoid the dangerous situation Apollo 11 astronauts Neil A. Armstrong and Edwin “Buzz” E. Aldrin Jr. encountered when they approached the lunar surface to find the landing site was an unexpected crater, strewn with large boulders.

The HDL utilizes a three-dimensional Imaging Flash Lidar, which creates a landscape model, pixel by pixel, from the characteristics of each laser pulse and return. Such a system would provide astronauts and mission control with a highly accurate, real-time elevation map from data that was collected as the lander was about 1 km above the surface, with ample time to redirect to a better landing site.

The system also includes a high-performance Descent and Landing Computer developed for spaceflight and capable of running the complex algorithms necessary to turn the collected data into actionable information. Current plans call for SPLICE technologies to be included in multiple lunar technology demonstrations and Commercial Lunar Payload Services (CLPS) missions as early as 2021.

Although NDL was developed for landing on the Moon and Mars, it has potential applications much closer to home, Amzajerdian said.

“This is one of those technologies that is finding a lot of spinoff in commercial applications, especially situations where the GPS signal is not reliable, particularly for autonomous aircrafts and driverless cars,” Amzajerdian said. “Derivatives of this technology can play [a] very critical role in enabling safe and efficient driverless cars.”