Back to Top
Home/INSIGHT/VPMC Spotlights Projects at Storied Center

The George C. Marshall Space Flight Center (MSFC) in Huntsville, Alabama has a storied history, from its creation at the dawn of the space age through today, managing many projects at the forefront of space exploration and scientific discovery. From designing the world’s most powerful rocket to examining space with the world’s most powerful X-ray telescope to fabricating rocket engine components with 3-D printing, Marshall has been finding solutions to complex technical challenges for almost 60 years.

On July 31, APPEL Knowledge Services held a Virtual Project Management Challenge titled Spotlight on MSFC Projects: Solving Complex Technical Challenges, focusing on five projects at MSFC. This was the first of several sessions APPEL KS plans, highlighting the work under way at one of NASA’s centers. The July VPMC is available for on-demand viewing.

Host Deana Nunley interviewed 13 experts—including project managers, engineers and scientists—working on the five projects:  Chandra X-ray Observatory, 3-D Printing, SERVIR, SPoRT and the Lynx Mission Concept Study. Taken together, the projects represent a broad swath of NASA’s mission. Across that broad scope, however, the importance of diverse, multi-disciplinary teams and teamwork emerged as a constant.

The Chandra X-ray Observatory has rewritten textbooks since its launch in 1999, from confirming the presence of an elliptical ring of high energy X-rays being emitted by the Crab Nebula pulsar early in the mission to recently detecting gravitational waves from two neutron stars colliding. Martin Weisskopf, Chandra Project Scientist, says the key to the mission’s success was the moment in Chandra’s development “when the various disparate groups involved, … became a team. Not ‘us’ and ‘them’ but ‘we,’ from the prime contractor to the subcontractors to the major ones that were heavily involved, that took such great pride in building [what] one of my postdocs called ‘a scientific Cathedral.’”

Likewise, with 3-D printing, large teams with diverse skillsets must come together to advance a relatively young technology with a higher risk posture but also exceptional potential rewards, including reduced costs and dramatically shortened schedules. “So, for us, one of the key things is making sure broad groups of teams are motivated across it,” says Chris Protz, Team Lead, Propulsion Division, Engine Components Development and Technology Branch.

“Communication across the team is also integral in the process,” adds Paul Gradl, a Senior Propulsion Engineer at MSFC. “Everybody has to understand the common goals of additive manufacturing and the risk involved with it. And that goes right from our detailed designers all the way to the people testing the components. If you understand the risk involved as part of that, and everybody has a common mission that we’re working towards, then we can be more successful in the process.” 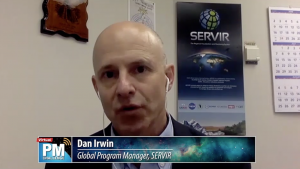 “I’d say that the teams are absolutely key,” says Daniel Irwin, SERVIR Global Program Manager. “But the most important aspect of teams that I found is that they’re interdisciplinary and diverse. And I think that people from diverse backgrounds, from cultures, gender bring such unique views and perspectives. And I think that that’s added just enormous value to SERVIR in the way that we think and the way that we operate.”

The Short-term Prediction Research and Transition Center (SPoRT) is another Earth-centered project featured on the July VPMC. The project works with partners to develop unique uses for observational data from NASA satellites to improve weather forecasting. The project uses an iterative, stakeholder-focused approach to develop unique tools to meet their forecasting needs. One of SPoRT’s many success stories is ongoing efforts to improve hurricane forecasting with microwave technology, according to Chris Hain, Project Scientist/Manager.

“One of the problems with looking at hurricanes, when you’re looking at just, you know, wavelengths from the visible or the infrared is that you can’t really see the internal structure of the storm,” Hain says. Microwaves, however, can pierce through the clouds to the storm’s internal structure. This is offers forecasters important insight into hurricanes, especially those that are rapidly intensifying.

Lynx is unique in the VPMC as it is a large concept study, one of four under consideration for the 2020 Astrophysics Decadal Survey, sponsored by NASA, the National Science Foundation, and the U.S. Department of Energy. With input from the scientific community, the survey will guide scientists, policy makers and federal agencies with a vision forward for astronomy and astrophysics research. If Lynx is selected and built, it will become the largest, most powerful X-ray observatory ever flown, according to Karen Gelmas, Lynx Study Manager.

Together, the guests presented a fascinating picture of the work under way at MSFC. The next installment of the VPMC will look at the work of NASA’s John H. Glenn Research Center near Cleveland.