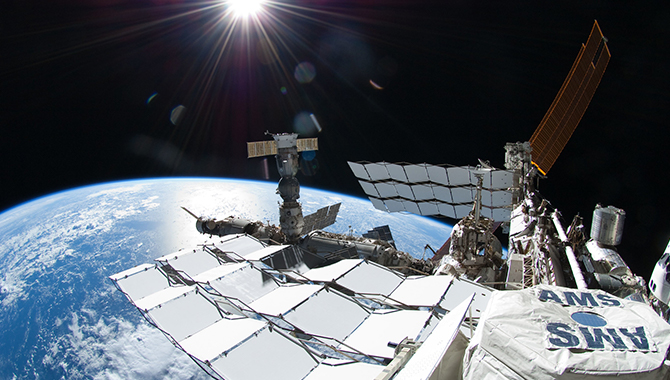 The Alpha Magnetic Spectrometer (AMS) experiment, seen here in 2011, after it was installed at the International Space Station. NASA is conducting a series of spacewalks to install a new cooling system.
Credit: NASA/Ron Garan

A series of ambitious extra-vehicular activities (EVAs) are under way at the International Space Station (ISS) in the closing months of 2019 to repair the Alpha Magnetic Spectrometer (AMS), a cosmic ray detector that has already changed scientific understanding of cosmic ray particles and pointed to a possible role dark matter might play in some of their origins.

The AMS was launched in 2011 aboard the Space Shuttle Endeavor and mounted to the S3 element of the Integrated Struss Structure of the ISS. It has collected data on approximately 140 billion cosmic ray events since then. The AMS comprises a powerful magnet, multiple detectors and 300,000 data channels. The data is processed by 650 microprocessors, which can generate a great deal of heat.

The experiment, which is roughly 16 ft long, 13 ft wide and 10 ft deep, with a mass of about 7.5 tons, is cooled by a two-phase carbon dioxide system. The cooling system, which contains 5 kg of CO2, is driven by four small, redundant pumps.

“The pumps are what started failing…,” said Ken Bollweg, AMS program manager, at a recent NASA press briefing on the AMS EVAs. When the first pump eventually failed in early 2014, the team realized “we had a serious problem to deal with. That’s when we started investigating why did this fail?”

Initial hope that the remaining three pumps might function for a decade were dashed when a second pump failed in a matter of months. At the same time the pumps were failing, it was clear that the AMS, which is a joint effort between NASA and the Department of Energy’s Office of Science, was delivering a wealth of data that could continue yielding scientific discovery for generations to come. Currently, more than 500 physicists from 56 institutions are working with the data, led by principal investigator Samuel Ting, from the Massachusetts Institute of Technology. Ting won the Nobel Prize for physics in 1976.

The AMS creates a magnetic field that alters the path of cosmic ray particles, thus revealing the particle’s electric charge. The experiment also discerns a particle’s mass, velocity, and other key characteristics.

“It’s one of those experiments that’s kind of threatening to rewrite our physics books, and the way we think about particle physics,” said Kenny Todd, space station operations integration manager, in the briefing. “We’re really excited to have AMS on [the ISS] and hopefully, with this set of repairs, we’ll continue to collect data for years to come.”

Those repairs, which have been developed, planned, and practiced for years, will constitute a series of intricate EVAs, made more challenging because the AMS was not designed for repairs in space.

“None of the AMS area that we’re going to was designed [for EVAs]. So, we had to go off and figure out how to create a work site. We had to build new handrails to be able to install on existing hardware, had to deal with existing sharp edges and, a lot of cases, we’re creating new sharp edges, using tools that have sharp edges on them,” said Tara Jochim, AMS spacewalk repair project manager. “We did as much as we could to minimize that risk to the crewmember and of course to the mission success of the payload itself. But they are certainly very challenging, technically difficult EVA’s.”

The first EVA was successfully completed on November 15, when ESA astronaut Luca Parmitano, the Commander of ISS Expedition 61, and NASA Flight Engineer Andrew Morgan removed a debris shield from the side of the AMS. Parmitano removed the shield, which is 50 in. tall, 25 in. wide, and 7 in. thick, handing it to Morgan, who discarded it into space, where it will be captured by the Earth’s gravity and burn up upon reentry.

Parmitano and Morgan also installed a series of handrails that will aid their mobility in future EVAs. The first EVA was so successful that they moved on to work originally scheduled for the second EVA, including removing a small carbon fiber panel and jettisoning it as well. The carbon fiber panel was not designed to be removed, and so, after removing several fasteners, Parmitano had to bend the panel until it snapped off.

The second EVA, currently scheduled for November 22, will focus on preparing the plumbing within the AMS to join to the new cooling system and pumps.

With the carbon fiber panel removed and the tubes cut, current plans are for the third EVA to focus on installing the new cooling system and connecting the four new pumps. The pumps themselves are about 3.5 in. long, and 1.5 in. diameter, with an impeller spinning at about 6,000 rpm, moving 2 grams per second of CO2.

“This is all new device. It’s not only replacing the pumps, it’s replacing the accumulator, it’s replacing heat exchangers, heaters, valves,” said Bollweg. The cooling system, which is about 42 in. long, by 32 in. wide by 16 in. deep, with a mass of 750 pounds, will be attached to the outside of AMS. The device will improve cooling significantly and extend the life of the AMS experiment through the foreseen life of the ISS itself.

The repairs are being attempted at a busy time for the ISS, Todd noted, with SpaceX CRS-19 expected to arrive on December 7. That flight will deliver “an incredible amount of research,” he said. “In addition to that, we’re looking at potentially the first flight of the Boeing Starliner … near the end of the year. We’re going to keep working toward that milestone and doing the things we need to do on schedule to be able to support that as they continue to prep that vehicle.”