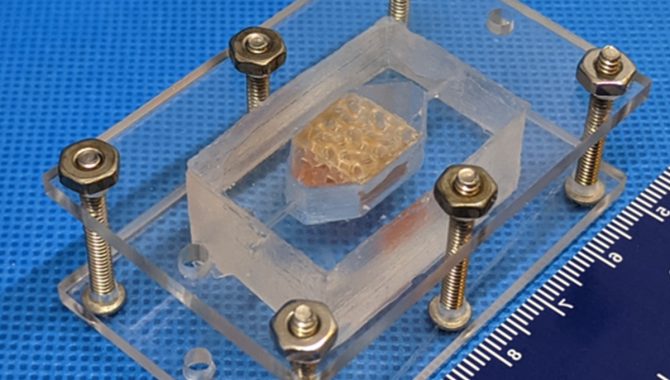 Winners will advance the technology aboard the International Space Station.

When NASA announced the Vascular Tissue Challenge in 2016, nobody was sure that there would be a winner. The goal was as ambitious as it was important—produce metabolically functional, vascularized tissue more than 1 cm thick and capable of surviving for 30 days. Such vascularized tissue could lead to organ analogues that would help NASA research the effects of deep space travel on the human body as the Agency prepares to establish a long-term presence at the Moon and eventually send humans to Mars. It would also represent an important advance in the field of regenerative medicine on Earth.

Almost exactly 5 years later, NASA announced on June 10 that two teams from the Wake Forest Institute for Regenerative Medicine, working independently with different approaches, had successfully completed the challenge, 3D-printing vascularized liver tissue. The first to achieve the goal, Team Winston, will receive $300,000 and the opportunity to advance the technology aboard the International Space Station. The second team, WFIRM, will receive $100,000.

“These teams have worked through many setbacks associated with the global pandemic, often with limited or no access to their labs,” said James L. Reuter, Associate Administrator for NASA’s Space Technology Mission Directorate, announcing the winners at a NASA press conference. “Their dedication to the medical and space communities is an example of how, even through adversity, the American people will persevere. With the ability to regenerate thick vascularized tissue we can make an enormous impact on Earth and in space.”

The winning team took a stepwise approach, settling on a gyroid shape because its interconnecting, wave-like tubes would provide the best fluid flow and nutrient delivery through the samples, according to Kelsey Willson, a graduate student at Wake Forest University who led Team Winston. The team developed its samples using a modified gelatin, building a circulation system that mimics that seen in the human body.

“We work on these projects for years, and you spend hours and hours in the lab, but it is absolutely amazing to get something all the way to the point that we can really bring it to the public,” Willson said at a NASA event announcing the winners.

This is an opportune time for vascularized tissue research to arrive at the International Space Station. The ISS team believes that commercial regenerative tissue research could play a key role in the station’s future. And, NASA’s Commercial Crew program, launching NASA astronauts from U.S. soil for the first time in decades, has led to seven-member crews on the ISS, maximizing its research capacity in low Earth orbit.

“The potential to study this technology further in space is really exciting,” said Robyn Gatens, director of the International Space Station at NASA Headquarters. “We’ve now flown over 3,000 research projects to the ISS. … What we’ve learned is that when we remove gravity from the equation, as we can in the microgravity environment of the space station, we can learn new things and expand our knowledge.”

“We think that regenerative medicine is one of the most promising potential applications [for the ISS] with huge potential benefits to life here on Earth,” Gatens said. “It could be possible to print or grow complex tissue even better in space than we can here on Earth and we’re anxious to learn more about how to do that.”

The ISS is at the center of research into the challenges NASA astronauts will face—such as extended radiation exposure and microgravity deconditioning—when they establish a long-term presence at the Moon and travel deeper into space. This challenge has provided a possible starting point in the development organ analogues to advance that research and in the development of strategies to protect astronauts. It also has profound implications on Earth.

“In the next 5 to 10 years we will be able to make tissue patches to print out, for instance, liver tissue that would be added to a sick liver and that liver could potentially recover itself because of the crutch-like capability of the liver patch. Or it would allow for more time for transplants to become available,” said David Gobel, co-founder and CEO of the Methuselah Foundation, a nonprofit organization that partnered with NASA for the competition and recruited the nine-member judging panel.

“In the next 10 to 15 years, I would say that we would be able to get whole livers and whole kidneys,” added Gobel. Such a breakthrough would dramatically change the lives of the tens of thousands of people on organ transplant waiting lists and the far greater number who don’t qualify to make the list at all.

“This is a very promising steppingstone for future tissue engineering studies,” Reuter said. “These teams were able to 3-D print functional complex human tissues similar to those found in vital human organs. They nurtured them to survive and be functional after a 30-day trial, which as we saw during the competition is exceptionally challenging.”