Back to Top
Home/INSIGHT/Flagship Telescopes Reveal the Unexpected 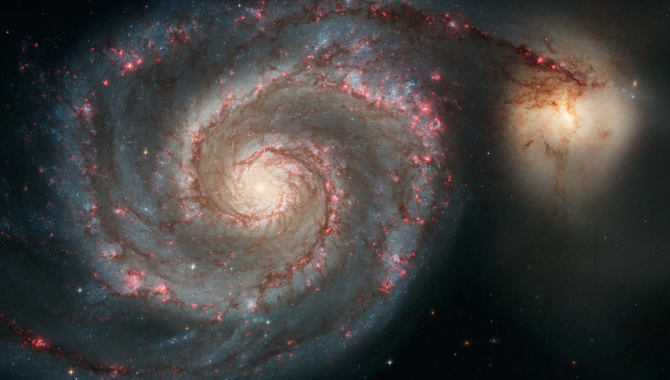 This spiral galaxy, M51, also known as the Whirlpool Galaxy, has come into much sharper focus as centuries of innovation in telescopes has revealed increasing levels of detail.
Credit: NASA

Astronomers will use Webb to continue the long search for early galaxies.

When NASA and the European Space Agency (ESA) launch the James Webb Space Telescope from the Centre Spatial Guyanais in French Guiana, it will be by far the largest, most technically complex telescope ever sent into space, with a goal of observing the faint infrared light emitted from galaxies 13.5 billion years ago. The roots of this goal stretch 176 years into the past, to a country estate in Ireland. 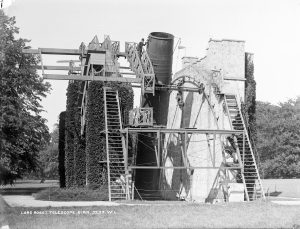 The Leviathan of Parsonstown, the 6 foot telescope of William Parsons, 3rd Earl of Rosse (1800-1867). The photo also features Lawrence Parsons, 4th Earl of Rosse (1840-1908).
Credit: National Library of Ireland on The Commons

That’s where William Parsons, the third Earl of Rosse, built the Leviathan of Parsonstown, the largest telescope on Earth from 1845 until 1917. Just as Webb’s 18-segment, gold-coated beryllium primary mirror stands as a feat of modern engineering, the Leviathan’s 72-inch diameter mirror—5-inch-thick cast metal alloy weighing nearly 3 tons—stretched the limits of manufacturing techniques at the time. The wooden tube telescope was about 54 feet long, its 12 tons supported between thick masonry walls via 150 tons of iron structure.

One night, perched perilously atop metal works, Parsons trained the telescope at an object Charles Messier discovered more than 70 years earlier. Using the fabulous power of this new telescope, Parsons observed and sketched the first drawings of a swirling shaped nebula with stars visible in the radial arms. In the decades to come, astronomers would begin to debate the size of the Universe and if objects such as this—now known as the Whirlpool Galaxy—were nearby gas clouds or larger objects outside our own galaxy.

By 1917, the world had a new largest telescope. The Hooker Telescope at the Mount Wilson Observatory is significantly larger and more powerful than the Leviathan. Using this extra power, astronomer Edwin Hubble calculated that several of these nebulae were indeed galaxies far outside our own. Hubble later made the stunning observation that these galaxies are moving away from Earth, and that the most distant galaxies are moving away fastest.

“He discovers the expansion of the universe with this new telescope that he has,” said Eric Smith, Program Scientist for the James Webb Space Telescope, speaking at a NASA press conference.

“You can actually trace the arc of a lot of technology and science in astronomy for the 20th Century, …[to] a chase of galaxies, seeking an ever farther galaxy, trying to find the very first galaxies,” Smith said, noting that the chase now needs a telescope even more powerful than the Hubble Space Telescope. “That’s the James Webb Space Telescope.”

“…Not only will it help us complete this chase of galaxies, but it promises to allow us to explore the atmospheres of exoplanets, alien worlds, [and] study how stars form in our own galaxy,” Smith said.

Astronomers will use Webb’s instruments to explore some of astronomy’s biggest questions: How do stars form? Where do black holes come from? How do galaxies evolve? How do newer stars grow with their young planets? What elements comprise the atmospheres of exoplanets?

“… This telescope is so powerful that if you were a bumblebee hovering 240,000 miles away, … we would be able to see you,” said John C. Mather, Webb Senior Project Scientist, speaking at a NASA press conference. “So, what are we going to do with this great telescope? We’re going to look at everything there is in the universe that we can see.”

The predominant theory is that the early universe, after the Big Bang but before the first galaxies and stars formed, was very hot and very dense. This was supported by NASA’s Cosmic Background Explorer mission from 1989 to 1993, for which Mather shared the 2006 Nobel Prize in Physics with astrophysicist George F. Smoot. “We saw that not only is this Big Bang story about right, but it has the primordial seeds that would grow up to become galaxies.” 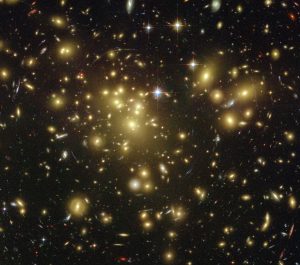 A massive cluster of yellowish galaxies is seemingly caught in a spider web of eerily distorted background galaxies in the left-hand image, taken with the Advanced Camera for Surveys ACS aboard NASA Hubble Space Telescope.
Credit: NASA

“We want to know; how did we get here from the Big Bang? How did that work? So, we will look. We have ideas. We have predictions, but we don’t honestly know. … We also want to look at things nearby to us—clouds of glowing gas … where we know … stars are being born today,” Mather said.

Given the long history of new flagship telescopes yielding amazing discoveries, and Webb’s broad capabilities, thousands of scientists from around the world are eagerly awaiting Webb’s commissioning. Some of their questions are as old as the first humans gazing at the night sky in wonder, others were suggested by recent observations from the Hubble Space Telescope.

“When Hubble was launched in 1990, we had not discovered dark energy, this mysterious force that pushes the universe apart. But Hubble discovered that. We didn’t know of any exoplanet in existence, but today we know thousands of exoplanets,” said Klaus Pontoppidan, Webb Project Scientist, Space Telescope Science Institute, noting that 400 individual investigations are already lined up for Webb’s first year.

“In some of those programs, we’ll address questions that we did not know that we had when Webb was first designed, but it has the power to address them,” Pontoppidan said. “We’re about to go on this amazing journey of discovery. We really mean discovery because Webb has this broad power to reveal the unexpected. We can plan what we think we’re going to see, but at the end of the day we know that nature will surprise us, more often than not,” Pontoppidan said.