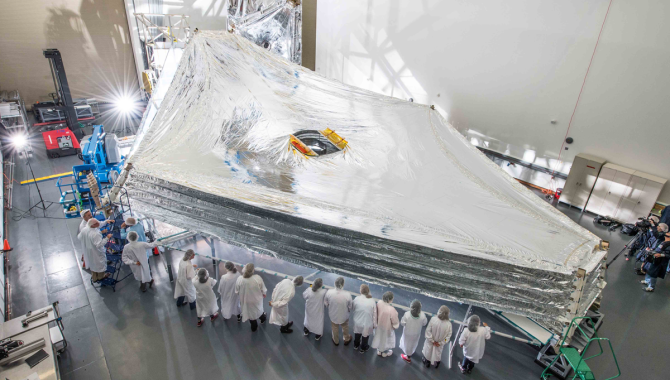 The sunshield on NASA's James Webb Space Telescope, shown here stacked and expanded in a cleanroom in the Northrop Grumman facility in Redondo Beach, California, will be folded up during launch and deploy in space.
Credit: NASA

The James Webb Space Telescope was designed to accomplish ambitious science goals, including looking 13.5 billion years into the past, when scientist theorize that the early Universe was just beginning to cool enough to form the first galaxies and later massive Suns, which were perhaps as much as 300 times larger than our own Sun and relatively short-lived, ending as supernovas in just a few million years.

But long before Webb can ever rewrite scientific understanding of the early Universe, it will perform the most complex sequence of deployments ever attempted for a space mission. When it launches from the Centre Spatial Guyanais in French Guiana aboard an Ariane 5 rocket provided by the European Space Agency (ESA), it will be by far the largest, most technically complex telescope ever sent into space, folded into a much smaller space. 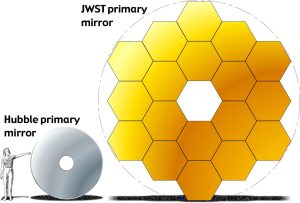 The fully deployed observatory will be about three stories tall, with a total payload mass of roughly 6 tons. Webb’s gold-coated beryllium primary mirror, made of 18 segments, deploys to a diameter of 21.3 ft. The observatory is protected from exposure to the Sun by a massive 69.5 ft. by 46.5 ft. sunshield comprising five layers of Kapton, a high-performance polyimide film about the thickness of a human hair. The Ariane 5’s faring is just 18 ft. in diameter.

“We built a world-class infrared telescope,” said Mike Menzel, Webb Lead Mission Systems Engineer, speaking at a NASA press conference. “We built it, we’ve aligned it, we’ve tested it, we’ve proved it worked. Now, we’re going to have to break it up, fold up, and actually rebuild it on orbit—rebuild it, realign it, retune it, and get it to work robotically on orbit. That’s never been done before.”

Adding to this engineering challenge, the observatory will be rebuilt on orbit to exacting standards. A ray of light hitting the mirror and traveling through the telescope has a margin of error no greater than 150 nanometers— about 1/670 of the thickness of a piece of paper.

Likewise, the sunshield’s performance is predicated on the thin layers unfolding and being held in suspension some distance from the other layers. Solar radiation that passes through an upper layer will bounce between that layer and the layer immediately beneath it until it exits out the sides. In this way, the 200,000 watts of solar radiation the top layer is exposed to is reduced to just .02 watts going through the bottom layer.

“So, if it was suntan lotion, it would have an SPF of about 10 million,” Menzel said.

The sunshield is critical to Webb’s ability to detect the infrared wavelengths that have been traveling 13.5 billion years from the first galaxies and suns to reach our solar system. To be able to detect these faint signals, Webb’s mirrors and its instruments must be kept about 40° Kelvin above absolute zero, according to Begoña Vila, Webb Instrument Systems Engineer. “That’s about -385° Fahrenheit…,” she said.

Menzel likened unfolding the complex sunshield in space to attempting to push a string across a table—difficult to predict the shapes it will take during the process, but possible to constrain.

“We can try to prevent it from going in places that we don’t want it to go—places where it could snag or tear or maybe impede the deployment of other members. And we do that by building in restraint mechanisms. There’s going to be a lot of these restraint mechanisms when you’re talking [about] something the size of a tennis court,” Menzel said.

These restraints include 140 release mechanisms, about 70 hinge assemblies, eight deployment motors, several fairings, as well as springs, gears, and about 400 pulleys serviced by 90 cables totaling 1,312 ft. The restraint mechanisms make up about 80 percent of Webb’s 344 single point-failures.

More than 10,000 people have worked at some point on the project over more than 20 years, according to Bill Ochs, Webb Project Manager. They have faced not only technical challenges, but also tornadoes, lightning strikes, a blizzard, a hurricane, and finally a global pandemic, to reach the launch site in French Guiana on October 5, where the team is now working toward launch.

The fully assembled James Webb Space Telescope with its sunshield and unitized pallet structures that will fold up around the telescope for launch.
Credit: NASA

All the while, the observatory will be traveling to a spot 1 million miles from Earth, the second LaGrange point in Earth’s orbit around the Sun. There the gravitational forces of the Sun and Earth and the orbital motion of Webb will balance, causing it to orbit the Sun approximately in line with Earth’s orbit and requiring only minimal station keeping about once every 21 days.

Once commissioned, the James Webb Space Telescope will be the premier observatory for the next decade. The first year of scientific exploration on Webb is already planned, with research selected by a peer-review panel of about 200 scientists who ranked submissions on their scientific merit. Research topics include a closer look at regions with super massive black holes at the centers of galaxies that were first imaged by the Event Horizon Telescope.