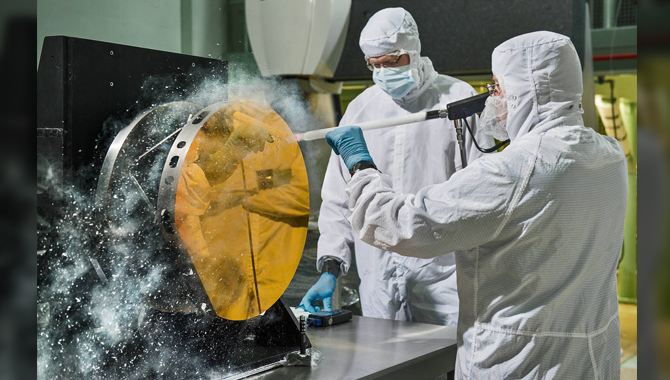 Engineers shoot carbon dioxide snow at a test version of a James Webb Space Telescope mirror to clean it without the risk of scratching it.

Less than two years away from liftoff, the James Webb Space Telescope (JWST) is undergoing critical tests to ensure it is ready to unlock secrets of the universe, past and present.

JWST is the most powerful space telescope ever built. Successor to the Hubble Space Telescope, JWST is twice as large and far exceeds Hubble’s capacity to penetrate the deepest mysteries of the universe. JWST will study objects in the visible and infrared spectrums to capture the dim light of extremely distant objects, while Hubble primarily views objects in the visible and ultraviolet spectrums. This ability to see in the infrared, combined with a much larger mirror to collect light, will allow JWST to look back 13.5 billion years at the faint light of the first galaxies and stars as they formed in the early universe. It will compare those formations with current structures in the universe so we can learn more about how they evolved.

“We would like to know, basically, how did we get here from the big bang?” said Dr. John Mather, JWST Senior Project Scientist as well as Senior Astrophysicist at Goddard Space Flight Center (GSFC), where the JWST development effort is managed. “We have lots of predictions, we have supercomputer simulations, we can even show you a movie how it might have happened. But we don’t know. You have to go look. Nature has this way of defeating our imagination, and so astronomy has always been an observational science. You just cannot depend on your imagination alone.”

JWST will be uniquely able to see through and into cosmic dust storms that obscure Hubble’s view to witness the birth of stars. Closer to home, it will observe everything in our solar system from Mars outward. The telescope will also help answer the question of whether we are alone in the universe by focusing on targets identified by observatories such as the Kepler Space Telescope, which have cataloged exoplanets that orbit stars other than our sun.

“This telescope is big enough to analyze the light that went through the planetary atmosphere and [identify] the chemicals in the atmosphere of another planet. Isn’t that spectacular? So we will be able to tell you a little bit about whether those little planets out there are like Earth,” said Mather. “We recently heard that there’s a planet around Proxima Centauri, which is the nearest star to us that we know of. We think we should be able to pick up some information from that planet—even that one, even though it’s a little tiny guy, about the size of Earth.”

With only two years to go until launch, JWST is embarking on a series of rigorous mechanical tests at GSFC designed to prove the telescope can survive the harsh launch environment. Before those tests began, the telescope was subjected to an initial optical measurement of the fully assembled primary mirror, which is 6.5 meters wide and combines 18 individual segments. Called the Center of Curvature test, this measurement will be repeated after the mechanical tests to ensure the measurements haven’t changed, indicating the mirror will be able to withstand the rigors of the actual launch in 2018.

“Our lessons learned from the Hubble were: If you really care about something, you’ve got to measure it at least twice. And if you don’t get the same answer, you better figure out why,” said Mather.

After the mechanical tests at GSFC, the telescope will be shipped to Johnson Space Center (JSC), where it will undergo testing in vacuum chamber A to confirm its ability to focus in space. This is critical, given the difficulties the Hubble faced after launch, which ultimately necessitated a shuttle mission so astronauts could apply corrective lenses to the telescope. Astronauts will not be able to do the same for JWST because it will be located far beyond low Earth orbit (LEO) at the Earth-Sun L2 Lagrange point, roughly a million miles from Earth. Minor adjustments can be made from the ground, as the mirror segments can be individually tuned.

After launch, it will take about six months for the spacecraft to complete its intricate deployment sequence and for science operations to begin. At that point, JWST and Hubble will both be operational but separated by about a million miles. This will give scientists multiple views of objects that fluctuate as well as a unique vantage point on shared targets.

“Just this week it was pointed out that Hubble and Webb can look at the same planets from different angles. That gives you a stereoscopic viewpoint that I hadn’t appreciated,” said Mather. “So you should be able to see a nice perspective on the planets. I think that’s really cool.”

When JWST finally launches, many will feel relief almost equal to their excitement. “This was a long time in coming,” said NASA Administrator Charlie Bolden, discussing the telescope at GSFC. “I’m not sure how many people understand the tremendous complexity of this particular observatory. Not only from a technical and scientific standpoint, but just from a management standpoint. It is an incredibly difficult project to manage.” Nonetheless, he added, “We’re on schedule and on cost.”

The mission is a result of intense collaboration between space agencies, industry, and academia. NASA has led the way at GSFC, while the European Space Agency (ESA) and Canadian Space Agency (CSA) contributed instruments. The main industry partner is Northrop Grumman in Redondo Beach, CA. The Baltimore-based Space Telescope Science Institute will operate JWST after launch.

“It has taken the support of NASA and the entire world 20 years to get here—and we’re almost done. People used to laugh at me and say, ‘That could never happen.’ And it’s happened,” said Mather.

JWST is scheduled to launch in October 2018 from French Guiana on an Ariane 5 rocket supplied by ESA.

Learn more about JWST in this video.

Watch the final installation of JWST’s primary mirror at GSFC.