Back to Top
Home/INSIGHT/NASA Project Flies into the Storm 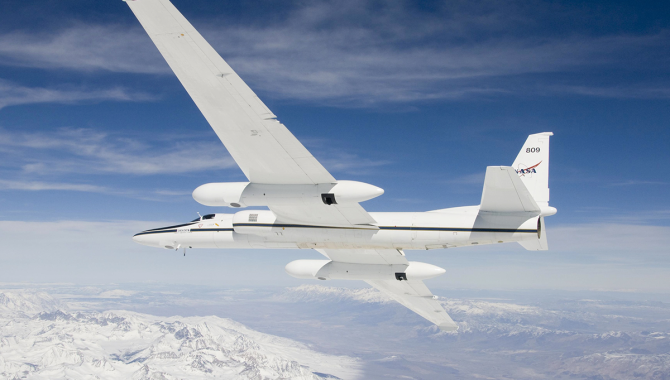 At the end of January, a rapidly intensifying nor’easter moved up the U.S. East Coast, dropping more than a foot of snow along a swath of coastal communities, from Ocean Pines, Maryland to Caribou, Maine. Stoughton, Mass., outside Boston, recorded 30.9 inches. About 5,000 flights were cancelled.

NASA’s ER-2 high altitude reconnaissance aircraft was not one of the cancellations. Initially delayed by unfavorable conditions, the high-performance plane flew during the storm at an altitude of 65,000 feet, where the sky is dark purple and 95 percent of the Earth’s atmosphere is below, in the pilot’s 240-mile vista. NASA’s P-3 Orion turboprop aircraft also flew during the storm. At altitudes between 22,000 feet and 7,000 feet, it passed through the turbulent heart of the storm again and again.

The flights were part of NASA’s IMPACTS project, the first major study of East Coast snowstorms in more than 30 years. IMPACTS is a five-year project that uses advanced radar, lidar, and microwave radiometer remote sensing technology to look inside snowstorms, examining how the microphysical processes that create snowflakes and the larger dynamics of the storm interact to sometimes create bands of much heavier snow, such as those that hit the Boston area on January 29.

“We’re trying to understand the mechanisms and the processes that create these bands and why some storms have them and other storms do not,” said Lynn McMurdie, a Research Associate Professor at the University of Washington, and Principal Investigator of IMPACTS, speaking at a NASA press conference. These processes occur on multiple scales. And it can be chaotic.

“There is a lot known about the processes that make snow, the different shapes [that] happen at a variety of temperatures and humidities,” McMurdie said. “Then what gets interesting is when we fly and we see a shape of a snowflake, [and] the temperature we have outside doesn’t match where this snowflake would normally have formed. It must have fallen from somewhere else, or something lofted it up there. Vertical motions are distributing the snowfall from where it formed to where we’re measuring it. There’s always puzzles.”

IMPACTS is an acronym for Investigation of Microphysics and Precipitation for Atlantic Coast-Threatening Snowstorms. The project gathers data from the storms with a wide range of resources, from the sophisticated instruments aboard the ER-2 and P-3, to radar trucks on the ground placed at key locations before the storm, to university students who walk into blankets of thick snow to release especially equipped weather balloons.

The decision to fly an IMPACTS mission is an unfolding process that begins five days in advance, when many of the storms have yet to form, and team members pore over high-resolution weather models in their daily briefings. The planes fly coordinated, precision routes that require advanced preparation. 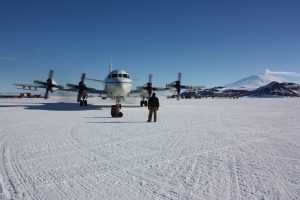 “We actually have to have a good idea 72 hours in advance that we might fly,” McMurdie said. “Then 48 hours in advance, we really start narrowing it down. …We look at every forecast model we get our hands on. It’s a very detailed, agonizing process.”

Greg “Coach” Nelson is one of the NASA research pilots who flies the ER-2, based for these missions at Pope Air Force Base in North Carolina. An hour before an IMPACTS flight, Nelson has completed the 20-minute process of putting on a pressure suit, similar to those that were worn by shuttle astronauts, and is breathing pure oxygen to reduce his risk of the Bends.

“They’ll strap me into the jet. I’m so encumbered by the pressure suit I can’t even strap myself in. The technicians do it all for you. You just put your hands up and you get strapped in,” Nelson said, speaking at the same NASA press conference. “…The best part of the whole mission is pushing that power up and blasting off the runway. It does blast off. It climbs, [initially], 10 to 15,000 feet a minute. We’re hitting 20,000 feet just 90 seconds after takeoff. And then it starts to slow down and climb like a normal airplane.”

About 40,000 feet below, a crew of six flies the P-3 on a carefully choreographed flight route to align with the ER-2. NASA pilot Rodney Turbak is a P-3 pilot who flies IMPACTS missions, which can extend to eight hours and carry as many as 18 scientists. Turbak said the P-3 carries similar instruments to the ER-2, “…but what we’re looking for is to try and get what’s actually in the cloud.”

“When we’re in there, we’re pretty much seeing a cloud of white, depending on whether we’re in a snow cloud, above it, [or] below it…,” Turbak said. The P-3 carries de-icing equipment, but conditions can become turbulent. During a January 29 flight, research notes compare the flight to a roller coaster ride. “I spent 26 years of my life trying to avoid what science wants us to go into today. It is good in the sense that most pilots and the airline industry is trying to avoid the stuff we’re flying.”

Meanwhile, on the ground, radar trucks monitor the storm from below and teams of university students—sometimes braving blizzard conditions—release large weather balloons equipped with dropsondes that directly measure pressure, temperature, and humidity as they rise into the tumultuous conditions.

The team is using this technology to gather data in unprecedented detail about what is happening inside a snowstorm, matching that with how that appears to weather satellites above, and on the ground below.

“…What we’re trying to address here is relationships from what is actually in the sky and what the radar reflectivity is,” McMurdie said. Matching radar reflectivity to actual conditions could lead to more accurate remote sensing of snowfall by satellites and more precise warnings about where and when heavy snow will fall during disruptive storms.