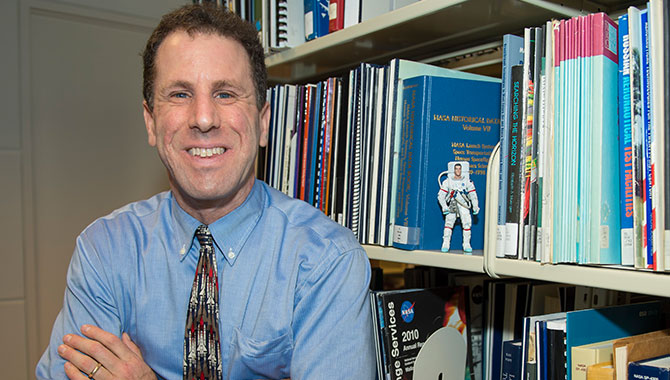 Stephen Garber is a Historian in the NASA History Division. Garber has worked in the U.S. Air Force’s Space Acquisition and Integration Office, Department of Defense’s Space Policy Office, the Congressional Research Service, and NASA’s Science Mission Directorate. He has a bachelor’s degree in politics from Brandeis University, a master’s in public and international affairs from the University of Pittsburgh, and a master’s in science and technology studies from Virginia Tech. He has done research and writing on topics such as orbital debris, NASA’s organizational culture, the design of the space shuttle, the Soviet Buran Space Shuttle, and an award-winning co-authored policy history of NASA’s Decadal Planning Team and President George W. Bush’s Vision for Space Exploration.

How would you characterize the importance of knowledge management from the perspective of a NASA Historian?

It’s essential to what historians do, just as history is essential to what everybody does in his or her daily life. When I give presentations about the role of the History Division, I make the case that everybody uses history whether or not it’s conscious. So it’s best if you can actively realize what you’re doing so that you can more fully utilize the knowledge that other people have accrued before you.

There are lots of quotes about this, such as, ‘Those who fail to learn from history are doomed to repeat it.’ Then there’s the pseudo-Mark Twain quote: ‘History doesn’t repeat itself, but it does rhyme.’ I also put a quote on my door from someone who made it up for his email signature block: ‘Everything is unprecedented if you don’t study history.’

At another level, I’m also a strong believer in the notion of ‘applied history,’ meaning that federal history should have direct utility for policymakers and other government employees. A history colleague from another federal agency has a number of excellent stories about how he made history germane for his agency’s leadership. For example, he took some of his agency’s leaders on a trip to the Antietam Civil War battlefield and expertly explained how one aspect of that bloody day was directly relevant to a high-profile issue that agency’s leaders had just faced. The historian explained things so clearly and the leaders were intelligent enough that the former didn’t need to be explicit about these lessons learned — the leaders quickly understood the point.

What are some practical ways the History Division contributes to overcoming knowledge gaps?

Over time we in the History Division get a lot of the same kinds of questions. For example, we seem to get lots of folks who are interested in the public relations aspects of Project Apollo. For a while I would get impatient and say to myself, ‘Oh, no. Not another question about the glory days of Apollo. I’m tired of that question. I’ve heard it a million times already. Let’s talk about something else.’

So I created a list of topics I would like to see people research or write about. Sometimes I pull it out when a student or other researcher wants to write about something new. Or sometimes people are looking for longer studies on something they’re curious about. Looking at those gaps in our knowledge is helpful, especially for somebody who’s not so familiar with the overall contours of NASA history. Looking at the gaps is one quick way to see what could be studied or — on the flip side — what has already been studied.

If you look at that list you see all sorts of subjects, and you get a sense of what could be learned from studying a particular topic. For example, a couple of years ago I added a topic of when to ‘fish or cut bait.’ That is, when is it time for a project manager to decide that a project has spent too much money, is too far behind schedule, and has missed too many technical milestones and thus should be cancelled? Alternatively, when is it appropriate to say, ‘We need more money and we need to re-baseline and get this done?’ How do you make those decisions? There’s probably project management or risk management literature on this subject, but I haven’t seen anybody cover this topic specifically for NASA history. So, I would be curious to see that, and I think that would be very relevant for a lot of managers right now. That’s just one example of a knowledge gap that could be filled.

Also, working in the History Division provides a broad perspective on what’s happened, both good and bad, in NASA and aerospace history. Often learning about what’s happened in the past in other subjects can be relevant to NASA history. NASA employees who are pigeon-holed in their technical work may not see such analogies or metaphors. On the other hand, one of the best parts of my job has been working with people across the agency with wide-ranging personal, professional, and educational backgrounds. When I listen carefully, I make mental connections that will help me do my job better, help other NASA employees learn about our agency’s past, and thus do their jobs better.

I’m very proud of the 200-odd books and monographs that our office has published over the years. Plus all the other efforts we do really contribute to people within and outside the agency learning about a whole host of history of science, history of technology, and history of management issues that relate to more than NASA itself. But these NASA stories can be case studies for other larger contexts.

What are some examples of tangible benefits of knowledge sharing?

When I worked at the Pentagon, my predecessor was discussing a subject portfolio he was preparing to hand over to me. When I asked him for electronic copies of some memos, he replied they were on the shared drive. My initial reaction was ‘OK, but where exactly?’ It turned out that the shared drive was so well organized that it was intuitive for me to find what I was looking for. DOD rotates people in and out of jobs frequently, so they have processes to preserve institutional knowledge outside of individual people’s heads. Unfortunately, this was the exception to the rule, but it shows that it is possible to share institutional knowledge effectively.

Another example is a graphic designer who used to lay out some of our books who came up with the idea of a ‘production kit’ to centralize knowledge about our processes for how a history manuscript becomes a published book. This ended up taking the form of a simple table where the columns are the kinds of people who work on a book (e.g., author, copy editor, and designer) and the rows are chronological steps in the production process. This has proved very helpful as a knowledge resource for frequently asked questions such as when does the author prepare the index, what constitutes a suitably high-res photo, etc.

As a third example, several years ago, an outside author proactively decided to compile a simple table showing how he handled the various changes that several peer reviewers requested to his manuscript. Our office insists that authors make all changes that peer reviewers request, with very limited exceptions. This was such a convenient way for me to see that he had taken seriously all the comments that I now ask other authors to compile similar comments disposition matrices for their manuscripts.

I’m a little concerned about the trend toward social media and short-form writing. As my father, a good and very experienced writer likes to point out, ironically, it’s generally harder and takes longer to write something that’s shorter than longer. Thus short-form writing is OK in and of itself, but I am concerned that social media condense people’s attention spans and are seen as a substitute for longer, more in-depth forms of learning.

I just read a fittingly concise book called History Disrupted: How Social Media and the World Wide Web Have Changed the Past. The author, Jason Steinhauer, articulately points out that traditional history and the interactive ‘Web 2.0’ have rather different attributes and goals, some of which conflict. For example, traditional history is ‘expert-centric’ while ‘e-history’ is ‘user-centric.’ Professional history is time-consuming, while social media are designed to provide instant gratification, largely because they are ‘data-driven commercial’ ventures. Similar arguments could be made about other forms of traditional versus Web 2.0 forms of knowledge management. This is cause for concern so we must adapt appropriately.

Perhaps the biggest misunderstanding I’ve seen is that it’s compartmentalized into a box. I view knowledge as more organic to other ways of operating. Going back to what I mentioned earlier about people often think about history only subconsciously. But if you can think more consciously and thus analytically about history, then what you know, what don’t you know, and what you’re unsure of become clearer. People tend to think of ‘lessons learned’ as compartmentalized (and sometimes even separate from history!), and I don’t really view it that way at all. What are you learning? Knowledge. So knowledge and learning should be integrated into what everybody’s doing. I like to think that you can learn something from practically any situation you’re in or any person you meet. Knowledge needs to be flexible and nimble.

This article has been revised. The original publish date was May 24, 2017.