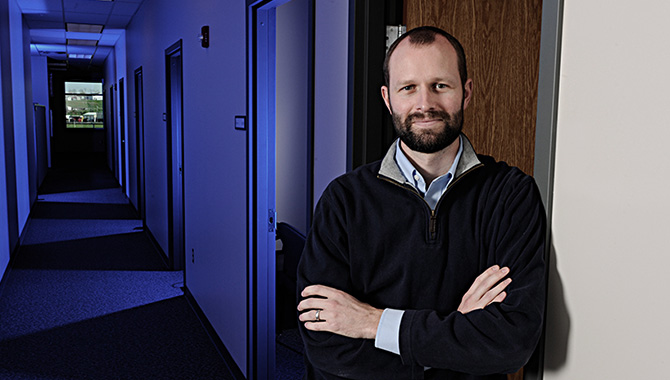 Northey has worked for the IV&V Program since 2003 and has performed IV&V analysis, led the Technical Quality and Excellence team, managed the IV&V software assurance tools lab, and led development of and updates to key IV&V Program technical assets. He has bachelor’s degrees in computer engineering and electrical engineering from West Virginia University.

IV&V has a reputation as a learning organization. Could you describe the culture of your organization?

I do think we have a strong culture. I think there are probably a lot of things we take for granted in terms of how positive the culture is and how much goes on that fosters knowledge sharing and learning. For several years we’ve had different forms of knowledge sharing forums that occur pretty regularly.

One is called “Tech Discussions.” Those occur almost every week on Wednesday mornings for 90 minutes. Some of the recent topics were static code analysis lessons learned, IV&V planning and scoping working group status, and an overview technical paper written in collaboration with some international partners. We’ve discussed an IV&V project risk methodology assessment, looking at results from a research effort that was conducted recently and another one on information assurance. So they’re technical topics, and people know that’s a way to communicate with the rest of our community to potentially get feedback on something that they tried, and maybe broaden understanding of new concepts that are being promoted within our programs.

There’s another one called “Monday Workshops” that tends to be less technical, and may include debriefs of conferences people have attended or status of collaborations with other agencies or other parts of NASA.

We have a lot of processes and infrastructure in place that promote learning and feedback. We have an ISO 9001 management system, and we also have a separate infrastructure for technical processes that we call a “Catalog of Methods.” All of the technical work performed by IV&V is based on methods that are housed in this catalog. And there’s a structure to that. Each method is associated with a common set of technical objectives and has a defined set of fields for capturing what you do and inputs and outputs. That’s been in place for about five years now.

We’ve also had some other forms of knowledge sharing over the years. We had annual two- or three-day workshops where people would come and give presentations, and we had external speakers that are involved in the verification and validation world come and share their challenges and experiences. We’ve always had one or more different concepts or forums in place for doing that type of knowledge sharing. People seem to be comfortable doing that, and it just became part of the culture.

You always have the priority and time management battles. People have a lot of stuff to do. But, generally speaking, there’s regular attendance at all of these events. There’s always some resistance to rolling out new things, and people are naturally going to question new things, especially in an organization where people think analytically. But as far as these concepts of knowledge sharing forums, it seems like people are pretty comfortable.

What approach do you recommend for knowledge services within an organization?

You want to view it as something that is a cultural thing. Ideally, you want to get to the point where you could step out of the picture completely and your organization would continue functioning as a learning organization as you envisioned. People are behaving in certain ways, following processes, sharing updates, and having pause-and-learns, knowledge sharing forums and discussions, and those types of things are happening almost naturally within your organization. So you want to look for bright spots where that’s already happening and recognize those individuals and encourage them to continue to do what they’re doing, because there’s a whole lot more power and opportunity across your organization than you’re going to have in your small KM group.

There are seemingly limitless possibilities for how you can approach knowledge management, and the challenge sometimes is picking a thing or two to focus on next and giving it a try, and then making a decision about whether or not you want to continue it. So I’d say pick some things and try them. Maybe try to find some early adopters who are willing to support you and people who are positioned in the right spots in the organization. Whatever you’re going to try to do, make it as easy as possible for the people on the other end. So if you’re going to do a facilitated discussion and ask people to come support it, you can tell them, ‘All you’ve got to do is show up for an hour. We’ll do all the legwork, we’ll facilitate, we’ll capture the notes, and we’ll provide recommendations. If you want to do something after that, OK, but all we’re asking you to do now is show up and let us pick your brain for an hour.’ That type of approach, I think, goes a long way toward people being willing to take time out of their busy schedules to do something new for you.

What are some ways to ensure that the workforce here at NASA is learning from across the agency?

Within our program we established a knowledge strategy in accordance with the agency’s NASA Policy Directive on knowledge (NPD 7120.6). And it’s basically this super simple model that describes how we want people and groups within our organization to behave.

The second component is people actively share knowledge. They’re going to people who they think might be interested in having a conversation. Maybe they’re presenting at one of these forums that I talked about. Maybe they’re writing to someone. Maybe they’re submitting requests for process updates. However they do it, they’re actively trying to share.

And then the third piece, which is really where I think the rubber meets the road, is people apply the knowledge. Without this piece I think everything else we do is irrelevant or useless. In other words, if people go and attend that 90-minute Tech Discussion and they really like what they hear — it sounds great, they connect and it makes sense — but they leave the session and never do anything with it, then you haven’t gotten any value out of it. So we try to understand within our community what actually makes people apply what they learn and focus our efforts on knowledge management techniques, activities and approaches that are going to lend themselves to people applying what they’ve learned.

I think you want to try to provide people with opportunities and make it easy for them in order to increase the likelihood they are actually going to apply what they’ve learned. If people go and search a lessons learned database and either can’t find what they’re looking for or it looks like there’s nothing relevant, they’re probably not going to spend their time doing it again unless they’re forced to by process. But anything that actually connects with people and makes it easy for them to apply what they learn works to our benefit. That’s way easier said than done. And even understanding what makes a difference in an organization as small as ours is a challenge, but I do think it’s a key piece of the challenge.

One might be that people don’t recognize just how much value they already place in knowledge. There’s a gentleman named Larry Prusak. He’s a knowledge management guru who’s been a consultant to NASA for a while. He attended at least two or three of the NASA CKO Knowledge 2020 conferences that I’ve been to, and he once commented that organizations spend 70 to 80 percent of their money on knowledge.

NASA falls into that category. And at first blush, that sounds crazy high. But his claim is that when you pay a senior guy twice as much as a junior guy, you are paying for that senior guy’s knowledge. There’s no other way to explain why you’re paying him twice as much. And when you look at it that way, you start to see that you’re making huge investments in knowledge all the time. And I think that type of argument or that line of thinking can really justify increased focus on knowledge management, maximizing the value you get from all that knowledge you build up over time, and maximizing the transfer and the efficiency of the transfer, and all those things that can be lumped under the knowledge management umbrella.

Within NASA, we have great support for focusing on knowledge management and applying resources to it. But there are probably some organizations where they don’t get that same support and that might be one of the reasons people don’t realize how much they already value and pay for knowledge.

Are you observing any trends or cultural shifts that affect knowledge management going forward?

Within our program there’s definitely been a lot of momentum with a wiki application over the past three or four years. We have a commercial off-the-shelf application called Confluence, and there are a number of other ones that are available. People just seem to be comfortable creating new pages and posting content and using it for all kinds of information sharing. So that’s one that’s been interesting and that we’ve tried to encourage and leverage in a few different ways.

It certainly seems that there’s a lot of technological solutions that people use in their personal lives that don’t get the same momentum in the workplace. I don’t know if it’s generational differences or a comfort level, but that’s been kind of interesting to observe. We face collaboration challenges within the workplace that seem to have good partial solutions available to the world and, for whatever reason, we can’t quite take advantage of them. Social media is part of it and there are other types of collaboration tools that groups use now. There’s talk about email replacement and better ways to collaborate than email, and ways to make that collaboration more accessible to larger groups and across teams and organizations. People talk about those solutions and they seem to like them. I don’t know if they’re not accessible or if they just don’t get momentum. But whatever the deal is, we have a harder time latching on to those and taking advantage of them in the workplace.