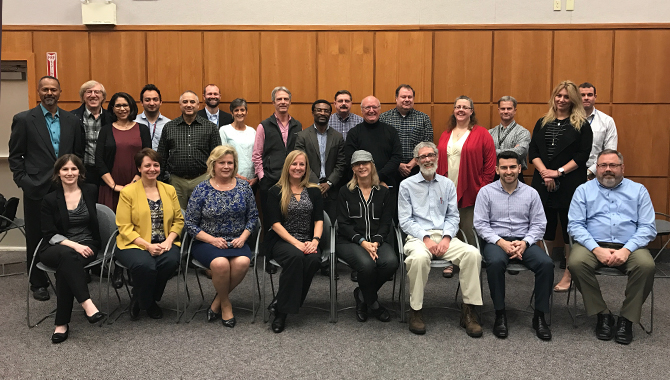 The community gathers in accordance with NASA Policy Directive 7120.6 and at the recommendation of the Aerospace Safety Advisory Panel (ASAP) in order to share leading practices, deepen understanding of lessons learned and how they impact mission successes and failures, learn from industry partners, and work on agency-wide problem-solving, such as developing the agency knowledge strategy. The KSC meeting agenda was designed to meet these objectives. Meeting highlights include:

Rogers provided an informative overview to the knowledge community on the different types of cases used to teach NASA project and program practitioners critical thinking skills and learn from mission successes and failures with lessons on leadership, operational, communication, motivation, organizational silence, and cultural diversity, to name a few.  He provided that cases can best highlight the kinds of decisions and actions taken that have made a mission highly successful, like the Mars Rovers, and those that end in disaster like NASA’s Columbia Shuttle . He spoke of the value of using case studies as a learning and knowledge sharing tool, and how a lecture differs from an interactive case discussion. Rogers demonstrated the various types of cases used to facilitate technical and soft skills development. Jennifer Stevens, Marshall Space Flight Center (MSFC) Chief Knowledge Integrator, and David Oberhettinger, Jet Propulsion Lab (JPL) CKO, spoke to the group about their respective journeys of starting up the case method at their centers with Rogers’ guidance. They each reviewed the lessons learned in working with writers and in facilitating cases.

A key take-away for the participants was that working with writers on case study development requires a very different set of skills than facilitating a case-study learning session.  The former involves coaching writers to tell the story of what happened through personal experience and interviews with other people who were involved in the story, but not lead the reader to a conclusion; they are just documenting what happened or didn’t happen in the case.  The written case should help the reader think critically about the scenario and make their own conclusions. It also has to build up to the key actions and decisions in the scenario, but it also has to close down to a succinct ending.  The facilitator of a case study learning session leads a discussion about the case and asks questions which compel participants to converse and think through the case facts, and to discuss the pros and cons of the choices and decisions made with ultimately impacted the outcomes, whether they be project success or failure.  Both the skill of coaching writers and facilitating cases can be learned, and Roger’s is well-known for his ability to teach others those skills.

Other resources for case studies:

The NASA knowledge community has held discussions about metrics and standards, specifically what baseline metrics exist and what methodologies to consider when developing their own standards. They have looked at the American Society of Quality and Productivity’s (APQC) “Levels of Knowledge Management Maturity” as one way of accessing and measuring the impact and growth of their efforts, and this will provide additional information to help inform the community’s methodology in the future.

The next face-to-face is being planned for July 2017.