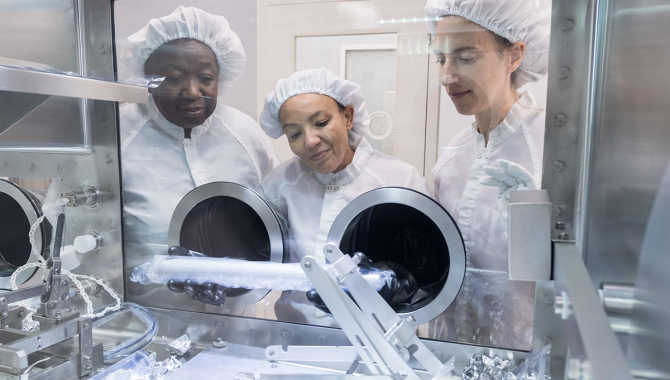 Researchers are examining lunar soil and rocks with new tools.

In the Moon’s Taurus–Littrow Valley, a field of large boulders stretches along the base of a 7,500 ft tall mountain known as South Mastiff. On December 12, 1972, after waking to Wagner’s Ride of the Valkyries, and repairing the Lunar Roving Vehicle (LRV) by fashioning a new fender extension from folded maps taped together, Eugene A. Cernan and Dr. Harrison H. “Jack” Schmitt stopped near this bounder field on the second extravehicular activity (EVA) of Apollo 17.

The astronauts collected sample 72320 in an area shadowed by the overhang of a 6 ft diameter boulder. The next day, the astronauts collected a similar sample, 76240, also in the permanent shadow of a boulder. These samples were among several from Apollo 17 that were initially processed at room temperature at Johnson Space Center before being placed into a freezer within one month of their arrival on Earth and stored at -20 ° Celsius for 49 years. 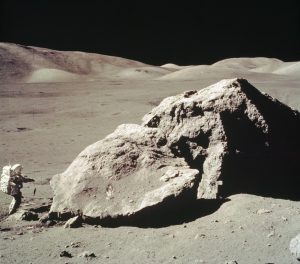 In 2018, NASA issued a research announcement under the Apollo Next Generation Sample Analysis Program, offering some of these pristine frozen samples for research, as well as samples still sealed in special containers designed to maintain the vacuum conditions of the lunar surface, and samples collected during Apollo 15 that have been stored in helium since shortly after their arrival on Earth.

“It was anticipated early on in the Apollo Program that analytical technology would mature, would become much more sophisticated with time. That we could gain new information from the same old samples. It makes it very, very exciting for everybody. In fact, Apollo never ended for lunar scientists,” said Schmitt, speaking in a NASA video. Schmitt, who holds a Ph.D. in geology, is the only scientist to have walked on the Moon.

Earlier this year, Johnson Space Center shipped frozen Apollo samples to Goddard Space Flight Center (GSFC) in a box that included chilled panels and dry ice to maintain the materials in a frozen state. The samples were then transferred to a freezer at Goddard, where researchers are examining them.

“In the near future we’re going back to the Moon and hopefully going to the polar regions of the Moon where some [areas] are in permanent shadow and … don’t see the Sun. They’re cold. These particular samples are really great analogs for what we might expect to see in the polar regions, when we go back,” explained Dr. Natalie Curran, a lunar geologist, speaking in a NASA video. 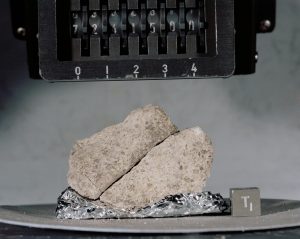 A close-up view of Apollo 17 lunar sample number 72415,0 which was brought back from the Taurus-Littrow landing site.
Credit: NASA

A team led by Barbara Cohen, a planetary scientist at GSFC, will examine sample particles with an electron microscope and an electron microprobe to determine their composition, petrology and mineralogy, and “will then extract a subset of particles of interest, … and use noble-gas mass spectrometry to measure cosmogenic noble-gas isotopes,” according to an outline of selected proposals.

Another team at Goddard, led by Dr. Jamie Elsila-Cook, an astrochemist, is studying the levels of amino acids and the volatile organic compound classes that could be precursors to amino acids in pristine lunar samples, comparing those levels with levels in samples stored conventionally to measure the effect that freezing or vacuum storage has on the preservation of organic compounds in lunar samples.

To do this, the pristine samples are placed in a glass tube with water and sealed with a torch. The tube is then placed in an oven, where it boils overnight, Elsila-Cook said, in a NASA video. The team calls this “Moon Tea,” and the process is effective at pulling the soluble compounds out of the lunar sample. The research will provide a better understanding of the volatile organic compounds on the lunar surface, their origin, and their abundance.

“It’s really special to be part of this, and particularly because I can look back at the papers and the processes that the curation office and the scientists in the 1970s thought about,” Elsila-Cook said. “…They put so much care into preserving these samples for future science, to making sure that they were going to be at the best conditions so that, as we developed new techniques, we’re able to go and look at these samples and get new answers to the science questions that were being asked.”

Making the Apollo samples available for study now not only enables researchers to examine them using advanced technology, providing new insights into the lunar surface, but it also could provide important information for future Artemis missions working to establish a long-term human presence at the Moon. One of the early challenges will be finding water ice near the Moon’s south pole and determining how best to employ it as a resource.

“There’s a whole industry of engineers who are studying how to extract resources from the Moon, and so one of the things we want to do during Artemis is actually test out some of these new technologies and see how effective they are at extracting water and these other materials,” said Dr. Julie Mitchell, Artemis Sample Curation Lead, in a NASA video. “Thinking forward to Mars, we’ve only ever sent robotic missions to Mars. And so, when we send people to Mars, these are things we’re going to have to consider.”