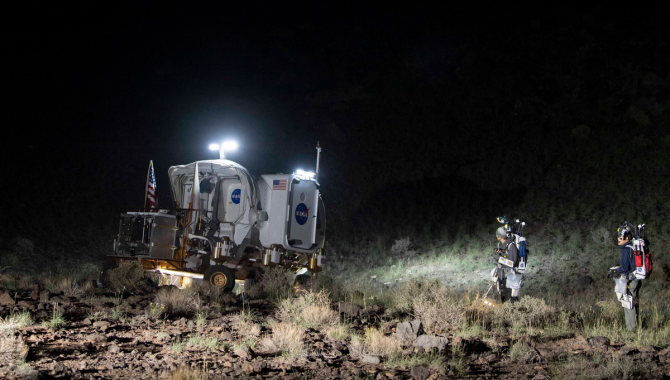 NASA teams returned to the Black Point Lava Flow, north of Flagstaff, Arizona in October, using the unusual terrain there to simulate conditions at the south pole of the Moon.
Credit: NASA 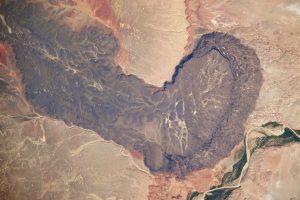 The Black Point Lava Flow, north of Flagstaff, Arizona, stretches approximately two miles wide, a thick trail of black basaltic lava that flowed east for miles before pooling at edge of the Little Colorado River and forming a thick ridge. The rolling hills of the area are either bare or covered in patchy desert grass. Large black boulders mark a landscape that is frequently described as “otherworldly.”

During the Apollo era, NASA came to the area north of Flagstaff regularly, as well as other sites in Arizona and the U.S. southwest, using the distinct terrain as an analog for the lunar surface. NASA tested rover concept vehicles and exploration technology there, and trained astronauts about the geologic features they should look for while collecting samples on the Moon. In 1967, the United States Geological Survey detonated explosives to create 96 craters at Cinder Lake to help NASA better prepare astronauts for lunar craters and ejecta.

Beginning in the late 1990s, NASA returned to the area for the Desert Research and Technology Studies (D-RATS) program. Running through 2012, teams of NASA scientists and engineers collaborated with industry and academic partners to test and validate experimental hardware and software for human space exploration, and to develop and refine operational techniques for missions. D-RATS tested spacesuits, rovers, wireless networks, electric tractors, robots, and more.

In October of this year, NASA rebooted D-RATS, returning to the Black Point Lava Flow for the latest in a series of analog missions to prepare Artemis astronauts to explore new terrain on the Moon. The Moon’s south pole is both an intriguing location to explore and a challenging one. Deep craters there contain significant amounts of water ice, frozen at temperatures as cold as -414 degrees Fahrenheit. The Sun remains close to the horizon there, casting long shadows over the landscape. At the same time, some peaks in the region are in bright sunlight for more than 200 Earth days a year. 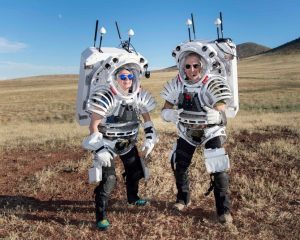 These analog missions spanned nearly three weeks and began with six days in early October near S P Crater, a strikingly symmetrical cinder cone volcano that rises 820 feet above the surrounding desert. The site is about 25 miles north of Flagstaff. The training then shifted to Black Point Lava Flow for 12 days.

These analog missions are designed to test operations concepts and hardware that could be used later, on the lunar surface. This enables NASA to learn lessons earlier in the development process, saving costs later. NASA astronauts Drew Feustel and Zena Cardman conducted a series of simulated moonwalks, covering a one-mile area. They wore an assortment of gear to approximate the feel of a moonwalk, including the frames of Artemis spacesuits, the lighting systems from Artemis helmets, and the technologically advanced backpacks that will contain their portable life support systems on the Moon. 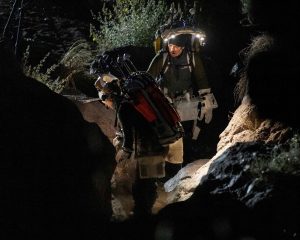 During the simulated moonwalks, the astronauts practiced the techniques to collect samples from the Moon’s south pole using rakes, hammers, and coring tools. They were guided by an actual flight control team from NASA’s Johnson Space Center and were also observed by experts.

With JETT3 complete, NASA was joined by the Japanese Space Agency (JAXA) at Black Point Lava Flow for the latest in a series of practice operations in an effort known as Desert Research and Technology Studies (D-RATS). From October 11 through October 22, D-RATS focused on practice sessions with the prototype of a large, multi-wheeled, pressurized lunar rover. NASA envisions that such a rover can eventually play a key role in establishing a long-term human presence at the Moon during the Artemis program.

In 2008, NASA began testing a prototype known as the Small Pressurized Rover (SPR). The SPR features a chassis with six pairs of pivoting wheels for maneuverability, a pressurized cabin in which two astronauts can live and work, and spacesuits affixed to the outside of a crew lock at the back of the rover. Astronauts can enter and exit the spacesuits through special ports without ever bringing the suits inside the rover. This reduces dust inside the rover, wear and tear to the spacesuits, and significantly decreases the preparation time for an EVA.

A pressurized lunar rover would permit two astronauts to live and work remotely from a lunar lander or Moon base, carrying supplies they need for weeks. Operating with a pair of rovers would create redundancy, with a single rover capable of carrying four astronauts to safety. 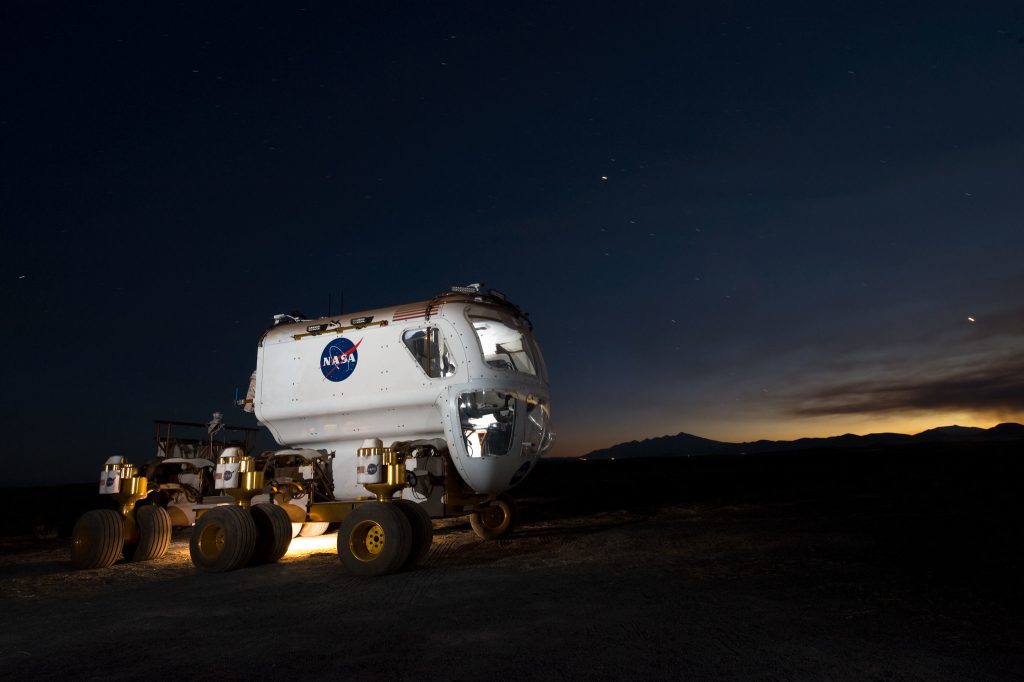 In 2008, astronaut Mike Gernhardt and geologist Brent Garry with the Smithsonian Institution spent three days inside this rover, going through the motions of a real three-day geological sortie on the moon.
Credit: NASA

JAXA is working with Toyota under a joint research agreement to develop a pressurized rover for human exploration of the Moon. The team envisions the rover will be powered by fuel cell electric vehicle (FCEV) technology. Early work has focused on powertrain performance and the development of prototype tires.

Through the Artemis missions NASA intends to establish a long-term human presence at the Moon, exploring areas far beyond the clustered Apollo landing sites in the equatorial region, utilizing the water ice at the lunar poles as a resource. The lessons NASA learns during these extended missions will inform an eventual human mission to Mars.