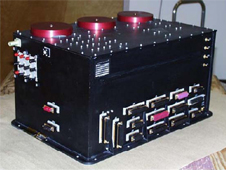 In the summer of 2003, NASA Program Manager Rex Geveden was eager to ship the Gravity Probe B (GP-B) spacecraft to Vandenberg Air Force Base for integration and testing and then launch. In April the program had undergone a termination review, which in Geveden’s estimation, had been a close call. Getting the spacecraft to the launch pad would remove the threat of imminent cancellation.

GP-B was no stranger to the threat of cancellation. By this point, it was in the home stretch of its development after earning the distinction of being NASA’s longest-running project in the agency’s history. Its scientific experiment was originally conceived in 1959, just a year after NASA’s founding, and it first received funding from the agency in 1964. During its nearly 40-year history, the program had faced cancellation numerous times.

GP-B arrived at Vandenberg in July. As NASA and its contractor teams from Stanford University and Lockheed Martin checked out the spacecraft and its systems in preparation for the Flight Readiness Review, engineers turned their attention to a problem with the Experimental Control Unit (ECU), a box on the spacecraft that housed a number of electronic components. The ECU, which had been slated for testing months before, created significant signal interference (“noise”) in the Superconducting Quantum Interference Device (SQUID), the highly sensitive magnetic field detector that would provide measurements critical for the mission’s science objectives.

Once engineers discovered that the interference originated in the ECU, they constructed a massive fault tree to determine the possible causes of the problem. The team agreed that it was a grounding issue, and that the ECU power supply was the likely culprit.

Fixing the ECU would not prove easy. The resolution of this very specific technical problem would ultimately require a significant management decision involving all the key organizations with responsibility for the development of GP-B.