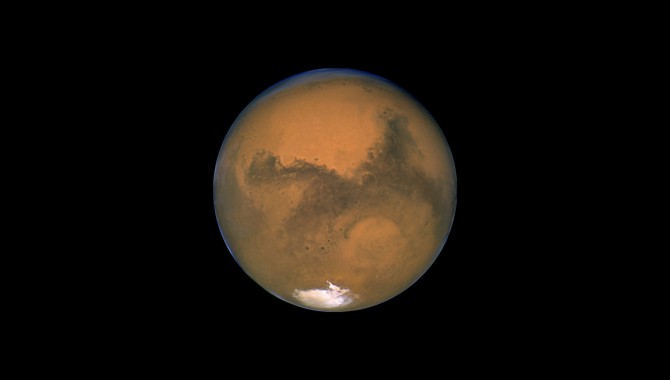 On the 4th of July 1997, I lay on a blanket with my family at a fireworks display near our home in Los Angeles, California. The pyrotechnics, they tell me, were dazzling. I wouldn’t know. My attention was fixed on a tiny orange dot in the sky — Mars.

A month earlier, NASA had released an Announcement of Opportunity for a supplementary payload on the Mars Surveyor Lander mission scheduled for launch in 2001. The Human Exploration and Development of Space (HEDS) organization had been authorized to make the most preliminary of investigations into the feasibility of sending humans to Mars. Among the requested investigations was an opportunity to study the dust and soil of the Red Planet, emphasizing possible hazards to human explorers. I spent that summer of ’97 working on a proposal for the project I would eventually lead, the Mars Environmental Compatibility Assessment (MECA). MECA was selected in February of ’98. We promised to deliver four new instruments by April 2000 with a modest budget of $5M. I suppose we were too inexperienced to know any better. 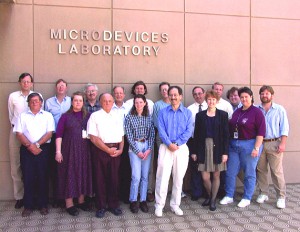 The MECA team pictured here at their home base, NASA’s Jet Propulsion Laboratory in Pasadena, California.

Assembling the Team
This is a story about some of the people who created MECA. Like the Superbowl champion New England Patriots, the MECA team was built from castoffs, organizational misfits, and a few superstars that had been overlooked in the draft.

The 5-7 core members were mostly “technologists,” the nomenclature we use at the NASA Jet Propulsion Laboratory (JPL) for R&D scientists in non-space disciplines. We were generalists, not specialized engineers, and we had little or no flight experience. We were creative, but not very good at following instructions. But this was a good time for innovators and problem solvers. JPL was rolling out “faster-better-cheaper” projects, replacing one-a-decade mega-missions with a flotilla of micro-missions, and implementing our own brand of corporate re-engineering.

We took the most motivated people we could find and built an organizational chart around them.

Veterans of the great observatories, of Cassini, Galileo, and Magellan, were in many ways no better prepared than we were for this new way of doing business. We took the most motivated people we could find and built an organizational chart around them. I pushed people out of their professional comfort zones, encouraging them to grow in other areas. As the technology expert, I presented budgets and schedules at our reviews, while the schedule and budget expert reported on technical progress. I aimed to have at least two people capable of doing every job.

I secured a large room adjacent to a laboratory, setting up desks along the walls and a small conference table in the middle. No walls, no dividers. I didn’t force people to give up their offices, but I did move everybody’s computer to his or her new desk. It was remarkable how fast they followed! We were constantly together, each of us listening with half an ear to every meeting, conversation, and phone call. There was no such thing as privacy, but we were enormously efficient. We didn’t need staff meetings to know what was going on, and few potential mistakes or opportunities went unnoticed. We spent two years in close company and developed an intimacy that got us through hard times.

While many engineers can competently design and build instruments, I felt that our unique challenge was to find the 100 gremlins waiting to trip us up. Finding a mistake was a good thing, it meant one less gremlin to worry about. And notwithstanding JPL’s institutional fervor for process-based management and thorough review, that last gremlin can only be found by a particularly dedicated individual waking up in alarm in the middle of the night. My job as Project Manger was to cultivate that attitude of ownership.

You Gotta Have Heart (and Soccer )
I thought I knew all about Mitch Shellman until his funeral. That’s when I learned about the fellow who, late in the Vietnam War, dropped out of the Green Berets and joined the medics because that was the only available avenue to the front lines. About the veteran who clawed his way up from custodian to contract negotiator. About the quotes from Mother Teresa peppering his logbooks. About his passionate commitment to youth soccer.

Mitch never doubted that, despite his lack of technical education, he would someday be a Project Manager. I signed him on because he was willing to do whatever it took, and because he had somehow learned an enormous amount about building and managing flight instruments. To the institution, he was a contract negotiator from procurement. To me, he was Instrument Manager, Deputy Project Manager, and friend. Tenacious and tireless, he turned on the lights in the morning and was the last to leave at night. It took us a year of argument with management about his credentials before he was transferred to a technical division. A week later, the day after Christmas, he died of a heart attack in his driveway. The toughest thing I ever had to do as a Project Manager was to come in on January 2 and say to the rest of the team, “Let’s get back to work.”

The Wit and Wisdom of Tom Meloy
Twenty years ago a doctor gave Tom Meloy six months to live. That doctor is no longer with us but Tom, well into his eighth decade, shows no sign of slowing down. An expert in the physics of particles (the gritty variety, not the subatomic ones), Tom had last worked for NASA in the Apollo era and was now comfortably ensconced in an endowed chair at West Virginia University. When I asked him to be the MECA Principal Investigator (PI), Tom’s response was “You don’t want me, I’m an emotional cripple.” His wife of 50 years had died 3 months before. But I convinced him of the therapeutic value of the new challenge, and neither of us ever regretted it.

Unlike other PIs, Tom was not the project architect, the autocratic decision-maker, or even the scientific guru of MECA. He was, quite simply, our mentor and our inspiration. No person or task was of lesser importance to him than any other. Every visit to JPL began with his asking me “whom should I take to dinner?” And whoever it was, sponsor or secretary, technician or engineer, would come in the next day with renewed motivation and appreciation of their role in our unusual project.

I made a point to find contractors who were big enough to do the job but small enough to care about us.

Tom never forgot that, to the rest of the world, ours was the most extraordinary of opportunities. At our first meeting he reminded us that we had “an opportunity to place a tile in the corridor of history.” He coached me on how to manage when your project is “long on prestige but short on cash.” He taught me that, on a small team, everybody needs someone who can step into their shoes at a moment’s notice. He taught me to be parsimonious with the written word, to banish adjectives, to never say “very,” and to avoid starting sentences with “the.” Tom always said, “Managing is parenting.” He was, I’m sure, one hell of a parent.

Keeping the Deal
My first presentation as a project manager featured a slide that said, “Keep the Deal.” By this I meant not just the deal with our sponsors, but with our team, our contractors, our management, and ultimately with the American people.

MECA depended on subcontractors to make several of our instruments. I made a point to find contractors who were big enough to do the job but small enough to care about us. It was my objective to treat these contractors much the same as we treat our in-house technical organizations, and vice versa. I tried to react even-handedly to overruns, schedule slips, and product failures, and to be equally willing to help them out when they were in trouble. I encouraged them to tell me about problems, concerns, and innovative ideas. I remembered to ask the contractors regularly how they were making out — were they making money or losing money on the contract? I tried to find other ways to help them out, by writing articles for their trade journals or helping them with proposals. As a rule, the MECA contractors outperformed their in-house counterparts, and we formed personal relationships that have outlasted the project.

Part of the deal was encouraging our team members to enjoy their lives outside of the Laboratory. I encouraged people to make working late the exception, not the rule, and to take their two weeks of vacation every year. A Project Manager who can’t accommodate the 4% schedule margin those vacations represent just hasn’t planned very well.

I made a point to set a personal example, not to try to prove that I could work longer hours than anyone else. I made sure that nobody was so indispensable that we couldn’t do without him or her. At JPL’s suggestion, we declared (and enforced) “meeting-free” weeks during prime vacation time. We remembered to knock off early for the occasional beer, to go off for lunch, or to turn a long discussion into a walk in the woods.

Did it work? Only partially. MECA was under-funded and over-ambitious, and people will do what’s necessary. Two team members filled up their “non-working” time with grueling degree programs. But five babies were born into our small project, so folks must have spent some time at home!

Loss and Legacy
Lynne Cooper, who rescued us in mid-project by replacing Mitch Shellman, taught me about legacy. Legacy is not, as I had imagined, just about hardware and software delivered and documented. It is equally about skills learned, methods evaluated, students inspired, and people trained and educated.

Nearly three years of our lives felt swept away when our mission was scrubbed after the loss of Mars Polar Lander. My grief for the loss of MECA, in a smaller way, lives in the same place as my grief for the loss of my friend Mitch. Thinking of either can bring a momentary, crushing sense of weariness. It can also bring an upwelling of pride. This isn’t, after all, a story about a failure. We kept our deal and left our legacy.

Question What does it take for an entire organization to ‘keep the deal’?

Dr. Michael Hecht is project manager and a co-investigator for the Mars Environmental Compatibility Assessment (MECA). He has been with NASA since 1982 at the Jet Propulsion Laboratory. In his previous assignment with NASA’s New Millennium Program, he was instrumental in defining the “microlander” that was adopted as NASA’s New Millennium Program Deep Space 2. Dr. Hecht is a member of the ASK Review Board.