Back to Top
Home/17/ASK Magazine/Checkmate to Uncertainty
Dr. Alexander Laufer

Coping with project uncertainty requires, at times, surprising solutions. I recall a story related to me by a project manager that illustrates just such a solution.

The project manager was overseeing the construction of a new complex of swimming pools for a university, when the school’s athletic director asked him to also remodel the basketball arena. He’d never done a remodeling project before, and this particular project was extensive. The entire arena needed an overhaul. He’d established a good relationship with the athletic director, and since his project was winding down, he agreed to tackle the remodeling job.

One consideration in his planning was that the basketball stadium was used by many of the school’s sports groups, so there was only a small window of opportunity to complete the job — the last three weeks of summer vacation. This timeline was nonnegotiable.

His first draft of the project schedule required a one-month timeline to complete the remodel as proposed. Working with the athletic director, he reduced the scope of the project and drafted a schedule with several contractors working in parallel where possible. The three-week timeline could be met.

He presented the initial plan to the school’s administration for approval. The plan had the last day free for any emergency that might arise (see Figure 1 below). The administrators, based on their experience with previous remodeling jobs, asked for a revised plan with two days at the end for emergencies. What he gave them instead was a plan with no free days at the end.

Why? After meeting with potential contractors, he found that it was impossible to accurately estimate the time needed for some of the remodeling tasks until the work had actually started. If one contractor exceeded the estimated time, for example, that would delay the start of the next contractor’s work. The contractor who followed the first would not sit idle; instead he would move to another job, further delaying his start time and rendering the entire schedule useless.

Prior to developing a schedule, he established two criteria to reduce uncertainty. First, he reached an agreement with the athletic director that there would be no changes to the project. Second, he would select his contractors on the basis of proven reliability, not just cost.

The schedule had to absorb changes as work progressed without collapsing. He did this by inserting time buffers — a half- or full-day between tasks — to follow tasks that were on or close to the critical path and had a high probability of time overrun. These would allow him to absorb schedule changes without stressing the overall timeline. A bar chart depicting the project schedule would look like a checkerboard, with black squares representing planned tasks and white squares representing the time buffers (see Figure 2 below).

The result was excellent. While he did use some of the time buffers, he never had to change the scheduled start time of any of the contractors. This convinced the administration to adopt a “checkerboard” system for all future remodeling projects.

The story I heard from this project manager demonstrates what I have seen time and again: Successful project managers create project schedules that can easily checkmate uncertainty by loosening the connections between uncertain tasks. 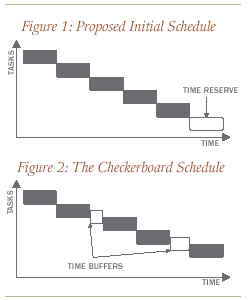