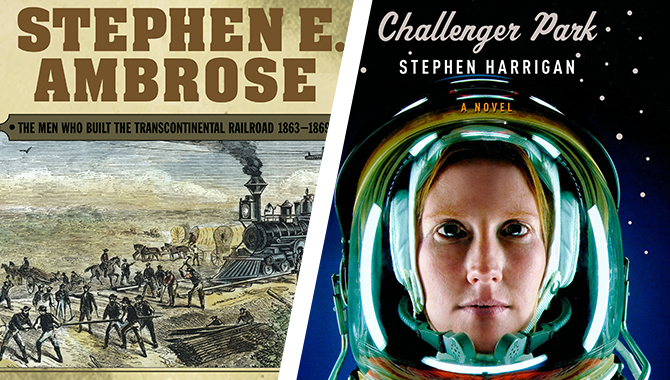 Here are descriptions of two books, very different from one another, that we believe will interest ASK readers.

Nothing Like It in the World: The Men Who Built the Transcontinental Railroad 1863 – 1869

Long before Apollo 11 flew to the moon, ambitious engineering projects tested the technical and managerial skills of the organizations that undertook them. Stephen Ambrose tells the story of one of them: the building of the transcontinental railroad nearly 150 years ago. His book describes how the massive project was tackled at a time when nearly everything was done by muscle power. He captures the difficulty of laying nearly two thousand miles of track across land that includes great stretches of desert, three mountain ranges, and vast areas without trees for ties or bridges.

He describes in detail the interactions between engineers and their bosses at the two companies competing to build as much of the railroad as possible. The Central Pacific and the Union Pacific companies had to contend with different problems and circumstances. Central Pacific built the railroad from Sacramento over the Sierra Nevada to the east. The mountains presented particular problems to the engineers and workers; they had to find solutions for tunneling through rock, dealing with deep mountain snow, and choosing the most efficient route. The Union Pacific’s starting point was Omaha, Nebraska. Building west from there, they were challenged by barren lands, hostile American Indians, and the extreme weather changes of the Great Plains. The logistics of providing building materials, water, and food caused problems for both companies, as did obtaining enough laborers. Building in unsettled lands required the use of local resources to keep the construction going at a quick rate. Sometimes quality was sacrificed for speed, as when Union Pacific decided to use less durable cotton wood trees to make ties.

Ambrose gives readers a vivid peek into a day in the life of a railroad worker. He describes the backbreaking work and details the rations workers ate and how long they were allowed to rest. The railroad companies pushed their workers hard to win the race. They even built great bonfires out of brush so the work could continue at night. These descriptions reveal the incredible achievement — and human cost — of building the transcontinental railroad.

Building the transcontinental railroad involved challenges and uncertainties that characterize any large-scale project. Managers had to keep their laborers content and the company owners satisfied with the rate of progress. Like NASA project managers, they had to deal creatively with unforeseen problems, while remaining in good communication with superiors and subordinates.

This book takes up some familiar novelistic themes: a rocky marriage, adultery, forgiveness, and the stresses of caring for children when both parents have demanding jobs. In Challenger Park, though, the parents are astronauts. The novel deals mainly with Lucy Kincheloe’s training at Johnson Space Center and her troubled shuttle mission, as well as with her troubled personal life.

The marital drama is reasonably well crafted, but Challenger Park is no Anna Karenina. What makes the book worth reading is Harrigan’s evocation of the experience of space flight. Basing his descriptions on interviews and accounts given by real astronauts, he creates a vivid sense of what weightlessness feels like, of the subtle smell of space that clings to a space suit after extravehicular activity, and of the crew members’ exhilaration and tension. For readers who work in the space program but will never leave the earth themselves, the novel offers a vicarious ride on the shuttle and visit to the International Space Station.