Let me tell you a story.

When I was a young, eager PhD student at Massachusetts Institute of Technology (MIT) searching for a thesis topic, I would take long, late-afternoon walks around the Institute, hoping to stumble upon inspiration in the paint-scabbed hallways. Inevitably I ended up in Building 4, the domain of the music department. The pianists would be practicing, usually something difficult and melancholy, and music would trickle from the instruction rooms and fill the corridor. For a moment, my unwritten thesis would be forgotten, and I would remember that there were, in fact, other things in the world besides simplex algorithms and Bode plots and Kalman filters. (These random musical interludes were, I’m sorry to say, some of my most pleasurable moments as a graduate student.) 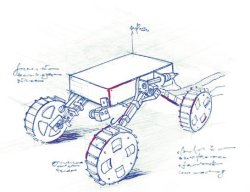 I eventually found a thesis topic in the field of robotics. Specifically, I investigated autonomous control algorithms for planetary surface exploration rovers. (Full disclosure: my research was sponsored by the wonderful folks at NASA’s Jet Propulsion Laboratory.) To complement my major field of study in robotics, I chose as a minor field a subject that had interested me since I was a boy: fiction writing. Making up stories. Lying, though in a classy and interesting way. If musicians could find a home at MIT, I figured, then so could an aspiring fiction writer.

When I proposed this course of study to my PhD thesis committee, I expected to be reminded that my work lay in the realm of fact, not fiction. Instead, the three professors nodded vaguely. “If that’s where your interests lie …” one offered. I interpreted this as enthusiastic approval.

Fast-forward three years. I was strolling the Institute corridors, my thesis recently defended, my mood brighter than it had been in a long, long time. Through a combination of sweat and luck, I’d had my first book of short stories published, and the event was accompanied by an article in the campus newspaper. I happened to bump into one of my thesis committee members. He offered me a bemused grin. “I read about your book in Tech Talk,” he said. “I didn’t know you were writing short stories!”

“Well, I did minor in fiction writing,” I said. “You approved my course of study. Remember?”

“Ah!” he said, as though a profound mystery had been explained. “I thought you were studyingfriction!”

And so it has continued in both my careers, as a robotics researcher and fiction writer. Whenever I reveal that I’m a researcher who writes fiction—or a fiction writer who dabbles in research—I’m met with curious disbelief, as though it’s impossible to pursue such singularly distinct activities.

But what I’ve come to realize is that the two efforts— conducting engineering research and writing fiction—are much more similar than my thesis committee members (and many other people) might think.

… The two efforts—conducting engineering research and writing fiction—are much more similar than my thesis committee members (and many other people) might think.

I don’t mean to suggest that research efforts have plots or characters (save for the eccentrics that haunt university and government laboratories alike). What I mean is that the process of performing research is similar to the process of writing a work of fiction—or at least it is for this researcher/writer.

I view both research and fiction writing as exercises in structured creativity. Both begin with a blank page then progress through different stages, each focusing on an increasingly fine level of detail. To illustrate this process, let me briefly describe two of my own recent experiences: researching methods for autonomous vision-based terrain sensing by Mars surface exploration rovers, and writing a short story called On the Nature of Human Romantic Interaction. The goal of the research was to develop a method for autonomously analyzing images of Martian terrain to identify the location of large rocks and hazardous drifts of regolith (the loose, dusty material that covers solid rock below). The short story described a—fictional—failed PhD student who yearned to formulate an equation that would predict the time evolution of his flaky girlfriend’s affection for him.

Where did these ideas come from? I have no idea. Like all ideas, they emerged from the subconscious swamp of everything I’ve read and overheard and dreamed about and forgotten. Nearly all my ideas are bad ones; a few, though, throw off a certain indescribable spark. And choosing an idea—hauling it from the subconscious swamp into the harsh light of critical examination—is the first, and most difficult, stage in the creative process.

This first stage, more than any other, relies on an individual’s talent. I am convinced that talent in the research domain is expressed primarily in a person’s ability to choose interesting research problems to address. I’ve worked with researchers who were shockingly intelligent, and others who possessed formidable analytical skills—but the ones I consider most talented were neither the smartest, nor the most skilled, nor the best schooled. They were the ones who had an unteachable ability to ask the question, “What if we could do X?” (Here, X represents something startling and useful that many other researchers have overlooked.)

Talent in fiction writers can follow a similar pattern. Great writers are often unexceptional stylists—I’m thinking of Philip Roth, Richard Ford, and Robert Stone, to name a few—but possess an ability to describe a character or event or setting in such a way that its essential nature is revealed. Think of John Cheever’s (or John Updike’s) vision of American suburbia, or E. L. Doctorow’s depiction of early 1900s New York. Great writers, like great researchers, can find beauty and meaning in even the most commonplace material.

The difficulty of this first stage arises from its fundamental lack of structure. When faced with a blank page, our minds often tend toward the mundane—an imitation of a story that we heard last week; a minor variation on a technical approach that we read about last year. While it is easy to rehash an old idea, it is very hard to create something truly new. Art and science agree on this point: newness is a necessary (though not a sufficient) condition for any good work. Writers since Sophocles have struggled to make it new, since even the most shop-worn concept—boy meets girl, boy loses girl, boy feels awful—can become fresh, and powerful, when imbued with a distinctive voice, placed in a unique setting, or described in a style that challenges our assumptions about the way language must be used. In scientific research, newness is essential: if an idea is not new, it does not represent an advance in the state of the art, and, therefore, it is not worth investigating.

The next stage of the creative process involves exploring the space of our idea. Now that we know what we’re after—the problem we want to solve, the story we want to tell—we hunt for methods, techniques, and tricks that will let us solve our problem, or tell our story, in an interesting and meaningful way. Often the struggle lies not in formulating a potential approach to a problem, but deciding which among several possible approaches will allow us to most elegantly—or rigorously, or beautifully— achieve our goals. To solve a given mathematical problem, for example, one must often choose between pursuing an analytical solution or relying on numerical analysis. In fiction writing, the same story can usually be told from various different points of view; the choice of point of view—first person or third person (or second person, even)—strongly influences the lyrical and dramatic possibilities of the work.

In our efforts, we have progressed from a pair of blank pages to ones filled with scribbled notes and crossed-out questions, scrawled reminders in the margins. Our desk is piled with journal articles written by previous researchers, novels written by other writers. And as we probe equations and sketch scenes, we conduct what amounts to a search through the constrained space of our idea, hunting for something good: an analysis technique that lends insight into a particular form of equation; a combination of character and tone and setting that yield the unmistakable whiff of good fiction.

In our rover research example, this stage requires us to identify visual features of the Martian surface that yield clues about the terrain’s physical characteristics. Are features drawn from terrain color more descriptive than those drawn from texture? Should we approach the problem as one of classification or segmentation? And in our fictional example, is this failed PhD student in his late twenties or early forties? Did he quit graduate school by choice, or did he flunk out? And should the story be told from his point of view or that of his flaky girlfriend?

(For those of you scoring at home: in the rover research we decided to pursue a Bayesian approach to multiclassifier fusion, to merge the outputs of supervised classifiers operating on image color, texture, and elevation features. In On the Nature of Human Romantic Interaction, I wrote about a fortyone- year-old ex-PhD student named Joseph who dropped out of the (fictional) Michigan Engineering Institute but continued to man the twenty-four-hour computer hot line as he wooed his young girlfriend. (The equations describing the time evolution of her affection, by the way, were of the Lotka- Volterra variety.))

The final stage of the creative process is revision and refinement. We’ve figured out how to solve the research problem at hand; we understand what story we want to tell, and how we’ll tell it. Our simulation results are promising; our characters are vivid and our scenes compelling. Our conclusions feel surprising but somehow inevitable.

What remains is to bring the work to a state of near perfection by making minor (or, occasionally, not so minor) changes. This stage focuses primarily on individual words and numbers: adverbs and adjectives and gain levels and parameter values. Should the image features be extracted over an 8 x 8 pixel window, or 12 x 12? Should a filter be used to mitigate noise, or not? And if so, what are the best locations for the filter poles?

And should Joseph—poor, hapless Joseph—be forty-one years old, or will making him forty-three increase a reader’s sympathy for his plight? Should his girlfriend be named Kate or Alexandra? Should the evening sky be “eggplant-colored,” or “the color of a deep bruise?” Our work nearly finished, we scrutinize every choice—every metaphor, every variable—hoping to transform something decent into something good, something good into something excellent. And eventually—weeks, or months, or even years after we began—we quit, exhausted, unable to bear another moment’s contemplation of the work. The creative process ends with a whimper, rather than a bang.

There are individuals, I know, whose creative processes are profoundly different than the one I’ve just described. Writers who pen a single, inspired sentence, then watch a story unspool with little revision. Researchers who bash every problem they encounter with a single, well-worn analytical hammer. I’d suggest that these differences, however, say more about differences in personality than they do about the (supposed) gulf between art and science. What if? can be answered in many different ways—through an elegant assembly of equations, or through pages of interesting lies.

Karl Iagnemma is a principal research scientist at MIT and author of the books On the Nature of Human Romantic Interaction and The Expeditions.