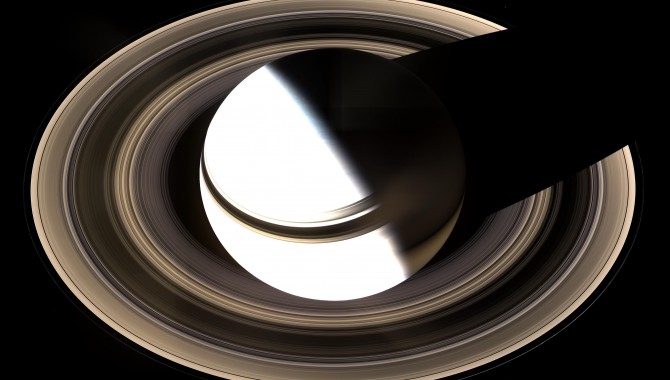 It’s amazing what you can do when you don’t have a choice. That exactly describes the Cassini mission to Saturn when its twin sister CRAF (Comet Rendezvous and Asteroid Flyby mission) was canceled. CRAF and Cassini were designed together by the Jet Propulsion Laboratory for NASA as part of the Mariner Mark II series of spacecraft in the early 1990s. The thinking was that developing a common spacecraft for deep space exploration would mean substantial cost savings for both the comet and Saturn missions. In addition, the common spacecraft design would give the Saturn craft the benefit of the larger fuel tanks needed for CRAF’s orbital mission around a small comet, and CRAF would get a large communication antenna from Cassini, which needed such a dish to return data from a billion miles away. This design approach also promised to benefit all future outer planet spacecraft.

Unfortunately, the cost of the two spacecraft grew too large, and in 1992 CRAF was canceled. This placed Cassini in a precarious position politically. Canceling one of two missions did not reduce the cost of the remaining spacecraft by half; the savings were only on the order of 25 percent. The challenge was to complete the development of the Cassini spacecraft without accruing massive cost overruns. 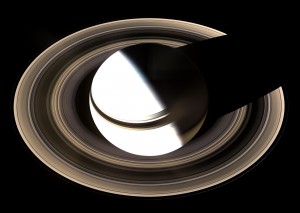 Saturn sits enveloped by the full splendor of its stately rings. Between the blinding light of day and the dark of night, there is a strip of twilight on the globe where colorful details in the atmosphere can be seen.
Photo Credit: NASA/JPL/Space Science Institute

This placed him in a difficult position. He had to determine if the request for additional resources was valid. Did the instrument development team make an honest mistake that increased the scope of their instrument, or did they take additional development risks knowing there would be reserves to help them if they got into trouble? Instrument teams tend to think reserves are their own personal insurance policies.

Cassini’s leaders knew that in the past this approach didn’t stop the cost growth of the instruments. But either a large cost overrun from an individual instrument development team or small overruns from many instrument teams could result in the cancellation of the program. Some other approach had to be used to control the growth of instrument resource demands. Desperate times called for desperate measures. The program looked to its home institution, the California Institute of Technology (Caltech), and contacted the economists from the humanities and social sciences department. The Cassini program managers wondered if economic theory could be used to control real-life development costs.

The first thing the economists did was work to understand the particular Cassini problem and then review past missions to obtain a historic perspective. After analyzing the problem, they realized that Cassini’s instrument development challenges could be resolved with a market-based system.

These systems use markets (the demand for particular commodities) to obtain better information about what is and is not really needed. They are used all over the world in all types of industries to solve scarce-resource allocation problems. But could this economic tool solve Cassini’s science instrument development issues? How could individual instrument provider demands possibly be in the best interest of the overall science payload? Finally, if the program decided to go with a market-based system approach, how could it be sure the system would help solve their particular problem? After all, they only had one chance to build their science payload within budget. Should the program use such a radical and unknown approach? Could they afford not to?

The Cassini team needed to be convinced somehow that a market-based system could solve their problem. Fortunately, the economists had a technique to allay some of the team’s concerns. They would use experimental economics to test the tool that would be used by Cassini. Experimental economics can be thought of as a kind of “wind tunnel” for human behavior. That is, it can construct an operational environment that accurately simulates the behavior of the instrument development teams. Students at Caltech could be paid according to how well they performed. Each student would have to make decisions about choosing riskier or less risky development approaches to simulate the building of their particular instruments. The lab environment would introduce random “good luck” and “bad luck” events affecting the student-run instrument teams. Those students who performed well (that is, had the smallest growth in demand for additional resources) would be paid the most. Those students who had a large growth in resource demand would be paid the least.

Once this environment was established, parameters could be adjusted to understand how changing circumstances affected students’ behavior. By performing experimental runs with various parameters, the full range of instrument development team behaviors could be modeled. The results of running such experiments at Caltech showed that the students did indeed behave like instrument teams and that a market-based system could be designed to control the resource growth of the twelve Cassini instrument development teams.

In 1993 the Cassini program opened the Cassini Resource Exchange. To help the instrument development teams get over their fear of this radical online tool, each team was assigned a Caltech student who would do the actual bidding for instrument resources under directions from the instrument managers. The students were also motivated to find and complete trades because they were paid according to their ability to make successful transactions.

To be honest, there were skeptics. Some believed that the instrument teams would play “mass futures”—that everyone would hold on to excess mass and wait for the price per kilogram to go through the roof: buy low, sell high. Others thought that capitalism was great but were not sure what it had to do with building science instruments. My favorite criticism came from individuals who thought market-based systems were a form of gambling. One thought the Cassini mission should be renamed the Casino mission!

The Cassini Resource Exchange was available from 1993 to 1995, the last three years the instrument teams were building their instruments. Some interesting trends became apparent. The first was that most teams traded for dollars and mass but were intimidated by the idea of trading for power and data rate. Both power and data rate had to be traded across multiple modes. That is, you could not trade five watts for $15,000. You had to specify how much power you wanted to trade in multiple spacecraft power configurations. This got confusing fast for the instrument developers, and most didn’t trust the system. Since it was difficult to check the results manually, most teams just stayed away from trading those resources. However, instrument teams loved “money market” trading of funds from their individual budgets.

A money market trade occurred when a particular instrument team ran into financial trouble in a particular year. An instrument team would find that its overall (multiyear) budget was fine, but they had problems in the current year. Instrument team A might request $200,000 from team B this year in return for giving team B $212,000 next year. A team would state how much they needed this year and what they were willing to pay out the following years. If no team was interested, the instrument team could request less money this year or increase how much they were willing to pay later. The beauty of this type of trade is that team A solved its financial problem and team B would get a return on its “investment.” Both teams won.

Thanks to the Cassini Resource Exchange, the program was able to successfully build and deliver all instruments on time. As for the instrument resources, the overall cost of the Cassini science payload grew by less than 1 percent. And the science payload mass shrank by 7 percent. The science instrument development manager was able to return excess mass to the Spacecraft Development Office.

When a spacecraft/instrument problem arose, the Cassini program was able to do something that had never been done before. It held a “mass auction.” In this particular case, the program needed funds for stiffer plasma wave antennas and the Spacecraft Development Office had excess mass. This problem was basically a bad interaction between the antennas and the spacecraft. Since it wasn’t anyone’s fault, the program asked the instrument teams to submit “blind” requests for mass. If instrument teams needed mass, they would submit sealed envelopes with how much mass they were willing to buy and at what price per kilogram. Once the bids were in, the Spacecraft Development Office opened the envelopes and arranged the bids from the highest to lowest price per kilogram. The program then sold mass to the highest bidders until enough money was raised to pay for the stiffer antennas.

The success of the Cassini Resource Exchange allowed for a rapid transfer of this technique to the commercial sector. The Caltech professors who developed the system started a company and created a trading system based on the Cassini algorithms. In one case, the Los Angeles Air Quality Management Board used this approach for controlling smog emissions in the Los Angeles basin. The RECLAIM system gave polluters an allocation of how many tons of pollutants they were allowed to dump into the environment. Each year the overall number of tons would be reduced. Individual companies could decide either to pay for expensive air scrubbers and then sell the “credits” that resulted from polluting less than their allocation or to buy credits from other companies. The results have been impressive, and these market-based “cap and trade” systems are being considered for the entire state of California, seven states in the Northeast, and even the Kyoto Accord for controlling greenhouse gases.

Resource trading has been evaluated by many NASA projects and was used again on Terra, the Earth-orbiting platform, to solve instrument development issues. Once again the technique did a wonderful job controlling instrument growth. People still think of a market-based system as risky, and many remain unconvinced of its ability to solve their resource problems. As more and more companies switch to market-based techniques to solve their issues, however, project managers may begin to do the same. I’m not saying that we will replace systems engineers with resource brokers, but one day soon you may be bidding your way to the launchpad.

Randii R. Wessen joined the Jet Propulsion Laboratory in 1984. He has worked on Voyager, Galileo, Cassini, and the Mars Exploration Rover projects. He has teamed with David Porter on market-based systems research for the past twelve years.