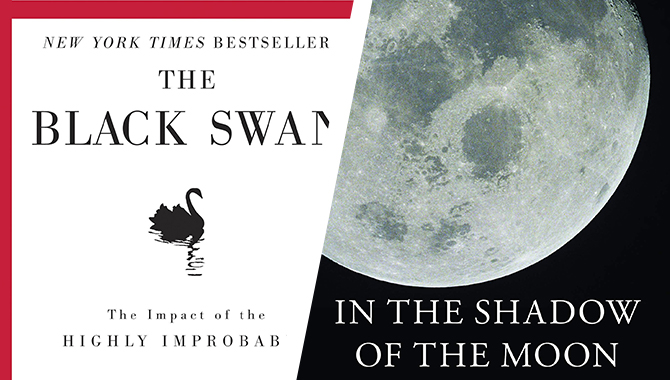 Here are descriptions of two books that we believe will interest ASK readers.

One of the most interesting publishing phenomena in the past few years is the success of The Black Swan—a most improbable best seller. Written by a commodities trader with a PhD in statistics, it wrestles with a question usually reserved for professors of epistemology: how can we know things?

Why review this book in ASK? Here are some good reasons.

A “black swan” signifies a totally unanticipated event. At one time, everyone in the Western world thought all swans were white. Exploration of Australia turned up black swans, however, creatures that deductive reasoning—reasoning from a general principle—could not have predicted. Did deductive methods allow us to predict World War I, the Internet, the fall of communism? This book makes a strong argument for using induction—basing conclusions on observed cases—as well.

Nassim Taleb takes on the industry of people devoted to predicting the future in a scientific sort of way, who develop and sell sophisticated prediction models and structures. Using logic, observations from Wall Street and politics, his own philosophic musings, and arguments from radical empiricists such as David Hume and Karl Popper, Taleb shows why the entire industry is built on air. His views are well worth pondering by NASA project managers and engineers trying to gauge risk and anticipate mission challenges.

Taleb presents a valuable point of view, which we’d call “seeing life clear.” He believes that our minds have evolved to understand events as narratives—to see them as patterned. This fools us into attributing many events to causes that are difficult or impossible for us to know at the present time. Because our brains do not feel comfortable with causal ambiguity, we create explanatory narratives to make us happy. With suitable scientific dressing, these often baseless conclusions are sold to clients for huge sums.

This book is an unusually entertaining philosophical text. It is filled with stories, arguments, jokes, invective, and rhetorical excess. If you have even a slight taste for such things, The Black Swan is for you.

In the Shadow of the Moon, by Francis French and Colin Burgess (Lincoln, NE: University of Nebraska Press, 2007)

The story is a familiar one: the trials and triumphs of the Apollo program, told mainly from the point of view of the astronauts. It is worth reading about again in this book, which dramatically details the skill, courage, and dedication that made the 1969 lunar landing possible. In the Shadow of the Moonalso offers insights that are important to NASA today. We see how communication problems and schedule pressures hindered learning the lessons of the first spacewalks and contributed to the tragedy of the Apollo 1 fire, and how personalities and politics influence decisions even when everyone is dedicated to the same great goal. We also see vivid examples of the value of teamwork and training at NASA.

Above all, the book reminds us just how extraordinary the accomplishments of Apollo were. It was a triumph of technology and will and lived up to the stirring words of William Jennings Bryan, quoted in the epilogue: “Destiny is not a matter of chance. It is a matter of choice. It is not a thing to be waited for; it is a thing to be achieved.”