Mark Twain once said, “Everyone talks about the weather but nobody does anything about it.” These days we “do” weather forecasting, and it is right far more often than it is wrong, which is fortunate for those of us in Florida and at NASA, since central Florida leads the nation in lightning strikes, and Cape Canaveral Air Force Station and Kennedy Space Center lie within “Lightning Alley.” This does not bode well for launching space vehicles. However, thanks to many new or improved technologies, NASA can now launch knowing it has the latest in technological information to keep its personnel, hardware, and facilities safe. 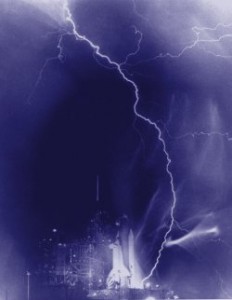 A powerful electrical storm created an eerie tapestry of light in the skies near Complex 39A in the hours preceding the launch of STS-8. Engineers have since designed a Lightning Detection and Ranging system to protect shuttle launch personnel and equipment during thunderstorms.
Photo Credit: NASA/Sam Walton

Over the course of its history, NASA has transferred technology using a variety of methods: licensing, partnering with industry, and infusing technology into its missions through the Small Business Innovation Research and Small Business Technology Transfer programs. What we consider the purest form of technology transfer—technology usually published or put on a Web site free of charge—is done by a little known office within the Applied Technology Directorate at Kennedy: the Kennedy Space Center Weather Office. What may not be common knowledge outside the weather community is that NASA, and Kennedy in particular, has made many important discoveries in meteorological science and developed groundbreaking meteorological instrumentation systems.

The ability to apply these discoveries and technologies immediately to operations is due, in no small part, to the Applied Meteorology Unit (AMU), a unique joint venture among NASA, the U.S. Air Force, and the National Weather Service. Originally conceived by a NASA “blue ribbon” advisory panel and the National Research Council, the AMU was established in 1991. The AMU develops and evaluates technology to improve weather support to spaceport operations and its customers and transitions it to operations. Its contract provides for five fulltime professionals with degrees in meteorology or related fields.

The AMU projects are chosen through formal prioritized tasking, option hours tasking, and mission immediate tasking. The AMU’s tasking process has been listed as a best practice by the U.S. Navy’s Best Manufacturing Practices Institute.

Formal prioritized taskings, which account for more than 80 percent of the AMU’s workload, are assigned by AMU group consensus, usually reached after several discussion phases. The group consists of representatives from each AMU partner agency. Six weeks prior to the quasi-annual face-to-face tasking meeting, each agency submits proposed tasks for the next twelve to fifteen months. E-mail and telephone discussions lay the groundwork for an efficient and effective meeting. The AMU tasking process has so far always achieved consensus, usually by additional modification or withdrawals of proposals to get within the resource limitation.

Option hours tasking, which accounts for most of the remaining AMU workload, is available for work that was not accepted through the formal prioritized process or which is proposed between tasking meetings. A customer who is willing to pay for the service may request that the proposed task be undertaken using option hours. Option hours work is subject to some constraints: tasks may not undertake basic research and they must relate to improving shuttle program weather support or national and commercial space program activities at the Eastern Range. The chief of the AMU makes the final decision as to whether a proposed option hours task is appropriate. If it is approved, the proposing organization provides the necessary funding to purchase the additional hours.

On rare occasions, the AMU’s special expertise and experience may be needed to assist operational customers with a situation outside their normal experience when there is no time to go through either prioritized or option hours tasking. This may happen, for example, during a launch countdown where unusual radar signatures are seen or remote-sensing and local observations appear inexplicably inconsistent. Resolving the causes of these anomalies needs to be done immediately to assure mission success. 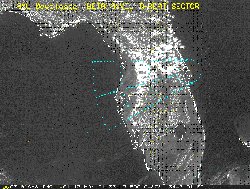 An example of the anvil forecast graphic overlaid on a visible satellite image of the Florida peninsula.
Photo courtesy Francis Merceret

Regardless of how the technology is transferred, AMU products have helped support America’s space program. One product, an anvil forecast tool, was developed to display a thunderstorm anvil threat corridor on a satellite image. An anvil is that often wispy, flat, long cloud that blows off the top of thunderstorms at high altitudes. Flying through an anvil can be dangerous because it may contain enough electric charge from the parent thunderstorm to trigger a lightning strike to the vehicle flying through it. The threat corridor is based on observed data from a rawinsonde (a radiosonde probe that measures wind speed and direction along with temperature, pressure, and humidity) or forecast data from a numerical weather prediction model. The tool allows forecasters to generate and display the anvil threat corridor as dotted lines overlaid on the latest satellite picture. If thunderstorms are forecast for the threat corridor, the time until the resulting anvils would approach close enough to violate launch or landing lightning safety constraints can be estimated from the dotted range rings on the overlay. By developing this tool specifically for the operational display system, the AMU enabled the forecasters to use the capability in real time on a system they use routinely in support of daily operations.

NASA can now launch knowing it has the latest in technological information to keep its personnel, hardware, and facilities safe.

Upper air wind changes are another major threat to the safety of launch vehicles as they ascend. Marshall Space Flight Center developed a radical improvement to signal processing that allowed those winds to be measured using a radar wind profiler located at Kennedy. The data from the new profiler algorithm was as accurate as the most accurate wind-finding weather balloon and better than any previously available commercial signal-processing methodology. In addition, the new algorithm enabled the profiler to generate complete wind profiles from 6,000 to 60,000 feet in 500-foot intervals every five minutes. The best previously available algorithm required at least thirty minutes per profile. Balloons take an hour to generate a wind profile.

Unfortunately, Marshall’s new algorithm required more computing power than was available and could only be used for research purposes because it could not be run in real time. The AMU redesigned the software to run on the operational system in real time, developed a user interface for interactive quality control on the day of launch, and wrote a comprehensive training package to enable operational personnel to effectively use these new tools. Operational use of the Kennedy wind profiler, running the AMU software and quality control interface, has already prevented loss of at least one expendable launch vehicle mission due to lastminute wind changes undetected by weather balloons.

The AMU redesigned the software to run on the operational system in real time, developed a user interface for interactive quality control on the day of launch, and wrote a comprehensive training package to enable operational personnel to effectively use these new tools.

The Kennedy Weather Office and the Applied Meteorology Unit work hand in hand to safeguard our nation’s space program from the adverse effects of lightning, tornadoes, and hurricanes. These dedicated individuals—Mr. John Madura, chief of the weather office; Dr. Francis Merceret, AMU chief and director of research for the weather office; and ENSCO/AMU employees Dr. Bill Bauman (AMU program manager), Dr. David Short, Ms. Winnie Lambert, Dr. Leela Watson, and Mr. Joe Barrett— have contributed to advancing the frontiers in the science of meteorological support to space flight and technology transfer in its “purest form.”

AMU customers have continued to fully fund and support the AMU for seventeen years despite serious challenges to their available resources. The quality of work has also warranted publication in numerous peer-reviewed journal articles, including a cover article in theBulletin of the American Meteorological Society.

For more examples and additional information about the AMU, visit the AMU Web site at http://science.ksc.nasa.gov/amu.

Carol Anne Dunn currently works as a project specialist within the Engineering Management and Integrated Services Branch at Kennedy Space Center. She is also the awards liaison officer for the Inventions and Contributions Board.

Francis J. Merceret is chief of the Applied Meteorology Unit (AMU) at Kennedy Space Center, a position he has held since 1991. He is also director of research at the Kennedy Weather Office, where he provides technical expertise in atmospheric physics and meteorological instrumentation, directs research conducted by or for the office, and undertakes scientific investigations.