Back to Top
Home/31/ASK Magazine/NASA CoLab: Creating a Space for Participatory Exploration 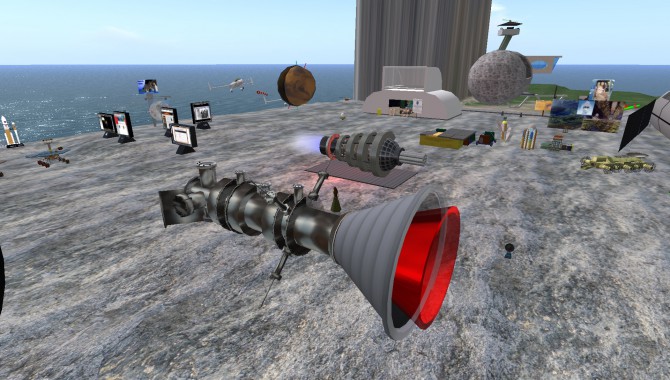 Silicon Valley has long been the epicenter of high technology, but until recently NASA maintained a low profile in the neighborhood. “NASA Ames Research Center is 1,800 acres in the middle of Silicon Valley, with neighbors like Google and Yahoo!, and [yet] you go a mile away and people don’t know that we’re there,” says Robert Schingler, special assistant to NASA Ames Research Center Director Pete Worden. “That was one of the things we wanted to do [under Worden’s leadership]— to become more a part of Silicon Valley.”

A skeptic might ask why this is important. Isn’t NASA doing fine without an outreach effort to its wealthier neighbors? From Schingler’s point of view, the Agency stands to gain a lot by opening its doors and letting others look in. “A lot of the problems that we’re actually solving are not unique to NASA,” he says. “[For instance] our information technology problems were solved five years ago by Google, and our power generation problems are currently being worked on by the clean technology sector. So the more that we can open up and allow transparency to occur within the space program, the more that other tools, technologies, and solutions can come into the space program and vice versa. We [NASA] may be developing something that is the linchpin or the missing ingredient of a new technology in a different sector.” 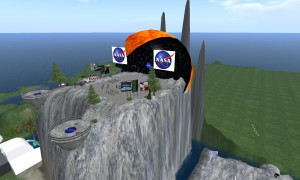 To tackle this challenge, Schingler and a small team did a brief study to figure out what they could do to help NASA become more ingrained in Silicon Valley. “We came up with a very simple thesis, and that is participatory exploration,” he says. “Quite generally, that means allowing people who don’t work for NASA to participate in a meaningful way in the space program.”

In an era of open source code, shareware, and freeware, there is no shortage of ways to collaborate using information technology. “The culture here in Silicon Valley is one of collaboration; the Web 2.0 technology tools are all about collaboration. What we tried to do is come up with a platform,” Schingler says.

The platform that Schingler and his colleagues came up with, NASA CoLab, is a series of projects and frameworks designed to foster collaboration “between the nation’s space program and talented, creative, tech-savvy communities,” as the NASA CoLab homepage explains. The project attempts to create the environment for this collaboration to occur by using online tools, experimenting with physical co-working environments, and hosting a collaboration community based in Second Life, the online 3-D virtual world created by its “residents.”

True to its Silicon Valley roots, NASA CoLab is a labor of love run by a skeleton crew. “It feels like a start-up, which is a pretty rare experience within a large government organization,” says Delia Santiago, the project’s only full-time employee. “It’s a small team, and we all do a lot and learn a lot.”

NASA CoLab’s Second Life community attracted a great deal of media attention when it was first announced. Second Life is considered a “massively multiplayer online game” that can support thousands of users simultaneously. When Schingler and his colleagues went looking for a space to host a virtual collaboration community, Second Life offered a ready-made answer. “We didn’t want to create a bunch of technology, we wanted to use what’s out there,” he says. “The easiest thing we could do was to get an island—a virtual island in Second Life. So that was what we did. We got an island … and put a flag down and said, ‘All right, we’re NASA, and we’re open for collaboration. What do you guys want to do?’ And slowly people started coming.”

A year later, the island seems to have caught on. “We have regular people from all ten NASA Centers,” Schingler says. Others have followed NASA CoLab’s lead: the Jet Propulsion Laboratory set up its own island in Second Life. The NASA CoLab island includes a sandbox where people can “play” with and build space-related objects, but the majority of the island is actually meeting space, Schingler says: “A number of space organizations use it for their weekly meetings.”

The NASA CoLab team is quick to point out that the collaborative tools they use are not meant just for younger, techsavvy users. “One of my favorite things is working with someone who isn’t familiar with Second Life or Twitter and is maybe somewhat afraid of the technology, and helping them see that these are just tools, and they’re not hard to use,” says Santiago. “You don’t have to be an über tech geek to get something out of Second Life.”

Schingler sees big possibilities for the long-term future of virtual collaborative environments in space exploration. “As Pete Worden says, the next time a human lands on the moon, we all get to go. Rather than watch it on a black-andwhite television like we did in the past, we want avatars to be there, and we want it to feel like you’re experiencing what it’s like to be there.”

By hosting the salons in San Francisco, we are bringing NASA to the audiences we want to reach and making it easy for them to learn, experience, and hopefuly participate with NASA’s innovators.

NASA CoLab’s online tool set includes a space for collaborative conferences. The team has been deeply involved in two conferences with the Next Generation Exploration Conferences (NGEC). After a highly successful initial conference in 2006 sponsored by the Exploration Systems Mission Directorate, a second conference took place in February 2008. Billing itself as a gathering of emerging global space leaders to design the future of space exploration through direct input at NASA’s highest levels, NGEC-2 focused on “Entrepreneurial Opportunities in Lunar Development.” The proceedings from this second conference will be published online in the near future.

NASA CoLab’s in-person collaborative community includes a series of salon gatherings in San Francisco, called Luna Philosophie, and experiments with co-working environments. The Luna Philosophie series features NASA guest speakers followed by group discussions, as well as plenty of time for socializing. “By hosting the salons in San Francisco, we are bringing NASA to the audiences we want to reach and making it easy for them to learn, experience, and hopefully participate with NASA’s innovators,” says Schingler. 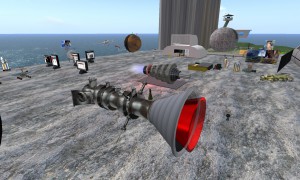 Several models of current NASA projects are available in the CoLab, offering users an opportunity to learn more about what NASA is doing.
Image Credit: © 2008, Linden Research, Inc. All Rights Reserved.

During the next year the NASA CoLab team plans to play more of an enabling and facilitation role for participatory exploration projects across NASA. “We intend to document some of our successes and make it easier for other NASA Centers to create environments to support their innovators and facilitate participatory exploration elements of their missions,” says Schingler.

Find out more about CoLab at http://colab.arc.nasa.gov. Read the proceedings from the 2006 Next Generation Exploration Conference at http://ngec.arc.nasa.gov/2006proceedings.