Back to Top
Home/34/ASK Magazine/From Generation to Generation: Filling the Knowledge Gaps 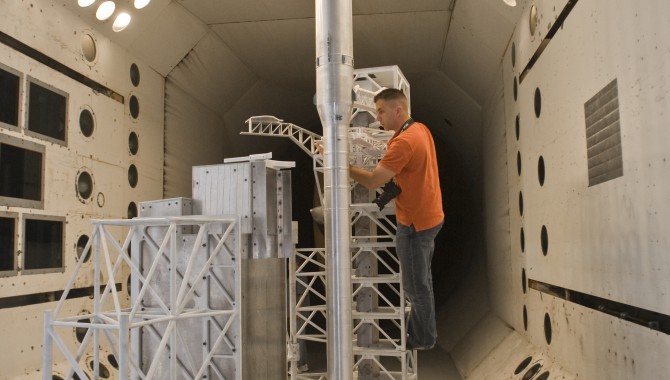 In 2006, when the staff of the Aeroelasticity Branch at NASA’s Langley Research Center learned that it would test ground wind loads for the Ares I-X launch test vehicle, Donald Keller and Thomas Ivanco went in search of history.

The branch had performed similar tests in the Transonic Dynamics Tunnel (TDT) in Hampton, Virginia, for the Saturn V that was used to carry Apollo aloft but had conducted few such tests since. After all, NASA hasn’t built a human-rated launch vehicle designed to send astronauts to the moon and beyond since Saturn V in the 1960s. 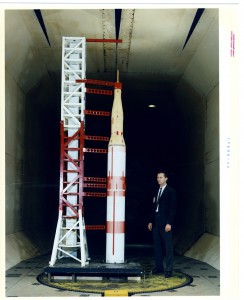 An engineer stands next to a 3 percent-scale Saturn V model in the Transonic Dynamics Tunnel at NASA’s Langley Research Center in 1966.
Photo Credit: NASA

What Keller found was discouraging. “A lot of the reports summarized the results of the tests, but there wasn’t a lot of detail about steps that were taken from model concept through fabrication and testing, and how things were done or even why, in some instances,” said Keller, who—with Ivanco—oversaw TDT testing and preparation of the 4 percent–scale Ares I-X ground wind loads model during fall of 2008.

The same lack of documented knowledge hampered interpretation of the Ares I-X test data for Systems Engineering and Integration, which ordered the tests. That was primarily Ivanco’s job, and he struggled to understand what to do with the data from the tests for his report in March. The real difficulty was in translating the model data to a full-scale vehicle.

“Because of the limitations of the data systems in the sixties, a lot of data acquisition involved somebody writing something in a notebook,” Ivanco said. “They were sometimes reading an analog gauge and recording it by hand. Portions of that data ended up in the final reports, but where did those notebooks go?” Many of the tests also recorded data on analog tapes, which also were long gone.

While musing over those knowledge gaps, Keller said, “We started seeing things that we didn’t understand as we got more seriously into the project.” If the answer wasn’t on paper, they figured, maybe it was with the people who wrote the paper. “We realized that anybody we could talk to would give us more than we had,” Keller added.

Bill Reed and Bob Doggett, both retired from NASA, come to Langley once a week to work on archiving reports, pictures, and data for the TDT. More important to Keller and Ivanco was that Reed and Doggett both worked at the Aeroelasticity Branch during the days of Mercury, Jupiter, Gemini, and Apollo. And, yes, they had read a gauge and recorded data in a notebook while testing Saturn and Apollo. More to the point, they used strain gauges linked to an oscilloscope that measured loads and motion in two directions.

“We discovered that if you put these two signals on an oscilloscope and just let it run, it runs a pattern,” said Reed, who was deputy branch manager during the Apollo days. “You’d see an envelope that defines the outer bounds of the loads relative to the wind.

“We would take a piece of tracing paper and put it on the screen and take a pencil and outline this figure. Then we had the loads. Then we graduated from the tracing paper to a Polaroid camera, and we’d just take a picture of it.”

A computer that generates colorful charts does that work today, but having the original test background offered insight into what the computer tells the researchers. 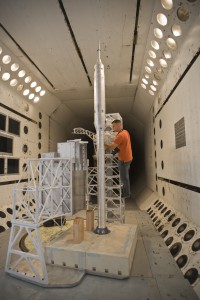 “Today engineers are looking at displays of exactly the same sort of data that was acquired and examined all those years ago,” said Doggett. “Conceptually, the data are reduced in the same fashion, but the devil is in the details—going from hand tracings to Polaroid photographs and finally to today’s computers.” Added Keller, “People like Bill Reed and Bob Doggett were good to talk to for more detail than we could glean out of the reports.”

And so the search for history broadened. A net was cast for retired NASA employees who could offer insight into how testing was done forty years ago. Those retirees still around came forth eagerly, and four contributed insight into how to scale the test articles, how to conduct the tests themselves, and what to do with the data. “We wanted to help,” said Reed. “We didn’t want them to have to reinvent the wheel.”

Questions came as the project evolved. Take damping, for example, and how it affects oscillations generated by the winds Ares I-X will find on the launchpad at Kennedy Space Center. Pictures from a past report showed a viscous damper that used fluid and weights to help determine how to counter ground wind loads.

“I told him what I knew,” Reed said of Keller, then met the query one better. A notebook from his attic produced figures that hadn’t been in the test report all those years ago. Those figures could be used to help check formulas today.

A damper was built for the Ares wind-tunnel model, but “it didn’t turn out as well as they had hoped,” Reed said. Back to Reed’s attic: he had a scale model of a damper used on a long-ago test.

“It gave us an idea for a follow-up design for a damper,” Keller said. “It led us down the road to what we eventually used.”

Said Reed, “Then they developed a more advanced kind …”

Reed pointed at a picture. “This was crude,” he said, “but it got us by in the Saturn program to get the damping needed to see how it affected the vehicle response to winds, and it ultimately was included in the full-scale hardware at the Cape.”

The success of Saturn V and Apollo is a point Reed and Doggett use in talking about the more limited work done four decades ago. Keller and Ivanco tested Ares I-X with thirty-one wind-speed readings, each about 15 seconds long, 500 samples per second. All were taken from seventy-two different wind angles, a tedious process. Yes, Doggett and Reed will say, they used fewer measurements with fewer sensors, but Saturn flew and Apollo landed on the moon and returned.

… Keller said, “We started seeing things that we didn’t understand as we got more seriously into the project.” If the answer wasn’t on paper, they figured, maybe it was with the people who wrote the paper.

“They were very vague about it in the reports,” Ivanco said. “You would read the reports, and they would mention, for instance, that they applied a piece of tape to the model and the dynamic loads changed by an order of magnitude. But that’s all they would say. They wouldn’t say which way or offer theories as to why or describe the test conditions they were doing when they put the tape on.”

Some answers were provided by people who were there at the time. Many answers simply were no longer available because the people were no longer available. And some questions were never answered at all. And so, if the wheel wasn’t reinvented, it was certainly modified to fit 2008–2009 test parameters and those likely to be used in the future.

“One of the reasons the reports that Tom and I are writing right now are vastly more detailed than what they did before is that we do not want future researchers to have to try and figure out what steps we took and why we took them,” Keller said. “But again, a lot of these past reports were probably supporting some projects, and they had to get the bottom line out fairly quickly. They summarized what they needed to summarize, but nobody ever went back to provide the details.”

Keller and Ivanco will leave a legacy of data that Reed, Doggett, and their co-workers could not. “Nowadays you can store the data on DVDs or hard drives, something that will last longer,” Keller said. “Back then, they had magnetic tapes that were thrown out or broke down or whatever. You can store DVDs on a bookshelf, but those tapes would have filled cabinets.”

Reed understands. “That’s why we have this archives effort here,” he said.

Both generations lament the knowledge gap between NASA efforts on Apollo–Saturn and Ares and applaud what’s happening now.

“I used to wish I had been here in the heydays of the Apollo era,” said Ivanco, who wasn’t yet born when Neil Armstrong set foot on the moon. “I used to think that must have been something, working for NASA back then, going to the moon, pioneering.”

It was, said the pioneers.

Added Doggett with a laugh, “And if they want more, they’d better hurry.”