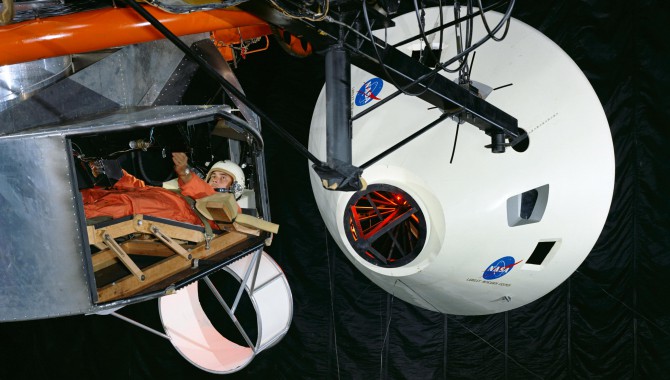 It began with $2,000 and a cable hanging from an I beam in “The Hangar” at NASA’s Langley Research Center in Hampton, Virginia. From that simple start almost five decades ago grew the Rendezvous Docking Simulator, first used to demonstrate linking a Gemini spacecraft with an Agena target in space and, later, to gather data and eventually to teach astronauts to link an Apollo lunar excursion module, just back from the moon, with a command module. Without that link, there might have been no Apollo mission. Certainly, the deadline set by President Kennedy’s May 25, 1961, commitment to land on the moon before the end of the decade would not have been met. 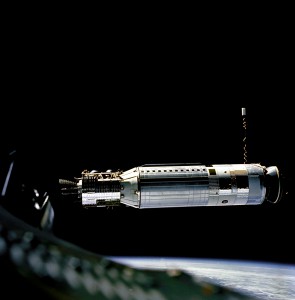 A profile view of the Agena Docking Target Vehicle as seen from the Gemini 8 spacecraft during rendezvous in space.
Photo Credit: NASA

A surplus hydraulic motor from an aircraft drove one end of the cable along the roof, and a man hung from the other, wearing an air tank and carrying a hose with an air gun that he could fire as though it were a thruster. On the floor of the hangar, engineers watched and took notes.

“The idea was to simulate what a guy would have to do if he was going to navigate in space from one place to another,” said Jim Wise, who communicated with astronauts “flying” the Rendezvous Docking Simulator by intercom.

“These guys were smart enough to bootleg some parts and help make it work with that $2,000,” Wise said, adding, “To talk about this now seems so juvenile, but you had to start somewhere. Some of the aircraft people said, ‘These space guys are just playing.’”

In fact, the space guys were putting in motion a plan that one of their own had charted on a blackboard and sold to NASA hierarchy over the objections of space pioneers, including Wernher von Braun and Max Faget. John Houbolt, assistant chief of the Dynamic Loads Division at Langley, ran the numbers involved in landing on the moon, then taking off again in a 65-foot spacecraft versus one only 14 feet tall, and launched a campaign for a concept called lunar orbit rendezvous. A primary issue, he said, was lifting from Earth the 82,700-lb. moon lander that would be required for Earth-orbit rendezvous versus one weighing 19,320 lbs.

“One thing that most people don’t grasp right away is that simulators that are tasked to study a specific thing do not have to be authentic in detail.”

“John Houbolt stuck his damn neck out, is what he did,” said Donald Riley, who also worked on the simulator. “Houbolt knew we couldn’t take all that weight to the moon.”

The catch to Houbolt’s idea was literally a catch. If the lunar excursion module couldn’t dock with the command module that was orbiting the moon at 17,000 mph, 240,000 miles from Earth, the result would be two astronauts finally walking on the lunar surface but never getting back home to talk about it.

Langley set out to build a simulator. As with all simulators, it began with this premise: “One thing that most people don’t grasp right away is that simulators that are tasked to study a specific thing do not have to be authentic in detail,” said Wise. “You only have to detail the part you are studying. That means that some of the simulators appear to be extremely crude, but as long as they are faithful to that part you are studying, it’s OK.”

From the cable, the docking simulator continued to evolve in fitful phases. “We used lots of junk,” Wise said, laughing. “I remember I got a catalog of government surplus stuff, and we used a lot of it on simulators at Langley.”

Thrusters mounted on a pilot’s helmet to foster a sensory aspect to spaceflight bridged the gap between the rope and designing and building a simulator that would effectively mimic a real docking. One primary idea for the simulator evolved from the trial-and-error experimentation: it had to react in many ways like an airplane.

“I don’t think it ever was going to be a trainer,” Yenni said. “We wanted the data for research.” But training evolved.

“We needed six degrees of freedom for pitch, roll, and yaw,” said Dick Yenni, one of several NASA test pilots who participated in the development of the Rendezvous Docking Simulator by “flying” it and offering feedback to developers before the astronauts became involved.

Another breakthrough came when an analog computer showed up at Langley to monitor and record data from tests on an F-101. “It was a big computer: 5,000 vacuum tubes, 20 feet long, 6 feet high,” Wise said. “Then they canceled out the F-101 contract when the space thing got going. So what were they going to do with this computer?”

The computer was taught the characteristics of docking in space. Said Yenni, chuckling, “You could probably do as much with a laptop now.”

The design group was headed by Arthur W. Vogeley and Max Kurbjun of the Space Mechanics Division, along with Roy Brissenden, Alfred Meintel, Jack Pennington, and Marvin Waller. Finally, the group believed it had the idea they needed, and on June 3, 1961, $243,020 was requested for a docking simulator.

The cockpit was that of Gemini, with a window in front of the pilot. The cockpit was inside a gimbal that allowed the required six degrees of roll, pitch, and yaw, and it was to run on a 210-foot track, 40 feet in the air in the cavernous Langley hangar. 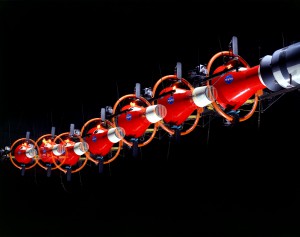 But once on his back in the simulator, how would an astronaut dock with the capsule?

“When they ‘flew’ this thing, they couldn’t see the capsule out of the windshield,” said Sheila Thibeault, then a recent college grad. “They had to use a television camera, a closed-circuit camera. My job was to work on the visual acuity and Vernier acuity, which translates into accuracy.” Basically, Thibeault worked on lining up the dim cross-hairs on a black-and- white 1960s television screen.

“We would run at night, with all the windows blacked out,” said Yenni. “We had an Agena target at the north end of the hangar, and we’d start at the south end.”

The Agena target vehicle was developed to launch into space to provide a target for Gemini’s rendezvous. Several different lighting patterns were tried to allow the pilots to pick it out from the background of stars.

As Apollo evolved, so did an Apollo cockpit and command module target for the simulator. The cabin was fitted out with airplane instruments, altered for its space mission. The carriage was electrically driven, and so were the pitch and yaw controls. The gimbal was hydraulically driven, and so was the roll control. All that information was fed into the computer in the corner of the hangar.

That information was Langley’s primary concern. “I don’t think it ever was going to be a trainer,” Yenni said. “We wanted the data for research.”

But training evolved. The original seven astronauts were stationed at Langley as NASA’s space program began and migrated to Houston with the nucleus of the Space Task Group in 1961. They returned to Langley to work on the Rendezvous Docking Simulator and the lunar excursion module simulator, which was built to train the astronauts to handle the final 150 feet before landing on the moon.

Wise worked on the intercom with the astronauts as they trained on the simulator.

“Buzz Aldrin spent a lot of time in our facility when he wasn’t flying the simulator, just observing how things were going, learning things to put into his paper about the rendezvous,” Wise said.

Aldrin’s doctoral thesis at the Massachusetts Institute of Technology was entitled “Guidance for Manned Orbital Rendezvous.”

“I remember working with John Glenn,” said Wise. “Alan Shepard spent time with us; Grissom; Neil Armstrong came from a town about twenty miles from where I was from in Ohio.”

Training in the simulator that was built to provide data for Langley became a requirement for being launched in Apollo. 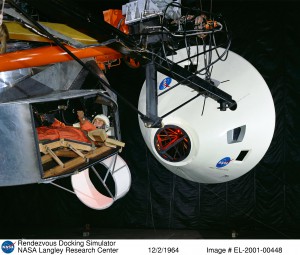 “They kept coming back,” Wise offered. “I think that’s the sign of a satisfied customer.”

When they came back, they signed a poster picture of the simulator in Vogeley’s office. Only one astronaut who trained on the system did not sign: Ed White, who trained twice but died in a fire on the launchpad at Cape Kennedy before he could add his name to the poster.

Ultimate proof of success came on July 20, 1969, when Aldrin maneuvered the lunar excursion module from Apollo 11 into place and he and Armstrong docked with the command module piloted by Michael Collins.

With the end of the Apollo program, the simulator was adapted to research on open- and closed-loop pilot control issues, aircraft landing approaches, simulator validations, and passenger ride quality.

It no longer is used, and in 1985 it was added to the National Register of Historic Landmarks. The Rendezvous Docking Simulator hangs from the rafters in the hangar, an orange reminder of a time when pioneers were everywhere in NASA.

“It was interesting, following the moon shots on television,” Wise said. “You’d work and you’d come home and there it is. Sometimes I still can’t believe how lucky I was. I had a very small part of something that was extremely big.”

A part that started with a cable hanging from an I beam at the top of the hangar.