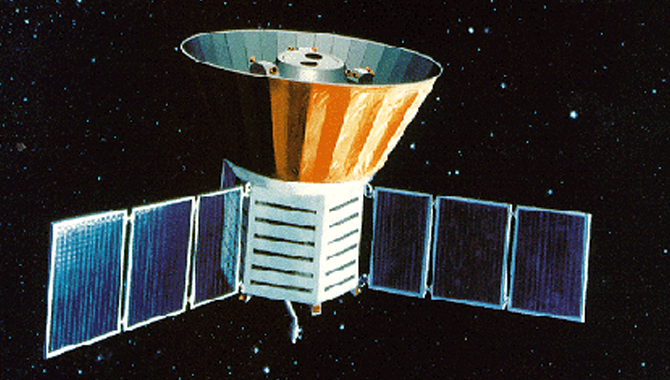 COBE was launched into an Earth orbit in 1989 to make a full sky map of the microwave radiation left over from the Big Bang.
Credit: NASA

How did the universe begin? Humans have asked the question for millennia. In the modern age, scientists have focused on determining the physical origins of the universe. The designers of the Cosmic Background Explorer (COBE) satellite proposed to provide hard evidence to support some longstanding hypotheses about the nature of the early universe. COBE’s instruments were built to measure two types of radiation — diffuse infrared and microwave radiation — that many physicists, including COBE Project Scientist John Mather, believed to be artifacts of the Big Bang, the moment when the universe burst into existence.

COBE was slated to launch on the Shuttle in 1989 from Vandenberg Air Force Base. The Shuttle would place the satellite at an altitude of 300 kilometers, and an on-board propulsion system would then raise it to a circular 900 kilometer sun-synchronous orbit.

By the time Deputy Project Manager Dennis McCarthy joined Project Manager Roger Mattson’s team in 1983, the scheduled launch was a full six years away. There was little question in McCarthy’s mind that the science team would need that much time, if not longer. The instruments were all based on new technology, there was no guarantee that they would perform as expected, and they were already behind schedule.

The team that Mattson and McCarthy managed made significant progress. By the beginning of 1986, the COBE spacecraft was all but complete and proceeding smoothly toward its planned launch on the Shuttle. The instruments were not ready — they would be the last piece of the puzzle — but the other elements had fallen into place as expected. The project team had built a wooden mockup of the Shuttle and completed most of the electrical harness and electronics that would power and monitor the spacecraft and its instruments.

The loss of the Space Shuttle Challenger 73 seconds after liftoff on January 28, 1986 changed everything. Challenger was a tragedy for the nation as well as for NASA. For the agency, the implications were vast. Above all, the loss of the seven-person crew was unspeakably painful. The accident led to the immediate grounding of the Shuttle fleet and the establishment of an independent commission to study the accident and make recommendations. The Shuttle program’s future was far from certain. This had dramatic consequences across NASA, and not just for its human space flight program. The Shuttle was NASA’s primary means of delivering payloads to space — the agency had stopped relying on expendable launch vehicles such as Delta or Atlas rockets — and as a result the supply of alternatives had dwindled.

The morning after the accident, the COBE team was forced back to the drawing board. “We were abandoned,” said McCarthy. “This was the worst possible thing that could happen.”

McCarthy called a meeting of everyone involved with the project. “I pulled everybody together, and we decided to keep going. My job was to get this into space, whatever the way.”

Read the rest of the COBE case study.