I once had a NASA project manager who was notoriously hard to work with lament that people were leaving his project as fast as they could. Another project manager, who had no trouble retaining people, told me one of his secrets to success was to manage team members like volunteers. This insight intrigued me. 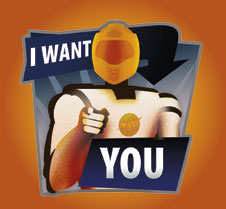 NASA technologists definitely have some similarities to volunteers: they both dislike poor project management (the number-one reason volunteers quit), and they both have options when faced with an unpleasant work situation. While NASA technologists may not be able to just quit the way volunteers can, they certainly have more options than their counterparts in the private sector. Typically, NASA project managers do not directly supervise the employees supporting their projects. Instead, employees are matrixed from other organizations, which also support several other projects. So if a technologist is dissatisfied with a project manager, there is a chance she could move to another project. This chance greatly increases with the technologist’s experience and competence, the demand for her particular skills, and the number of other projects the organization supports.

To help keep the best technologists onboard, NASA project managers can benefit from understanding how leaders of volunteer organizations attract, motivate, and keep talented people working for them. The United Press Service report, “A Guide to Investing in Volunteer Resources Management: Improve Your Philanthropic Portfolio,” includes a comprehensive list of best practices for managing volunteer organizations, many of which could help NASA project managers retain the best employees.

Developing and Communicating a Compelling Vision

Project managers must “walk the talk,” demonstrating the commitment, values, and beliefs they want from their teams. In my experience, project managers who live up to the standards they profess inspire team members to meet or exceed those standards. On one project I worked on, members of our team were letting personal pride get in the way of working with other teams. The project manager called us in and talked about how our team needed to swallow its ego for the sake of the project. At the next project review, we saw him set the example when he ignored multiple insults from one of the project’s sponsors, attacks I know I would have taken personally. Instead, he stayed focused on the project’s technical problems and how to solve them. His demonstration of what he was telling us to do made us check our own egos at the door for subsequent project meetings. Had he not done so, it’s doubtful the project would have pulled itself together. Project managers who fail to meet their own standards will be seen as hypocritical, which greatly diminishes their team’s trust and will eventually lead to reduced support.

Managers need to make clear the project’s goals, timelines, organization, lines of authority, and roles—their own and those of other key leadership positions in the project.

Ensuring project personnel understand what they need to know to support the project from the very beginning is an important task for project managers. Managers need to make clear the project’s goals, timelines, organization, lines of authority, and roles—their own and those of other key leadership positions in the project. Most importantly, the project manager must convey what is expected of the team: what they are required to do and how they are expected to perform. To the extent possible, job descriptions and project policies should be documented and accessible.

If possible, project managers should screen employees before they join the project teams to determine if they would be a good fit technically and otherwise, particularly on smaller projects. They should look for a genuine desire in each person to play an active role in the overall success of the project.

Volunteers want to feel supported by the organizations to which they donate their time; so do NASA personnel. Ensuring that employees have the resources they need to get the job done is one way project managers can provide that support. Another is to offer developmental support to help employees do their current jobs better or prepare them for future positions. NASA project managers have several opportunities to support employees’ training, such as classes offered by the Academy of Program/Project and Engineering Leadership or university classes through NASA’s education system. Very often, projects reap immediate benefits as project personnel bring back new knowledge and apply it to make their projects successful. For instance, a project manager once sent me to the Massachusetts Institute of Technology for a short course on a new analysis technique. The moment I returned, he formed an analysis team whose product was based on the results provided by the new technique. Both the team and I benefited from the time our project manager took to aid my professional development.

Project managers should also be following the old management axiom that what gets measured gets done. As the project moves forward, monitoring the performance of project personnel is key. This allows the project manager to address problems sooner rather than later and provide feedback on how employee efforts are helping the project reach its goals. Employees want to know their efforts make a difference. But project managers should also actively seek feedback on their own performances. Some questions that would provide useful feedback might include the following:

Of course, employees may not be willing to share this kind of information openly, so developing a way to anonymously submit feedback may help. Hearing criticism is never easy, but there is always room for improvement. After receiving the results, project managers may want to work with a coach or mentor to improve in areas indicated by their former staff.

For more than a year, I have been working with a coach who is helping me to strengthen weaknesses indicated by my peers and through direct reports. Doing so has helped me increase my ability to listen, giving me more options to successfully conclude my projects. When personnel feel their ideas have value for you, they generally want to keep working with you.

NASA project managers would also do well to remember another management axiom: what gets rewarded gets repeated. Appreciation tends to be listed as one of the primary motivators for employees and volunteers. Usually the simplest, and perhaps the most effective, way for project managers to motivate employees to keep working for them is to sincerely offer thanks for an effort well done. One NASA project manager I worked for (and would work for again) was rarely able to reward his employees monetarily, but he always made us feel appreciated by consistently recognizing and sincerely thanking us for our efforts. Combining rewarding with communicating can help reinforce behaviors project managers want from their employees.

As any project manager in the private sector will tell you, retaining good people is critical to success. Investing the time and resources into training replacement personnel is costly on many levels. NASA technologists, like volunteers, have a lot of say over the projects they will and will not support. Therefore, it may be in NASA project managers’ best interests to view the people supporting them as volunteers and provide the compelling vision, support, communication, and recognition required to retain their support.