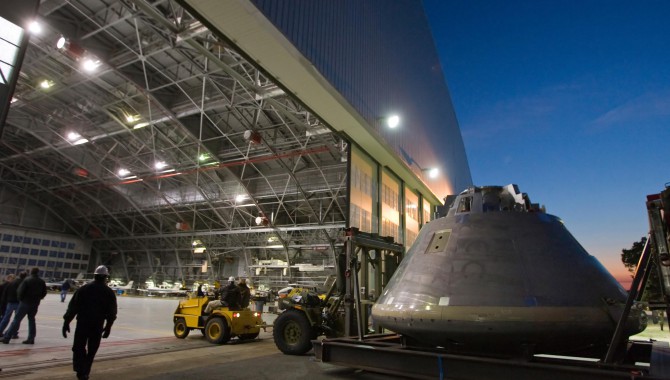 Knowledge obtained from decades of exploration and discovery, in space and here on Earth, would remain unknown if no one learned about it. 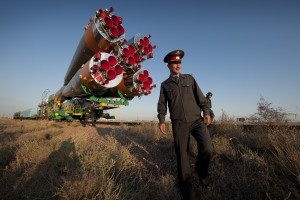 Russian security officers walk along the railroad tracks as the Soyuz rocket is rolled out to the launchpad on Sept. 28, 2009, at the Baikonur Cosmodrome in Kazakhstan. “It’s just so different, a train pushing a Soyuz out to the pad as opposed to the crawler with shuttle. There’s lots of different ways to capture that creatively,” said Ingalls. “Now I’ve done it so many times that it’s become a real challenge to make a different and unique picture each time. And to make it seem fresh and new, what it’s become more of now—and unfortunately it’s a harder thing to do—is try to capture the people and the personalities behind all this.”
Photo Credit: NASA/Bill Ingalls

One of the most effective ways to share that knowledge is through photography. A single image can tell a story and capture history more vividly than reading, as the cliché goes, a thousand words. Photography gives us permission to stare—to absorb, study, and understand.

When one-of-a-kind projects launch into orbit, there’s often only a moment to capture them so current and future generations have a chance to study them in depth. For missions that stay closer to home, macro and telephoto lenses allow photographers to give a close look at things that might otherwise be invisible.

The beauty of a photograph is that not everyone sees the same story in an image. Engineers may marvel at successful technology, students may think about the adventure of spaceflight, and scientists may glean previously unseen information about Earth and space.

Similarly, no two NASA photographers see things in quite the same way. “I was always amazed with how many times the Space Shuttle and its launches have been photographed, the way each photographer approaches that subject,” said Langley Research Center photographer Sean Smith. “I’m amazed at how different and beautiful are the different visions of the shuttle—it’s never really the same shot twice. That’s just an example of how many ways can you shoot the same thing, but with just a little bit of your own vision, it’s different every time.”.” 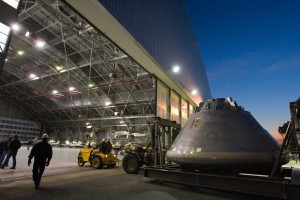 A mock-up of the Orion space capsule heads to its temporary home in a hangar at Langley Research Center. “It was close to eight hours of them moving it from where it was, and I was hoping we’d have enough light,” said Smith. “This shot was forced luck. I just stuck with it. I had shot through my card, and I was deleting as I was running along with the capsule. The sun was going down, and I just had enough sun on the horizon that made it pop a little bit. Paired with the lights of them going into the hangar, it just made the shot.”
Photo Credit: NASA/Sean Smith

For each assignment, NASA photographers learn as much as they can about the topic before they go out to shoot it, often viewing photographs that have been made by previous generations and by current colleagues to gain additional understanding and see what’s already been done. But some things can’t be learned until they’re actually on site.

“I was amazed my first time in Russia,” recalled Ingalls. “The hardware itself, in the beginning, was unique to me and to a lot of the viewers of the imagery, I think. It’s just so different—a train pushing a Soyuz out to the pad as opposed to the crawler with shuttle. And the environment is different. I remember once I was lying down next to the railroad tracks as the Soyuz was coming and thinking, ‘Any minute someone is going to tell me to get out of the way,’ but they didn’t care. As long as I didn’t stop that Soyuz, if I wanted to get crushed, that was my business. Now, of course, they would not let me stay there—safety comes first.”

Working closely with the people building, launching, and operating missions has become an important part of telling NASA’s story through photography. “They’re the content experts,” explained Smith. “They know what’s going on, and they can explain it to me, which helps me realize what I’m trying to capture. Sometimes you go in and feel a little intimidated, but when you start meeting these people and talking to them, they’re gracious. They really try to help you get the best shot possible. And they’re interested in what you’re shooting, too.”

In one case, Smith arrived on location for an assignment and decided to do a site survey to prepare for the next day. What he discovered was a field test in progress for a mobile chassis, part of the Desert Research and Technology Studies (Desert RATS), with a perfect backdrop of golden-hour light and puffy clouds.

“I had just flown in, it had been a long day, and I just threw my bags in my hotel, and I walked up on the chassis. I just started shooting,” recalled Smith. “Later I found out someone was not so happy with what I’d done because they had no idea who I was, and I talked to that person. Once we talked, he was like my best friend. He said, ‘You just stick with me, and I’ll show you where you can shoot, what you can shoot, and what you can’t.’ He even let me get on back of the buggy. I got some great stuff out of that trip.” 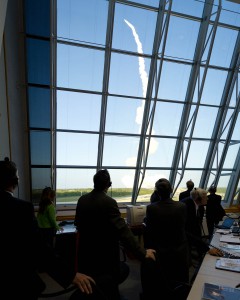 NASA management watch the launch of Space Shuttle Discovery on its thirty-ninth and final flight from the firing room at Kennedy Space Center, Feb. 24, 2011. “Since Return to Flight, I’ve been in the firing room, which is a real thrill for me because I hadn’t been in there before that,” Ingalls said. “But there again, I’ve done that so many times that it’s a real challenge to come up with something new. What I like about that is it s all about the faces there. It’s all about the emotion. It’s about trying to capture that emotion but tie something in to be sure it tells a story.”
Photo Credit: NASA/Bill Ingalls

Ingalls had a similar experience when he began to photograph launches from the firing room at Kennedy Space Center. “The first time I was in the firing room, I did get a lot of people looking at me like, why is he in here? But now I’m pretty well received.” This has allowed him more freedom to capture the emotions of those involved in each launch and share that emotion with those outside NASA, giving the public a glimpse at the people behind the missions.

And future generations’ ideas of NASA will be shaped by today’s images of the space station and planetary exploration. “I have a son that’s five and a half and I’ve got a daughter that’s almost three, and I show my work sometimes to my son,” said Smith. “I’ll get a, ‘Cool,’ and then, ‘What’s for dinner?’ And that’s fine, but I know somewhere down the line, when he’s older, he’ll look back on some of these pictures. This is stuff that he’ll be looking at hopefully years from now, and it’s something for him to remember me by. I know I’m shooting for NASA, but at the same time, I’m leaving something for my kids as well, and for other kids that will grow and see NASA.”

For those who will learn about NASA in the future, it’s as important to document the failures as it is to share the amazing successes, so those who follow do not make the same mistakes. Ingalls learned this most poignantly after the loss of Columbia.

He was at home when his phone rang to inform him of the loss and request his assistance at Headquarters. One of his responsibilities was to go to the room where people from NASA management and outside agencies had gathered to find out what had happened and photograph then–Deputy Administrator Frederick Gregory. Ingalls shadowed Gregory to another room, where the deputy administrator began making calls immediately to form an investigative commission. 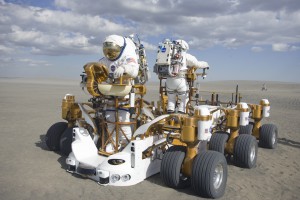 The crew mobility chassis prototype being tested at Moses Lake, Wash., as part of a series of tests of lunar surface concepts. “When I first walked out there to do a site survey, they had the Desert RATS on their little chassis,” Smith said. “I just walked up on the chassis as they were working on it. That was one of the few times, right off the bat, I got some really decent shots just doing the site survey.”
Photo Credit: NASA/Sean Smith

“While the circumstances were terrible, I’m glad that we were let in to document that for historic purposes.”

Once a NASA photograph is released to the public, both Ingalls and Smith said they’re already thinking about the next photo to be made. What’s to come—and what they’ll learn—is just as exciting as where they’ve been. And they use their past experiences to build upon future ones, striving to improve each time they go out on assignment.

As many stories as they’ve shared, they know there’s another waiting to be told.

“Just look at the iconic shots of Mercury astronauts, the Apollo astronauts,” said Smith. “It’s a storyline, and it’s a great story. It continues to be a great story, and it just needs to be documented—wherever we go next.”