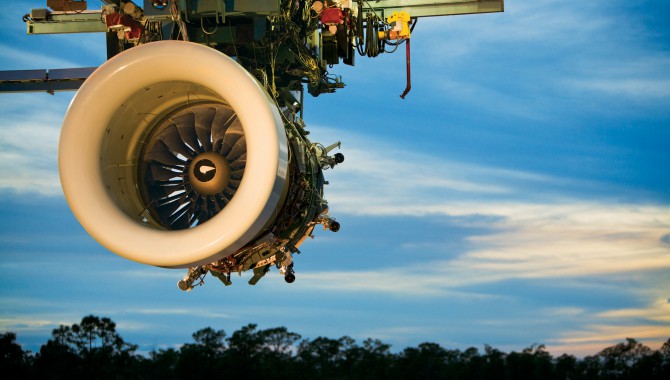 Before my conversation with Alan Epstein, the new—and first—vice president of technology and environment at Pratt & Whitney, my only concern about my flight out of the country this summer was whether I’d board on time. Now I know that my air travel will be among the nearly 10 million flights taking off from U.S. airports this year, pushing out 2 billion metric tons of CO2, consuming about 20 billion gallons of jet fuel, and roaring out 91 to 95 decibels of noise. With Boeing and Airbus predicting that air travel will continue to grow 4 to 5 percent per year for the next thirty years, it’s no wonder Pratt & Whitney and the aviation industry as a whole are dedicated to finding more environmentally friendly ways to fly.

In the past the aviation industry has concerned itself with compliance and environmental regulations, such as meeting noise and nitrogen oxide emission standards required by the International Civil Aviation Organization. There are several regulations with which the industry must comply, but with climate change concerns—and the industry itself—growing steadily, the focus is shifting from mere compliance to actively pursuing environmental improvements. A large part of Pratt & Whitney’s response to this challenge was the creation of Epstein’s current position. “In previous decades, our predecessors in aviation thought you could negotiate environmental standards; they were secondary. The environment is now nonnegotiable, and it’s very clear the environment is as important as safety,” said Epstein. 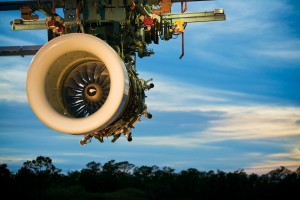 One of the ways Pratt & Whitney is making environmental safety a priority is in the development of its new PurePower PW1000G engine, which uses an innovative geared turbofan the company says will reduce noise, fuel consumption, and CO2 emissions. Jet engines rely on a fan to pull air into a combustion chamber, where it ignites with fuel before it’s pushed through a turbine to create thrust. Fans and turbines perform better at different speeds, but in existing engines the two are connected by a shaft, forcing them to turn at the same speed and significantly reducing the efficiency of both. Pratt & Whitney’s new gearbox allows the fan and turbine to rotate independently at their optimal speeds.

In addition to the gearbox, which required developing a super-efficient and lightweight gear, Pratt & Whitney also developed a larger fan and lightweight ultra-low-drag nacelle, or engine housing, for its PurePower engine. “Any one of those three technologies gives about a 2 percent reduction in fuel burn,” explained Epstein, “but if we have the three technologies together, it doesn’t equal a 6 percent reduction, it equals 15 percent.” The PW1000G engine is in the final stages of initial design with engine certification scheduled in late 2011, supporting the engine’s 2013 entry into use on the Bombardier CSeries and Mitsubishi Regional Jet.

Developing cutting-edge technology to change how an entire industry operates is not a cheap undertaking, but senior management at Pratt & Whitney believe in the investment, which is a big reason why Epstein left his position as a professor at Massachusetts Institute of Technology to join the company.

“These products take a billion or two to develop, and this company had already spent about $250 million over two or three years on research and development, before they even had a customer,” Epstein said. “In engine development, you can spend $2 million every day, and it’s hard to spend it wisely. But if you spend a few thousand a day five years before development, the development goes much more smoothly.”

This practice of long-term research and development is commonly known as technology readiness, a concept NASA developed in the eighties with its technology readiness levels, and Pratt & Whitney continues to follow it by investing in research for future technology that will eventually improve upon and replace innovations currently in development. But first they have to finish developing the geared turbofan and convincing customers this new technology is economically and environmentally beneficial.

“This is the problem with innovation: the customer doesn’t have a backup if ours doesn’t work,” said Epstein. “If we just had a ‘me, too’ engine, our airframe customers could say, ‘All right, we’ll buy your engine and a competitor’s engine, and if yours doesn’t deliver, we’ve got the competitor’s just in case.’ But if we have an innovative concept that looks and operates differently, then the customer has no backup,” he explained. Because of this, customers need a higher level of assurance that the new technology is ready to fly. And the best way to do that is to actually fly it.

“As an engineering professor, I didn’t understand the value of flight tests,” Epstein explained. “We’d done several wind-tunnel and other tests and answered all the engineering questions. What could we learn flying—which is a lot more expensive—that we couldn’t by running a few more hours on a test stand?” A lot, it turns out.

Among other things, PurePower developers discovered that the drag on their larger engine was much less than they expected, and the engines performed better than anticipated under adverse conditions, which Airbus happily tested for itself by maximizing stress to the airplane through a series of windup turns. The flight tests also proved to customers that the technology actually worked. “The same people who were skeptical eighteen months ago now just want to talk about price, not whether this thing will work,” said Epstein. 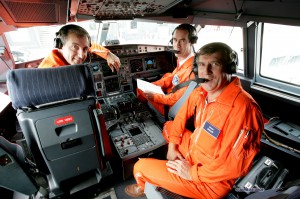 Airbus test engineers conducted a rigorous 27-flight, 100-hour test of the PW1000G engine on an Airbus-owned A340 test aircraft in Toulouse, France, in late 2008. The flights measured performance, acoustics, and operation under high-stress maneuvers and included approximately sixty high-angle airplane maneuvers with up to 2.1 G’s of force.
Photo courtesy Pratt & Whitney

The United States has been a leader in aviation technology, thanks in significant part to research and technical development done by NASA in the seventies. But with less investment going toward aeronautic research, we’re potentially at risk of losing that lead. “NASA and industry aren’t idea or talent limited, we’re resource limited. And you get what you settle for,” said Epstein.

In addition to its advances in aerospace, NASA has played a large role in aeronautic innovation through its X-plane projects and test flights, which have helped convince industry that groundbreaking technology is not only feasible but factual. These NASA aeronautics projects could be pivotal in changing the current airplane configuration, which some say has reached its limit. But without the nation’s investment in research, and NASA’s dedication to creating and flying radically new designs, industry influencers such as Boeing and Airbus likely won’t buy in. A lack of research and proven flight tests results in a lack of customers, which in turn impedes industry innovation.

“I don’t know that U.S. industry has done an adequate job in voicing the value that NASA brings to the nation,” Epstein said. “We’ve been pumping the well in industry using NASA expertise, but the well is pretty dry now. The United States having the lead in aeronautical technology has been true the past five or six decades, but there’s no law that says it has to be true the next five.”

Innovation doesn’t just happen by locking a brilliant engineer in a room and asking him to brainstorm. New ideas require feedback and testing and other new ideas to help make them a reality. Pratt & Whitney’s new gear for the PurePower engine, for example, grew out of an early idea from one of their sister companies in United Technologies, Sikorksy, which specializes in rotorcraft technology. “Now we’re sharing the fundamental science of the gear we developed back with Sikorsky, because the gear science that’s gone into this is just as applicable to rotorcraft and convertible aircraft,” said Epstein.

The United Technologies companies do more than share technology and ideas, however. They also share personnel. “People go back and forth because it’s easy; we’re here and they’re only fifty miles down the road,” Epstein explained. “But it’s also true for divisions out in California. If someone in one division has a technical challenge and someone in another division has deep expertise, you ask if they’d like to go to San Diego.”

United Technologies Research Center has more than 300 scientists and engineers, 96 percent of whom hold advanced degrees, 76 percent of them PhDs. It serves as both an idea generator and incubator and a technical-problem solver for the corporation, delivering technology and innovation that often create product differentiation in the marketplace for the businesses of United Technologies.

That information hub could help progress environmentally friendly aviation further toward what Epstein sees as a plausible future: airplanes you can’t hear that also emit 20 to 30 percent less CO2. “It’s unquestionably possible in the next decade or two that you and I could stand on the street and have a plane fly over that doesn’t interrupt our conversation. The planes will run on biofuels, which will continue to drive down the price of an airline ticket,” he said. “I wouldn’t mind having more leg room, either.”