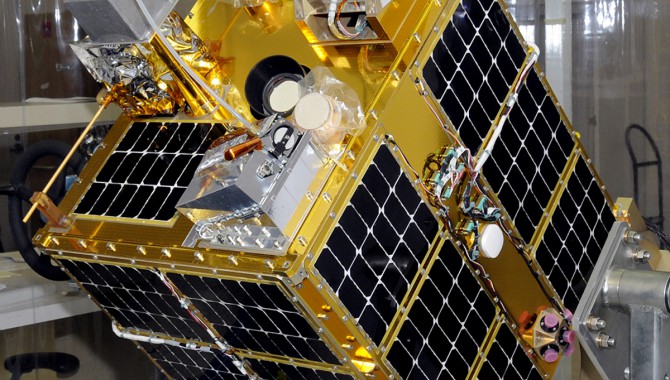 “Fast” is the word that best describes Tom Simon’s experience working at Marshall Space Flight Center on the Fast, Affordable, Science and Technology Satellite (FASTSAT), a microsatellite designed to carry six small experiments into space. Having served as a Space Shuttle subsystem engineer and a research and development project chief engineer at Johnson Space Center since 2001, Simon went to a spaceflight project where the whole team could stand around the satellite. Working on a small team with a quick schedule, Simon saw nearly every major production phase while assisting the project’s chief engineer in the fabrication and testing of the spacecraft. 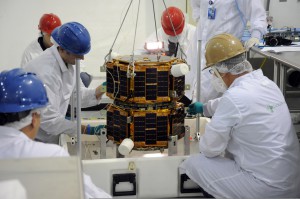 Simon came to FASTSAT as a participant in the Systems Engineering Leadership Development Program (SELDP), which provides opportunities for a small class of high-potential candidates to develop and improve their systems engineering leadership skills and technical capabilities. A core feature of the program is a hands-on developmental assignment away from a participant’s home center in a work context that differs significantly from his or her past experience. In Simon’s case, FASTSAT fit the bill.

The objective of the FASTSAT project was to demonstrate the capability to design, build, and test a satellite platform that would allow researchers from government, academia, and industry to conduct low-cost scientific and technology experiments on an autonomous satellite in space. The project was in itself an experiment in lean, affordable development.

FASTSAT is intended as a multigeneration effort with future launches of the satellite bus with different experiments on board. The first FASTSAT was called HSV-01 (Huntsville-01) and had a mass of approximately 100 kg. (Future FASTSAT satellites can now be produced by NASA’s partner, Dynetics.) HSV-01 was launched as a piggyback payload on an Air Force Space Test Program launch vehicle. HSV-01’s payloads included Marshall’s NanoSail-D, the first-ever solar sail of its size to unfurl in low-Earth orbit. From Simon’s perspective, the team learned a lot carrying out the project at a manned spaceflight center.

The difference in scale from the Space Shuttle program Simon had worked on for four years changed his approach to learning. “If I had a question about how we mate to the launch vehicle with the satellite, I knew exactly who to talk to,” he said. “The family size of the project allowed the advantages of a co-located R&D [research and development] effort even when we applied it to the development of a spacecraft.”

FASTSAT also operated completely differently from the systems he’d encountered earlier in his career. “There were almost no moving parts, and no fluid systems,” said Simon, whose previous experience included working on the shuttle’s power-reactant storage and distribution system, which stores and supplies the liquid oxygen and liquid hydrogen for the shuttle fuel cells and crew breathing, and R&D systems to produce propellants on other planets. “My rotation had me focusing now on software and electrical engineering, which meant being outside my comfort zone and learning a lot,” he explained. He found himself troubleshooting electrical problems and software bugs. “The day-to-day work was in completely different technical disciplines, which forced me to grow.”

As the new kid on the block, Simon found that his colleagues were glad to help him get up to speed. “Even though I wasn’t coming in on the same page that they were on, I tried to make it very clear that I cared about the success of the program,” he said. “As long as that connection is made, folks don’t mind helping you catch up—especially if they see you as someone who can help them, too.”

The schedule also represented a new way of working for Simon. FASTSAT had a twelve-month project life cycle. Processes were streamlined to where decisions were made in hours, not weeks. “Most of the projects that I’ve worked on I’ve had intended launch dates a few or several years away,” said Simon. The FASTSAT team charged hard, from a kickoff meeting in January 2009 to an assembled, fully loaded satellite nine months later. 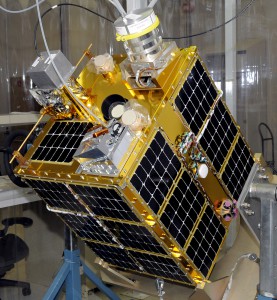 One of FASTSAT’s mission objectives is to demonstrate its ability to eject a nanosatellite from a microsatellite while avoiding re-contact with the FASTSAT satellite bus.
Photo Credit: NASA Marshall Space Flight Center/Doug Stoffer

Working under such a fast-paced schedule shifted his approach to projects. “Every project I join now, I’m going to start with [the perspective of], ‘What do we need to do?’ and not necessarily, ‘What have we always done?’” he said. “I’ll never be the same again.”

To keep pace with the schedule, testing took place nearly every day. “We had to basically get to the test phase earlier than any of us usually get to it, and let the data speak for itself,” Simon said. During the thermal-vacuum test, the team was reviewing the output signal from the flight transceiver and noticed a discrepancy that likely would have led to a failure. “One thing I learned from this project is that even if you’re trying to do things affordably and quickly, you don’t skip these meat-and-potatoes tests,” he said. “We could have spent six months analyzing the system, and we never would have found the transceiver issue. Instead, in a few days of testing, we found it.”

As the project wrapped up and awaited launch, Simon drafted a lessons-learned document for the team: “I tried to keep it very concise. What was the issue? What did you do to fix it? How did it turn out? And it included a contact name to find out more. Rather than turning it into a giant bound book, I wanted to keep it fairly short.” He also organized the lessons by disciplines such as project management and systems engineering to make it user-friendly for readers.

Simon saw the lessons-learned document as a resource for future work at NASA’s manned spaceflight centers. “Once the shuttle is retired and the station is complete, there are going to be a lot of people working on systems that need to be approached differently than the way we’ve worked in the past,” he said. Many of the lessons he captured went directly into the draft systems engineering management plan he wrote for potential future FASTSAT satellites, such as HSV-02. “Until you’ve gone through a build like that,” he said, “it would be impossible to predict all the lessons up front.”

Working on FASTSAT—a robotic, non-human satellite—helped Simon fill a gap in his experience between working on the shuttle and R&D work earlier in his career in a lab setting. “I don’t think they [the SELDP team] could have picked a better assignment, team, or organization for me,” he said. “If the first ten years are any sign, I’ll be learning every day until I retire.”