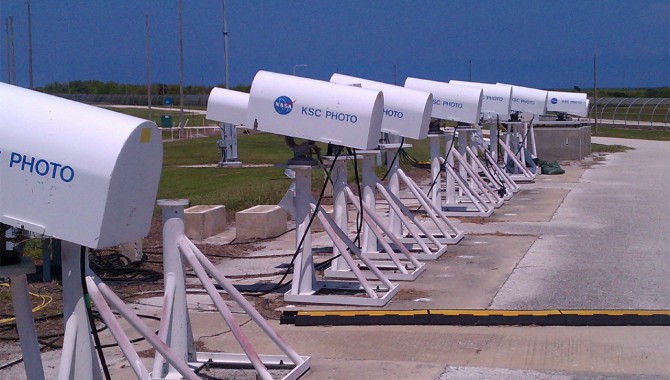 Cameras inside of explosion-proof enclosures near Launch Pad 39-A . Photo Credit: NASA APPEL

A team of thirty-five trackers worked together to provide the photographic story of a space shuttle launch. 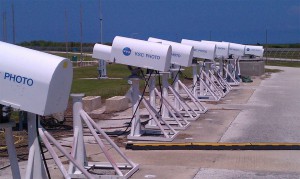 Cameras inside of explosion-proof enclosures near Launch Pad 39-A .
Photo Credit: NASA APPEL

When a piece of foam the size of a briefcase hit the leading edge ofColumbia’s left wing 81.7 seconds into the launch of STS-107 on January 16, 2003, no one saw. It wasn’t until the following day that images from cameras on the ground revealed the strike and triggered a series of conversations about what to do. The story of Columbia is just one example of the impact that imagery can have. Getting the right image is a story in itself.

Approximately 400 ground-based cameras recorded every shuttle launch after Columbia, an increase from previous missions that was recommended by the Columbia Accident Investigation Board Report. The report identified other upgrades to Kennedy Space Center’s ground camera ascent imagery assets such as obtaining higher quality optics and higher image resolution. For each shuttle launch these assets were precisely calibrated to capture the data needed to make decisions about the progression of the mission.

Most stories about shuttle launch photography focus on the cameras and the massive tracking equipment. As with all NASA projects, though, it is the people behind the cameras and machines who make the visual story of a launch come to life. 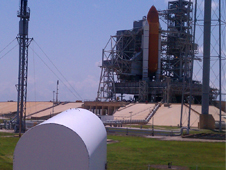 Camera inside of an explosion-proof enclosure pointed towards Endeavour one week before it launched on STS-134.
Photo Credit: NASA APPEL

“Want to hear 400 frames per second?” asked Adam Nehr, instrumentation specialist. He flipped a switch and the camera chugged its way through a full magazine of film in less than a minute. The camera resembled many others sitting in a storage room across the hall. Inside there are rows of racks containing cameras, film, and tripods and at least one cabinet dedicated to the famous Hasselblad cameras used to capture lunar imagery during the Apollo Program. “This is what we have in terms of the smaller equipment,” said Mark Olszewski, photo and media services manager. “These are the little toys.”

The Photo and Media Services Center is home to a team of 35 men and women dedicated to seeing the shuttle launch story unfold amid the chaos of fire, gas, and debris during launch. Some took a winding path through various technical school curricula, while others transitioned to NASA from jobs ranging from shooting high-speed commercial imagery for locomotive companies to photographing autopsies.

“All of us here are construction technicians, welders, [or] machinists who are able to fabricate all kinds of stuff,” said Nehr. “We can make anything in metal, wood, plastic.” The team can design, build, and repair optical equipment as well as maintain and calibrate high-speed motion picture equipment. The team prepped the cameras (the film was installed by feel in total darkness) and placed them in explosion-proof boxes around the pad.” Generally accustomed to flying below the radar and getting the job done right, “we become pretty important 11 milliseconds after something goes wrong,” said Nehr.

Each camera for a launch has a specific job to do. For shuttle, there were hydrogen burnout cameras on the launch pad to capture the diamond shockwave that comes out of the engines. There were cameras inside the Tail Service Mast (TSM) recorded the human-sized carrier plates as they were pulled back and shut into the TSM enclosure. There were cameras set up to capture the gimballing and ignition of the engines, the release of the explosive bolts holding the shuttle up, and to record the movement of the twang. “There’s a camera for every mechanical function that we need to quantify,” said Nehr.

Each camera is prepared according to the type of image it will capture. “We need to set up our equipment to acquire that image precisely,” said Nehr. Specific calculations for each camera are documented in the Photographic Acquisition Disposition Document (PADD). Derived from the Program Requirements Document for the shuttle, the PADD defines the imagery requirements according to what the imagery analysis team needs to do its job after a vehicle launches.

“The PADD specifies what the intent of the image is,” explained Nehr. Shutter angle, shutter speed, and frame rate, are calculated for every single camera, in addition to the shuttle’s path and gas velocities so that the photographers know how fast something might be moving through a frame. “They have to be calculated so that any credible event that we would see is kept sharp,” explained Olszewski. A blur streaking through an image can render it useless. 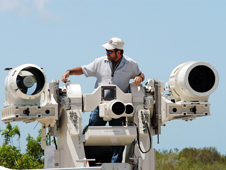 There were cameras calibrated for short-, mid-, and long-range imagery. Some sat on the pad, next to the pad, around the perimeter of the pad, or even many miles away. Perhaps the best-known cameras sat on a tracking device called a Kineto Tracking Mount (KTM). It looks like something straight out of a Star Wars film. One side of the KTM carried a film camera packing 1,000 feet of film, and the other housed a HD-quality video camera. A manned tracker used a spherical joystick to follow the shuttle skyward. Unmanned KTMs were remotely controlled and sat as close as two miles from the pad.

For every shuttle launch, a total of 14 KTMs were deployed to stations from Cocoa Beach to Daytona. “We set them up here in the hanger, put all of the cameras and lenses on them, make sure they’re balanced and everything works just right, and then we tow them out to the field,” Ken Allen, chief electronic technician, who has been with the team for over 23 years.

Allen started his career with NASA working telemetry for STS-1 on an island in the Caribbean. He later transferred to KSC during the days of the KTM predecessor, a tracking mount called the Intermediate Focal Length Optical Tracker (IFLOT), which used World War II anti-aircraft gun mounts retrofitted with cameras instead of artillery. They have been used to capture imagery for launches from the late 1950s to shuttle. Not quite fast enough to track the faster rockets of today, NASA started using KTMs, which were more capable, in conjunction with the IFLOTs in the late 1980s.

“I actually took these (the KTMs) off the truck when they showed up,” said Allen. The KTMs were computer controlled and modern and Allen took to them immediately. “The old-timers that were here back then didn’t want anything to do with them,” he laughed. “That’s how I ended up in this section. I knew the electronics and could take care of them.”

Not Your Average Photostream 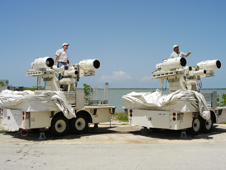 Operators Rick Wetherington (left) and Kenny Allen work on two of the Contraves-Goerz Kineto Tracking Mounts (KTM). There are 10 KTMs certified for use on the Eastern Range. The KTM, which is trailer-mounted with a center console/seat and electric drive tracking mount, includes a two-camera, camera control unit that will be used during launches. The KTM is designed for remotely controlled operations and offers a combination of film, shuttered and high-speed digital video, and FLIR cameras configured with 20-inch to 150-inch focal length lenses. The KTMs are generally placed in the field and checked out the day before a launch and manned 3 hours prior to liftoff.
Photo Credit: NASA

Just before rollback of the Rotating Servicing Structure, Nehr would carry a heavy bag of equipment up to the shuttle stack. He meticulously photographed the tiles and the forward reaction control system, documenting everything he saw. Of the 2,000 plus images he took, bird droppings were a common item he took care to note. “To the laser range finder on the end of the robotic arm they used for tile inspection [in space], bird droppings look exactly like tile damage,” Nehr explained. Tile damage can be cause for a spacewalk, an unwanted risk and waste of valuable time if the tiles aren’t really compromised. “I’ve had thousands of published pictures,” said Nehr, “but I tell people some of the most important pictures I’ve ever taken are of bird poo.”

Another set of photographs he was responsible for were of tiny pieces of tape placed where the external tank connected to the belly of the shuttle. Once the tank was jettisoned, the doors closed in a specific way. “We position the tape so that it shows just a little bit [when this happens],” he explained. “When we examine the photographs, if there’s more tape showing than there should be, we know the doors didn’t shut properly.”

After a launch, the team put together what is called a ‘quick review’ or ‘quick video’ within an hour or two after liftoff. This is the HD video of the launch that is sent to the image analysis team called the Intercenter Photo Working Group. “While that’s happening we’re gathering film from each of the cameras and getting it together to have it processed.” They had approximately twenty-four hours to deliver.

Being able to answer the simple question “Did you see that?” is important to mission success. From the camera boxes that were embedded into the Apollo launch ring stands to the place where periscopes used to peer out of bunkers to watch Mercury spacecraft launch (“That’s how they watched it back then in the days before easily usable video cameras,” explained Nehr.), being able to actually see what’s happening during liftoff is critical.

“A picture is worth a thousand words,” said Olszewski. “It’s that simple. Try to describe it verbally or try to write it down exactly as you’ve seen, it takes too much time. Sometimes you don’t have the right words. Sometimes you know how to describe it. But if you take an image, you’re looking at it. You don’t have another person’s perception of what they thought they saw.”

When an anomaly or a failure occurs, often it happens so fast that the human eye misses it, perception distorts it, and memory fades. Said Nehr. “The only thing you’ve got left is imagery.”