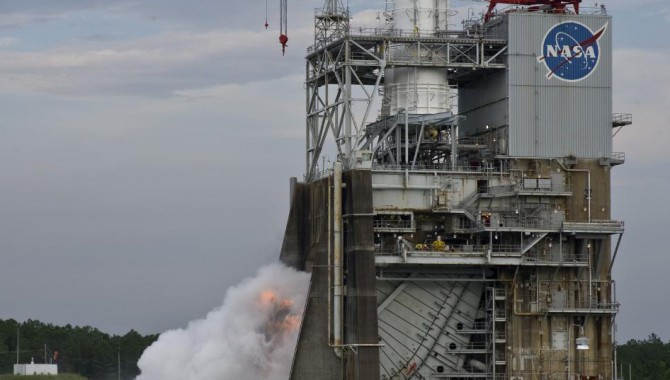 A 1.9-second ignition test of the J-2X rocket engine is conducted on the A-2 Test Stand at NASA's Stennis Space Center. Photo Credit: NASA/SSC 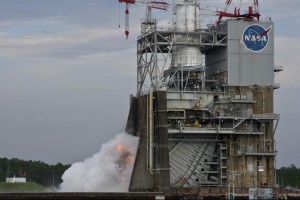 A 1.9-second ignition test of the J-2X rocket engine is conducted on the A-2 Test Stand at NASA’s Stennis Space Center.
Photo Credit: NASA/SSC

“Anytime we test an engine out here I think it’s cool,” said Jennifer Franzo. “Fire, smoke, even the science behind testing the engine is cool.” Franzo, who just took part in a recent test in July on a J-2X engine, is a systems safety engineer at Stennis Space Center (SSC). Originally from Hattiesburg, Mississippi, Franzo works on fault tree and hazard analysis for the facilities at Stennis and the tests they will be used for.

“We look at any possible way that any failure could occur that would cause loss of mission or data, damage to the facility or test article, or injury to personnel.” She looks at different types of failures and their causes. They range from a valve malfunction to an explosion to human error. With her team, she generates a hazard report for a particular test. “We come up with the controls and the verifications based on the requirements for the different causes and then rank those risks,” she explained.

Now a mother of two (she just had her second child in August), Franzo was influenced by her career-oriented mother who instilled in her the determination to balance both work and family. “I have a wonderful support system,” she said, referring to the support her husband and family provide her. “I never had a doubt in my mind that I could have kids, work full-time, and have a good job.”

Immediately after graduating from Mississippi State University, Franzo got a job at Michoud Assembly Facility with Lockheed Martin. “I came fresh out of school with this aerospace degree, didn’t know what I was doing,” said Franzo. Starting in 2007, her job was working on the External Tank. “That’s all I wanted to do. I didn’t really know what I was going to be doing, but I would be working on the shuttle program. That’s what mattered.”

Her supervisor and eventual mentor, Greg Lain, Senior Manager of Safety and Health, put her right into the deep end. Any angst or anxiety about working at NASA was quelled by one simple act. “He (Greg) believed in me,” said Franzo. “That was one of the big things for me. He took me under his wing, showed me around, talked to me,” said Franzo. “And then threw me to the wolves,” she laughed. 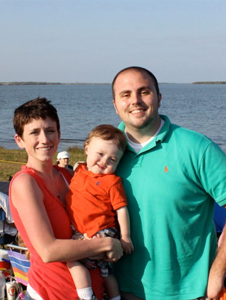 Assigned to work on the Thermal Protection System Report (TPS), Franzo knew the gravity her assignment had on the program. “The Loss of ET Thermal Protection System” report is revised and edited after every flight of shuttle, Franzo explained. All inflight anomalies for the External Tanks were documented in the report and could potentially change the risk profile. After Columbia in 2003, these TPS reports increased in visibility.

“When I was given that report, Greg said, ‘Here you go, you can do it. I have complete faith in you.’ I remember thinking, ‘This is a big thing. Don’t you have a smaller one that you can give me? I don’t know what I’m doing yet.’ But he had complete faith in me and guided me.”

During a recent opportunity to participate in a Masters Forum in Melbourne, FL, Franzo had the opportunity to hear the stories of seasoned practitioners from around the world about their experiences working on previous programs. “I enjoyed listening to the people who had been there from the very beginning of shuttle,” said Franzo. In particular, she found the stories about transitioning from Apollo to shuttle particularly interesting.

“People see the end of the shuttle program and they say, ‘What are you going to do now?’” said Franzo. She often finds it hard to communicate to her family and friends what is happening during this time of transition. “You know things are happening. You know we’re moving towards something, but we don’t have a clear defined direction yet,” she said. “It’s the end of [the shuttle] program, but it’s not the end of human spaceflight.”

Stennis is the smallest NASA center. With roughly 250 civil servants onsite, Franzo sees the center’s size as an advantage to her development goals. “You have no choice but to work with upper management because you’re probably the only one who does the job that you do,” she explained. “They know who you are and you know who they are. It allows you to get that face time, that one-on-one time.”

Franzo’s direct lead and mentor, Amy Rice, safety engineer for SMA, has been instrumental in her career development. “She has helped me mold myself into being more than just a systems safety engineer working on hazard analysis, which is what I came out here to start doing. My group here has given me the opportunity to expand and do other things.”

When she finds a class or training relevant to her career development, her department is supportive of its people learning as much as they can. She has been involved in STEP, a program sponsored by the NASA Safety Center, which allows engineers to gain added depth in their field. “You can choose whether you want to go into systems safety, quality, or reliability assurance.” Franzo is also the point of contact for the Incident Reporting Information System (IRIS), an agency-wide reporting system that is used any time there is a mishap (e.g. explosion, fire, or someone gets injured). 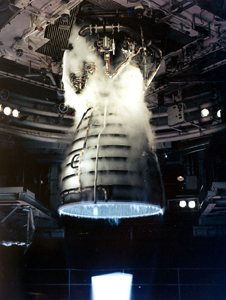 One of her most memorable opportunities came about during STS-134. She was asked to sit in for her SMA director as the safety point of contact in the Launch Control Center at Kennedy Space Center. “It was always one of those things that would be so cool if you ever got the opportunity to do and how could you ever pass it up,” she said. “It’s just one of those things that makes you smile.”

Networking the Next Generation

During the Masters Forum in Florida, Franzo had the opportunity to connect with other young professionals around the agency. “It made me feel like I’m not the only young person sitting here,” Franzo explained. “It opened my eyes that there are a lot of young people who share my passion.” Formerly part of a young professionals group at Lockheed dedicated to professional development, Franzo is looking to catalyze a similar movement at Stennis. She sees the importance of connecting with her peers at her center and around the agency.

“Everybody should have an opportunity to go see every NASA center they can because each one of them has something different to offer,” she said. She has visited Johnson, Kennedy, and Marshall, which has helped her to see the bigger picture. “They all put the story together perfectly. From one center to the next you can actually see how all of the puzzle pieces fit together to make NASA what it is.”

In addition to experiencing the culture each center offers, Franzo also believes that the next generation will unify under a common mission. “We are all engineers deep down. We need some sort of documentation that we are moving in a direction,” she said. Talk is one thing, but to see things actually happening makes it real, makes it powerful. “I think there are a lot of young professionals who are willing to wait for a little while, but to keep us moving forward, we need to see things coming to fruition. We can’t wait around forever.”