Back to Top
Home/ASK the Academy/Volume 4/4.7/This Month in NASA: History Mars Observer Lost 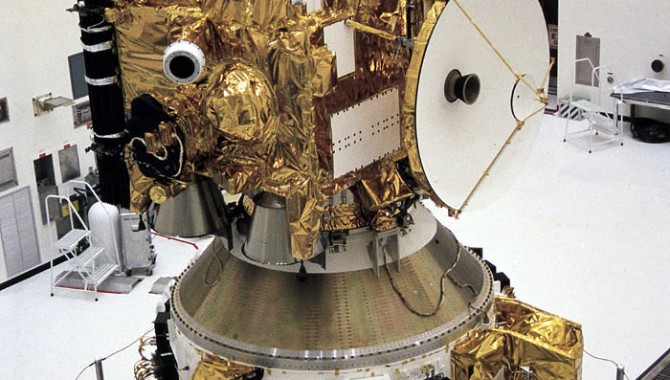 In the Payload Hazardous Servicing Facility, the integrated Mars Observer/Transfer Orbit Stage (TOS) payload is ready for encapsulation in the Titan III nose fairing. The TOS booster maiden flight was dedicated to Thomas O. Paine, a former NASA administrator who strongly supported interplanetary exploration and was an early backer of the TOS program. Photo Credit: NASA/MSFC

No physical evidence, no telemetry data. To solve what happened to the Mars Observer after it disappeared, the Mishap Investigation Board had to take a different approach. 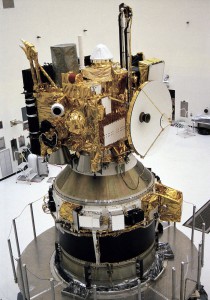 In the Payload Hazardous Servicing Facility, the integrated Mars Observer/Transfer Orbit Stage (TOS) payload is ready for encapsulation in the Titan III nose fairing. The TOS booster maiden flight was dedicated to Thomas O. Paine, a former NASA administrator who strongly supported interplanetary exploration and was an early backer of the TOS program.
Photo Credit: NASA/MSFC

Mars Observer was going to provide the most detailed data about Mars since the Viking missions. Launched on September 25, 1992, its yearlong journey was largely unremarkable until eleven months later, when Jet Propulsion Laboratory (JPL) controllers lost contact with the spacecraft.

After a week of trying to make contact, NASA Administrator Dan Goldin requested the formation of a mishap investigation board to determine what went wrong. The board officially began its investigation on September 10, with representatives from NASA, National Oceanic and Atmospheric Administration (NOAA), Air Force Phillips Laboratory (AFPL), Naval Research Laboratory (NRL), and the Defense Meteorological Satellite Program (DMSP).

The spacecraft, which had the dimensions of an oversized refrigerator (2.1 x 1.5 x 1.1m), carried a deployable high-gain antenna, a magnetometer, gamma-ray spectrometer, and thermal emission spectrometer. Approved for fiscal year 1985 as a low-risk, well-bounded, first-of-a-series science project, the mission underwent an eventful eight-year development period. The loss of Challenger in 1986 led to a decision to launch from a Titan III instead of the shuttle. Funding was cut, all follow-on missions were cancelled, and the complexity of the science instruments increased. The Jet Propulsion Laboratory managed the program, including contracting with Martin Marietta Astro Space to build and test the spacecraft bus, acquire the instruments, and conduct flight operations.

On August 21, 1993, flight controllers lost contact with Mars Observer as it initiated its fuel tank pressurization sequence. These procedures take place prior to orbit insertion, when the spacecraft lights up its engines to perform the necessary maneuvers. While pressurizing the tanks, the spacecraft’s radio frequency transmitter is powered down to protect it from possible damage. For a total of fourteen minutes the controllers are without telemetry data until the transmitter powers back on. When Mars Observer’s fourteen-minute window passed, telemetry never resumed. The mishap board was charged with finding out why. 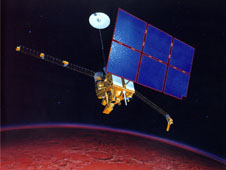 The board eliminated any scenarios that might have involved communications failure from spacecraft to ground via the NASA Deep Space Network. Whatever happened, the board determined, it must be a failure capable of losing the downlink signal permanently. Second, the failure was most likely associated with the pressurization of the propulsion system (rather than a random occurrence) and must not have taken longer than 14 minutes to occur. The board focused on the commands, actions, and software involved with the pressurization sequence as a source of the failure. It broke into groups by systems (e.g. electrical power, mechanical, command and data handling, etc.) and studied their performance characteristics.

After a significant effort to piece together what caused the loss of downlink, the board was unable to find a “smoking gun.” Of the most likely scenarios, the most probable cause was a massive, and eventually catastrophic, failure of the pressurization side of the propulsion system. It is possible, the report explains, that an unintended mixing of segregated fuels, nitrogen tetroxide (NTO) and monomethyl hydrazine (MMH), in the titanium tubing on the pressurization side of the propulsion system occurred. Mixing these two fuels would result in a combustible reaction. Based on data gathered by JPL, “…significant NTO migration through the check valves during the eleven-month cruise phase from Earth to Mars…” could have occurred and led to the failure.

A total of 59 scenarios were examined. Outside of the immediate failure on the spacecraft, the board concluded that the general design of the spacecraft was sound and capable of accomplishing its mission. They also found several failures on the part of the organization and the procedures used to develop the spacecraft, including an overreliance on heritage hardware, software, and procedures derived from missions fundamentally different than Mars Observer. The board also cited a failure to effectively use the complementary strengths of JPL and Martin Marietta.

The conclusions drawn by the board were unable to aid in recovering the spacecraft. One month after the initial loss of the downlink, controllers officially concluded scheduled operations on October 29, 1993. The Mars Observer has not been heard from since.

Read more about the other possible failure scenarios for the Mars Observer in the Mishap Investigation Board Report. (PDF)