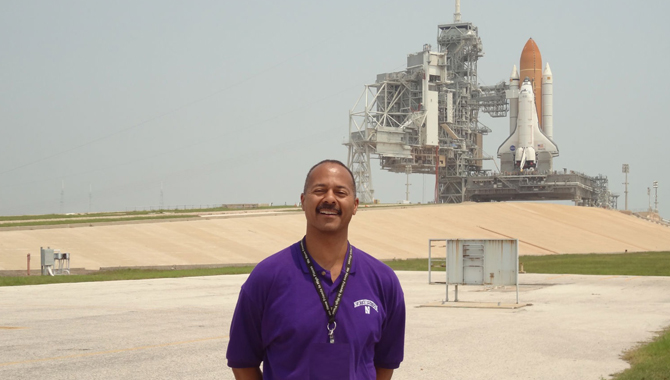 Kennedy Space Center’s Michael Bell talks about the state of knowledge at his center.

This is the first in a series of interviews that ASK the Academy is conducting with chief knowledge officers at NASA’s centers and mission directorates. Michael Bell was recently appointed the Chief Knowledge Officer of Kennedy Space Center (KSC). He has also served as program manager of the agency’s lessons learned program, and as center data manager for KSC.

Michael Bell: I think within Kennedy, probably all the centers, it is just awareness of the various tools and activities. There are so many things going on and people at KSC have been mission focused—I don’t know if other centers are different—but we’re focused on getting our own work done. I am not going to say we’re siloed, we’re just focused on what our individual or group task is—if it is facility type stuff, or if it is accounting, or if it is this mission that is going to be launched.  So having people understand what’s going on across center is a big challenge because people are probably naturally taught to tune other stuff out. I think that is why KSC’s Innovation Day is very important in getting to see what else is going on at our own center. And knowing those things can help spark ideas that you can use in your own area.

ATA: Can you tell us about any successful knowledge efforts in your organization that you would like to highlight?

Bell: One of the things that I will point to is the Kennedy Engineering Academy. It is useful to more than just the engineering community. Periodically, we have these forums in the training auditorium where everyone across the center is invited and contractors from the various companies who are out here come as well. If it is related to an activity or a specific lab, definitely you tend to get more of the people who work in that lab or work on that contract. But then other people who are just curious, or maybe have a little time on their hands can go and learn about that. I’m happy that this is still going on and it still has a high level of interest and people are able to attend.

ATA: Are there knowledge management efforts, even within NASA or other organizations that you find particularly remarkable or innovative?

Bell: I like the case study activities. I don’t know if I can call it innovative, but I think it is just another avenue for sharing knowledge and it is on a different level. It is more of an intimate activity for people to learn and to discuss and to provide feedback. We don’t have as much intimate knowledge transfer formalized in case study activity as I think we should have at KSC.

ATA: What is the biggest misunderstanding you think people have about knowledge?

Bell: I think the biggest misunderstanding is that were doing a lot of it and when they hear the term “lessons learned” or “knowledge management,” I think most people have a very limited idea of what that that means. So they limit their thinking when they are doing video conferences, they’re collaborating across centers, or they’re doing a Google search.  A lot of people don’t realize when they do a Google search, they can actually hit things inside the NASA lessons learned system. They don’t realize we have resources like our KSC library and librarians that will do searches for stuff that is going on in other organizations and directorates, which could be useful. So maybe even the opposite is true. If there is stuff that they could be sharing or someone could use that they might not realize, it could help spur innovation and new thoughts on solving a problem.

Michael Bell, KSC Chief Knowledge Officer, standing in front of Atlantis before her last launch, STS-135, and the last mission of the Space Shuttle Program.