Back to Top
Home/APPEL News/This Month in NASA History: Skylab Down 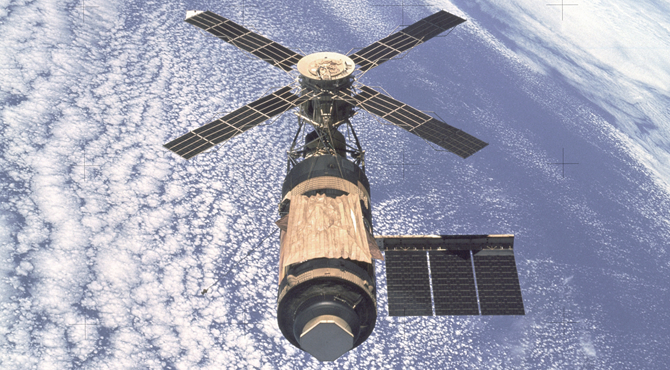 What goes up must come down. This adage rang true for the Russian Mir space station when it deorbited in 2001, and it will be true for the International Space Station (ISS) in the future. NASA’s first experience with the disposal of a space station came In the 1970s, when planning for the return of Skylab, an orbiting laboratory the size of a Dutch windmill.

Launched on May 14, 1973, Skylab served three crewed missions, laying the groundwork for future microgravity research programs such as the ISS. The first Skylab crew launched on May 25, 1973, spending a total of 28 days in space. One month after its return, the Skylab II crew spent 59 days on board the laboratory. The third and final crew launched in November 1973, spending 84 days in space, and ended their mission by buttoning up the observatory, putting it in a proper altitude, and shutting it down before departing on February 8, 1974.

NASA studied possible ways the agency might perform a controlled deorbit of the now empty and out-of-use space station. If the Space Shuttle Program progressed on time and schedule, there was a chance to prolong Skylab’s orbit or deorbit using a teleoperator retrieval system, developed by Marshall Space Flight Center in 1977. But there was no guarantee Skylab would still be in orbit by the time the system was ready—it was falling faster than expected.

In December 1978, NASA realized it was no longer feasible to save the $2.5-billion orbiting laboratory. Instead of a graceful return home, Skylab would meet a fiery end. NASA Administrator Robert Frosch informed the President Carter that the agency would do everything it could to minimize any damage the laboratory might cause to populated areas upon reentry.

Early calculations estimated Skylab would reenter Earth’s atmosphere in early 1983. Subsequent analysis led engineers to move the date up to October 1979. This drastic change made Skylab’s fate a newsworthy issue. There was also uncertainty about where the debris might fall, making it a ripe topic for speculation. Two Washington-based computer scientists started an organization called Chicken Little Associates, which provided updates about Skylab’s reentry for a fee. Concerns continued to mount in January 1978 when an unmanned, nuclear-fueled Russian spacecraft crash-landed in northern Canada. If the 3,800-kg Cosmos 954 spacecraft caused such a stir, what would a 75,000-kg Skylab do?

On July 11, 1979, Skylab did reenter the Earth’s atmosphere, crashing into a sparsely populated area around 1:00 p.m. Eastern just outside of Perth, Australia. It was fiery and spectacular, and no harm was reported to any residents or property in the area.

Learn more about the Skylab Program.

An overhead view of the Skylab Orbital Workshop in Earth orbit as photographed from the Skylab 4 Command and Service Modules (CSM) during the final fly-around by the CSM before returning home. The space station is contrasted against the pale blue Earth.