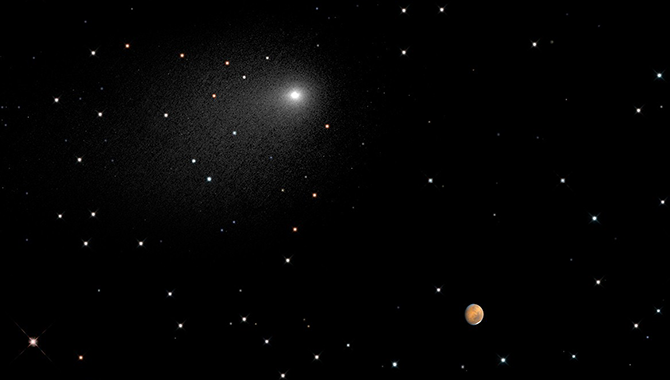 On Oct 19, comet Siding Spring flew past Mars, giving instruments on spacecraft from NASA and the European Space Agency (ESA) the opportunity to observe and examine an Oort Cloud comet for the first time ever. Siding Spring passed within 87,000 miles of Mars, less than half the distance between Earth and its moon, and much closer than any comet has ever come to Earth.

“We believe this type of event occurs once every eight million years or so,” said Jim Green, director of NASA’s Planetary Science Division, at a recent discussion of the scientific findings from the comet flyby.

The Oort Cloud is a region at the far edge of the solar system, as far as 50,000 astronomical units (AU)—or one light year—from the sun. The region is filled with icy objects thought to be more than four billion years old, leftovers from the formation of the solar system. Occasionally, the orbit of one of these objects is disrupted, forcing it into the inner solar system. Called “long-period comets,” these objects can take thousands of years to circle the sun.

NASA has known since Siding Spring was discovered in 2013 that there could be an opportunity for spacecraft near Mars to observe the rare event. As it turned out, two NASA spacecraft were in the vicinity: Mars Atmosphere and Volatile Evolution (MAVEN) and Mars Reconnaissance Orbiter (MRO). In addition, ESA’s Mars Express and a Mars Orbiter from the Indian Space Research Organisation (ISRO) were present.

While the potential for scientific discovery was exciting, the risk to the spacecraft was just as significant. “Comet Siding Spring…surprised us,” said Green. “We had modeled the comet dust environment extensively, and we didn’t believe that it would cause any problems with the operations of our Mars spacecraft.” However, NASA and the other space agencies decided to alter the trajectories of their spacecraft to take shelter behind the red planet during the event. “[A]fter observing…how the comet dust slammed into the upper atmosphere, it makes me very happy that we decided to put our spacecraft on the other side of Mars at the peak of the dust tail passage and out of harm’s way. I really believe that hiding them like that saved them.”

Sheltered from the trail of debris, instruments on the spacecraft began collecting data about the fundamental makeup of the comet and its effects on the atmosphere of Mars. They were able to directly sample the dust of an Oort Cloud comet, which has never been done before.

“The comet’s dust slammed into the upper atmosphere, creating a massive and dense ionospheric layer and literally changed the chemistry of the upper atmosphere,” said Green. In addition to adding a new layer of ions to the Mars atmosphere, the speeding comet—which traveled at 35 miles per second—produced what Nick Schneider, instrument lead for MAVEN’s Imaging Ultraviolet Spectrograph, described as either a meteor shower or a meteor storm. “There probably were thousands of shooting stars per hour,” he said. “It’s extremely rare in human history. It would have been truly stunning to the human eye.” Altogether, instruments on MAVEN detected eight different types of metal ions in the comet dust: sodium, magnesium, potassium, chromium, manganese, iron, nickel, and zinc.

Although the comet eventually left Mars far behind, its impact could have long-standing effects on the planet. When its dust crashed into the atmosphere, it produced vaporized metals. Eventually these metals will revert to dust in a process known as meteoric smoke. The introduction of all of this new dust into the Mars atmosphere may produce high-altitude clouds above the planet’s surface and could affect its interaction with sunlight. Furthermore, the chemistry of the atmosphere might be permanently altered.

The interest in examining the properties of the comet dust doesn’t end with its effects on Mars. “We believe that comets were formed very early, much earlier than the earth was,” said Green. Studying Siding Spring may offer unique insight into the content of the collapsing cloud that formed the solar system.

Learn more about comet Siding Spring and its Mars flyby in this video.

Watch this video for more information about why NASA spacecraft needed to shelter behind Mars during the comet flyby.