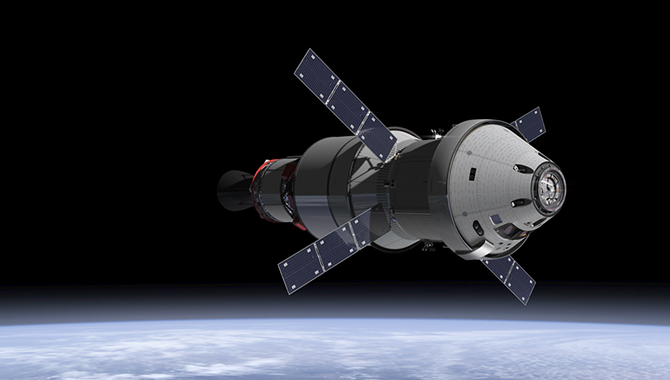 Artist’s concept of the Orion service module and crew module in flight.

As Orion readies for Exploration Flight Test-1 (EFT-1) in December, it looks forward to a future fueled by international collaboration.

Over the decades, NASA has formed strong partnerships with international space agencies to facilitate advances in human space exploration. In the 1970s, the agency signed an agreement with the European Space Agency (ESA) to develop Spacelab, a reusable manned on-orbit laboratory. The same spirit of international cooperation continues today with the work done on the International Space Station (ISS), and was reaffirmed by NASA Administrator Charlie Bolden last month in a speech to the Royal Aeronautical Society. “As I have said many times, the success of our modern space programs will be judged in large part on how well we continue to make space exploration about global partnership—particularly since it is clear that no one nation can do it alone and that the benefits to be gained are for all of humanity.”

That NASA is turning to ESA to develop the service module for Orion, the agency’s first spacecraft designed to enable human spaceflight beyond low Earth orbit (LEO) since the Apollo Program, underscores the seriousness of this commitment. Bill Gerstenmaier, NASA Associate Administrator for Human Exploration and Operations, explained that the strong relationship established over the course of working on the ISS is the foundation for this decision concerning Orion. “[The] trust that came between our European partners and our NASA teams allowed us to go ahead and put together this service module agreement,” he said when the arrangement was formalized in 2013.

Thomas Reiter, ESA Director of Human Spaceflight and Operations, described the partnership between NASA and ESA on Orion by saying, “We are opening a new page in transatlantic cooperation.” Development of the service module will serve to fulfill ESA’s financial obligations toward ISS operations.

The service module is a critical component of Orion. It supports the crew module, providing power, thermal, and propulsion systems as well as water and oxygen. ESA’s module completed the Preliminary Design Review earlier this year. The next milestone, the Critical Design Review, is scheduled for late 2015. The design is based on the technology in Europe’s Automated Transfer Vehicles (ATV), a series of unmanned cargo vessels used to support the ISS. Just last week, a European ATV was integral in performing an emergency maneuver that removed the ISS from the path of potentially harmful orbital debris.

In addition to ESA, the initiative includes the UK Space Agency. “We are grateful for the strong collaboration between NASA, the UK Space Agency, and European Space Agency in human spaceflight, our exploration of Mars, and many other planetary and Earth science missions. [Our] countries understand that space exploration is important for every nation on Earth and can only be achieved through international cooperation,” Bolden said.

The initial flight test for Orion will not include the European service module. On December 4, Orion will launch for the first time on a 4.5-hour flight that will take it 3,600 miles above the Earth. The flight, EFT-1, is a test of critical Orion systems that will one day support manned missions to deep space destinations such as an asteroid or Mars.

The second flight for Orion, Exploration Mission-1 (EM-1), will incorporate the ESA service module as well as the Space Launch System (SLS), currently under development for NASA by Boeing. Planned for 2018, the uncrewed mission will entail a lunar flyby followed by reentry into Earth’s atmosphere at extremely high speeds: 11 kilometers per second.

The first manned mission for Orion, which will integrate the ESA service module and the SLS, is proposed for 2021.

APPEL will be providing live coverage of Orion’s first flight, ETF-1, from Kennedy Space Center. Stay tuned to APPEL on Twitter and Facebook to catch all of the news as the launch date, December 4, approaches.

View an animation of Orion, including the ESA-designed service module, on the upcoming Exploration Mission-1.