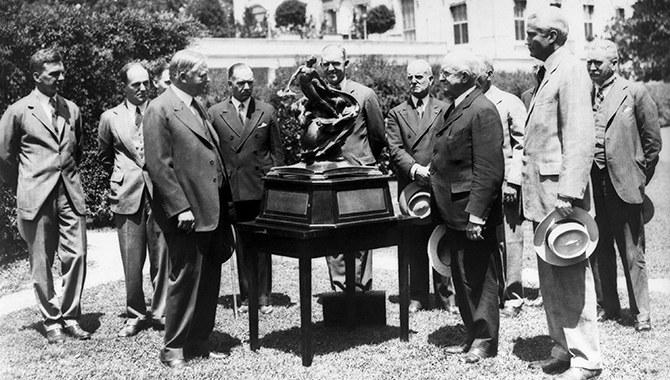 On a windy December day in 1903, two Americans achieved the impossible. With Orville at the controls and Wilbur running alongside, the Wright brothers became the first to successfully design, develop, and fly an engine-powered craft. They were not aloft for long: a mere 120 feet at the equivalent of 34 miles per hour (mph) as they battled a 27-mph wind. But it was enough.

At that moment, America led the world in aeronautics. But it would be more than a decade before the nation resumed its leadership of the field. As soon as the promise of powered flight was realized, Europe embraced the study and applications of aeronautics. Countries including France, Russia, Germany, and Britain created private and public institutions dedicated to aeronautical research. Their efforts were immediately impressive: less than six years after the Wright brothers’ short hop, a French pilot soared across the English Channel.

In the U.S., avionics were pursued with far less zeal. Part of the reason was that the Wright brothers were not considered scientists, and therefore few American scientific institutions sought to embrace and elaborate upon their work. Even as interest in developing a national charter to advance avionics increased, political infighting slowed development of the initiative. It wasn’t until March 3, 1915, that President Woodrow Wilson signed into law the Advisory Committee on Aeronautics. At its first meeting, the committee added the word “National,” and the NACA was born.

The 12-member committee was small and unsalaried, with a budget of only $5,000. But they were passionate about their work and within a decade the U.S. was a leading force in aeronautics again.

Over the course of its 43 years, the NACA achieved major scientific breakthroughs and advanced aeronautics for both military and commercial endeavors. For its efforts, the NACA received the Collier Trophy—an award that recognizes the greatest achievements in aeronautics and astronautics in the U.S. each year—five times.

The NACA received its first Collier in 1929 for creating the low-drag engine cowling. Previously, experts in avionics believed that exposed engines had the distinct advantage of being cooled by the rushing air that passed through them during flight. But this belief was called into question when the NACA built a wind tunnel large enough to encompass a full-size aircraft fuselage, complete with engine, in 1925. One NACA engineer, Fred Weick, examined the amount of drag that airflow produced on an exposed engine. Countering common wisdom, Weick covered the engine with a metal sheath that prevented air from moving through the engine as the plane flew. The result was unexpected: rather than increasing engine heat, the cowling produced better cooling and reduced drag, so that airplanes flew more quickly and farther on less fuel.

The second NACA Collier Trophy was awarded in 1946 for a thermal de-icing system developed by Lewis Rodert. At the time, ice was a serious flight hazard. As World War II loomed, the need for an effective ice deterrent system increased. Several were developed—a pneumatic de-icer as well as chemical de-icers—but none proved adequate until Rodert introduced the concept of a thermal de-icing system. Using two flying research “laboratories”—a modified Lockheed 12A light transport plane and a modified Curtiss C-46 large transport aircraft—he explored the practical applications of heated air in preventing detrimental ice build up on wings, tails, propellers, windshields, carburetors, and other airplane components. He faced detractors over the course of his work, but his findings eventually gained traction among both military and industry users and effectively removed ice as a significant threat to flight.

Supersonic flight—travel beyond the speed of sound, or Mach 1.0—was the focus of the NACA’s third Collier Trophy. On October 14, 1947, U.S. Air Force Captain Chuck Yeager broke the sound barrier in a Bell X-1 rocket plane that had been modified by NACA researchers. That success was based on studies, conducted by NACA scientist John Stack, into the physical laws affecting supersonic flight. Three individuals shared the Collier that year: Stack, Yeager, and Bell Aircraft President Lawrence Bell.

Stack’s work was recognized again in 1951 when the NACA received its fourth Collier. His wind tunnel work on supersonic flight had addressed a critical need to advance airspeed capabilities. But transonic flight—just at, or immediately above or below, the speed of sound—proved more difficult. Wind tunnels designed for supersonic or subsonic research didn’t function effectively at transonic speeds. NACA physicist Ray Wright proposed developing a “slotted-throat” wind tunnel: one with precise, longitudinal ventilation slots in its walls. Stack and his team—including Wright and engineer Vernon Ward—developed both an 8-foot and a 16-foot high-speed wind tunnel, which were successfully used to examine the effects of transonic flight.

In 1954, the NACA received a final Collier Trophy. The focus of this award was the area rule: a discovery that, like Stack’s work in 1951, involved transonic flight. Researchers noted that as an airplane approached the speed of sound, drag increased notably, slowing the plane and reducing its speed. This was of enormous concern because transonic speed was emerging as a key range for both military and commercial endeavors. The problem appeared to be the speed of the airflow around the body and wings of the aircraft as it traveled between Mach 0.75 and 1.2. As the airflow approached Mach 1, it produced shock waves that were larger and less predictable than anticipated, resulting in significant drag. Adding more powerful engines to aircraft didn’t solve the problem. Streamlining aircraft by reducing wing or tail volume didn’t solve the problem. For a period of time, the solution appeared out of reach.

That changed with an inspired realization from NACA engineer Richard T. Whitcomb. While sitting at his desk at Langley, Whitcomb determined that the solution was to modify the design of a plane’s fuselage. Using transonic wind tunnels, he ascertained that by reducing the thickness of the fuselage—the cross-sectional area of the aircraft where the wings and tail attach—drag was reduced. His proposed design, a pinched-waist plane, effectively enabled it to course past the sound barrier more quickly and smoothly than before.

As the end of the 1950s approached, the U.S. began to focus on developing a space program that would surpass the efforts of the Soviet Union. The NACA was an important part of this effort: by early 1958, the organization had launched a space satellite and was ready to expand its purview beyond aeronautics. That opportunity arose on October 1, 1958, when the National Aeronautics and Space Administration (NASA) opened its doors and incorporated the NACA in its entirety. But while the name and mission of the organization evolved, its commitment to scientific excellence did not waver. Poised now on the brink of advancing the frontier of human spaceflight to Mars, NASA has received the Collier Trophy 19 times, most recently in 2012 for the efforts of the NASA/JPL Mars Curiosity Team.

Learn more about the NACA.

Read a detailed history of the NACA.