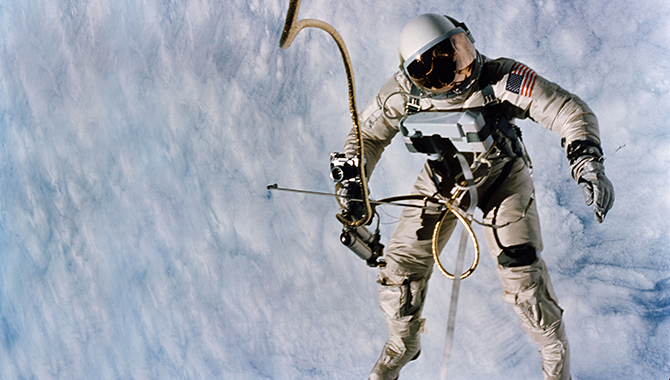 Fifty years ago this month, the Gemini IV mission set out to answer a critical question: can human physiology withstand the rigors of long-duration spaceflight?

In 1965, the international space community was concerned about the physiological and psychological consequences of spaceflight. Extreme drops in temperature, pressure, and oxygen, plus the body-deconditioning effects of prolonged weightlessness, were considered by some to be insurmountable barriers to spending even two weeks in space.

These concerns were not new. They had dogged Alan Shepard before his successful flight, in 1961, as the first American astronaut in space during Project Mercury. They regained traction after cosmonaut Alexey Leonov conducted the first spacewalk and Russian reports suggested he was disoriented during the experience. As a result, one of the key objectives of Project Gemini was to determine once and for all whether humans could remain oriented and functional during prolonged spaceflight. The answer to this question would determine whether NASA could achieve President Kennedy’s goal of landing on the moon.

The astronauts involved with Project Gemini were less concerned about this basic question; they had already seen the Project Mercury crew return able-bodied from their flights. They were more interested in a different goal: performing the first American extravehicular activity (EVA). Although the Russians had already executed a spacewalk during a single-day mission, Gemini IV intended to include it as part of a four-day endeavor that would be the longest manned spaceflight to date.

These were not the only objectives of Gemini IV. The astronauts, U.S. Air Force pilots James McDivitt and Edward White, also intended to conduct the first on-orbit rendezvous with the spacecraft’s second stage booster and test the mission-control capabilities of the new Manned Spacecraft Center (MSC)—later to become the Johnson Space Center (JSC)—in Houston, Texas.

On June 3, 1965, Gemini IV rode a Titan II into orbit. The second stage booster separated as planned and the crew began chasing it down for the rendezvous. But things didn’t go as expected. Each time the crew spotted the booster, they increased their speed—yet the booster appeared to float farther away. After running through nearly half of the mission’s fuel, they abandoned the rendezvous attempt to focus on the EVA.

The spacewalk started inauspiciously when the hatch refused to open. Eventually White popped it open and took his first steps out into space above Hawaii. He was attached to the spacecraft by two lines, including a 25-foot umbilical tether that provided oxygen and communications. To move around, he used a Hand Held Maneuvering Unit (HHMU) known commonly as a zip gun. The HHMU, which worked by expelling pressurized oxygen, functioned well. But after three minutes the fuel ran out and White had to resort to pulling on the tether to complete the EVA.

Twenty-three exhilarating minutes later, White was safely back inside the capsule. He and McDivitt turned their attention to the 11 science experiments that were part of their mission. Ranging from a simple navigation experiment designed to support the upcoming Apollo Program to weather studies that would advance understanding of Earth, many of the experiments were successful but a few were limited by the lack of remaining fuel.

The main problem for the mission occurred 75 hours into flight. During a planned computer update, the instrument failed to respond. Attempts on the ground to solve the problem proved futile so the Gemini IV mission had to abandon its final objective: computer-controlled reentry. Instead, they relied on a Project Mercury-style rotating reentry that brought them safely back into Earth’s atmosphere but left them 80 kilometers off target. Nonetheless, within an hour both astronauts were safely aboard the U.S. aircraft carrier Wasp.

But their work wasn’t done. As part of the original plan to evaluate the effects of prolonged spaceflight on human physiology, the astronauts were subjected to 66 hours of medical examinations. No major problems were noted. Both were tired after their four-day mission, but neither was weak or ill. The expected microgravity-associated bone loss had occurred yet the feared disorientation had not. Based on findings from Gemini IV, manned missions to the moon seemed within the realm of possibility. Four years later, NASA made them a reality.

Ultimately, Gemini IV evoked the highest public interest of all the Gemini missions. The launch was broadcast on TV across the U.S. and to 12 European countries. The mission tested many of the technologies the agency would need for its lunar missions, and while White and McDivitt didn’t manage a successful rendezvous, that goal was reached a few months later with Gemini VI-A.

Most importantly, the mission confirmed the ability of the human body to withstand the rigors of long-duration spaceflight. Fifty years later, NASA is continuing that tradition with work aboard the International Space Station and elsewhere that will expand the frontiers of manned spaceflight, laying the groundwork for a crewed journey to Mars.